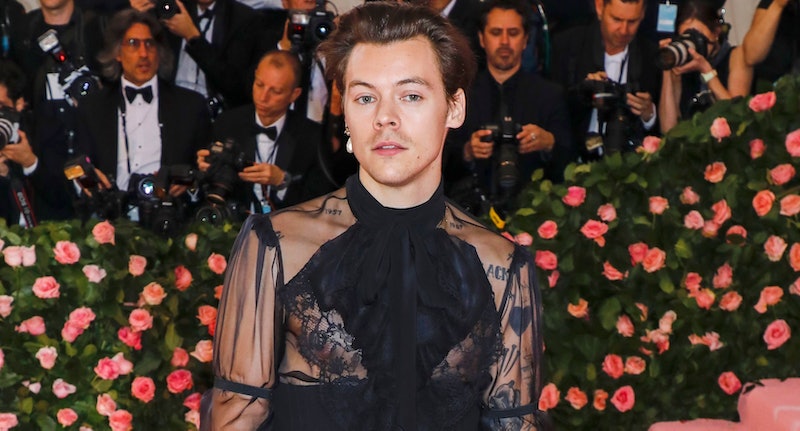 As one fifth of One Direction, Harry Styles has had a spotlight on his style for as long as he’s been on the stage. But as his solo career has blossomed, so too has his fashion-forward style. Gone are the skinny jeans and Hollister T-shirts of the X Factor era. Even the patterned Hawaiian shirts of 2016 have made way for pussy-bow blouses, vibrant flared suits, and high-waisted trousers, spurred by the 26-year-old’s notable affiliation with Gucci and the Italian fashion brand’s creative director, Alessandro Michele. Given his penchant for whimsy and preference for named brands, naturally the autumn/winter 2020 catwalk provided a number of inspirational looks that had Harry Styles written all over them.

With a string of award shows and public appearances already under his belt this year, the "Watermelon Sugar" singer has really taken the opportunity to really express his fashion prowess. At the Brit Awards 2020 alone, not one, but three looks set him apart from the rest of the attendees; he first appeared on the red carpet in a Willy Wonka-esque suit, before changing into a head-to-toe white lace Gucci look complete with matching braces for his solo performance on the night, and a bright yellow two-piece suit and accompanying purple pussybow blouse that Austin Powers would have been proud to own.

“Harry has always been keen to experiment with fashion and is never scared to try something new,” stylist Harry Lambert, who has worked with Styles for some time on his red-carpet looks to his latest album cover, told British Vogue in an interview. “Over the years we have worked out what he likes and doesn’t like. It has been a natural progression of experimentation...” Experimentation that has seen pussybow blouses, pastel tailored suits—along with flared trousers—, diaphanous shirts and ruffled trimmings become a regular part of the singer’s repertoire.

As he gets ready to tour his second album, Fine Line, from April 15 to October 19, here are five looks from the autumn/winter 2020 shows that we'd absolutely love to see Styles try out on stage.