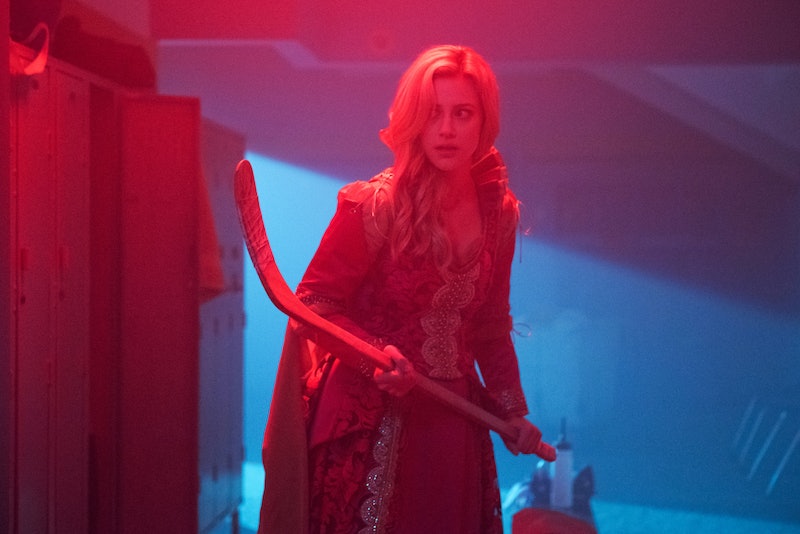 When Betty Cooper has a premonition about something, it's best to pay attention. So when Veronica told her that her father, Hal Cooper, had died, Betty knew something was up. We never actually saw him get killed, which on a show like this, is a sure sign that he's still out there somewhere. And now that the Black Hood is back, Betty is convinced her dad is behind the mask. Still, there are a few other theories about the "new" Black Hood on Riverdale that suggest the show is trying to, quite literally, pull the wool over our eyes.

The kids are typically more attentive than the adults on Riverdale, so Betty's Nancy Drew-like intuition certainly shouldn't be ignored. Not to mention the fact that she likely knows her own father when she sees him, whether he's wearing a terrifying mask or not. But even though she repeatedly called the Black Hood "dad" while he was attacking her at prom in last week's episode, the assailant never spoke to her, so his/her identity is still up in the air. So here are a few possibilities as to who else could be behind the mask. (We've already gone through three versions of the Gargoyle King, so why not throw in a copycat Black Hood too?)

We all know there's something shifty going on at The Farm, and why would Edgar invite Betty to stay with them if he didn't have an ulterior motive? It's obvious that he wants his future stepdaughter to join his cult, and perhaps terrorizing her as the Black Hood was his way of getting her there.

Is it just a coincidence that Jug's mom skipped town the same episode that Hal Cooper went missing? Perhaps they're in cahoots together, and she helped him escape. We already know that she has a checkered past, so scheming with a serial killer isn't that far out of the question.

Is this one too wild? Veronica's ex-boyfriend certainly has the same build as the Black Hood who attacked Betty at prom. And now that he and Ronnie are over, perhaps this is his way of acting out and getting back at her — by attacking her best friend. While it's not really in line with his character, that hasn't stopped Riverdale before!

This is similarly out there, but we haven't seen Kevin's ex-boyfriend since he left town. So perhaps he's been brainwashed during his time away and has returned to wreak havoc on the town that brought him so much grief. Hey, it could happen!

The last time we saw the imposter masquerading as Betty's long-lost brother, the Black Hood was chasing him down to kill him. Perhaps he escaped and has returned to get even with the rest of the Cooper family. That would explain why the hooded figure targeted Betty and is presumably headed for Alice next.

Fans had similar theories about Hiram being the Black Hood last time around (and he kind of was), so he could very well be a copycat. After all, he's done it before. Plus, Mr. Lodge is always doing nefarious things, so it would certainly be in line with what we know about his character.

Whether this Black Hood 2.0 is the same as the old one or is merely filling Hal's empty shoes, we'll likely find out soon; the Riverdale finale airs next week, and hopefully it will tie up most of these loose ends.