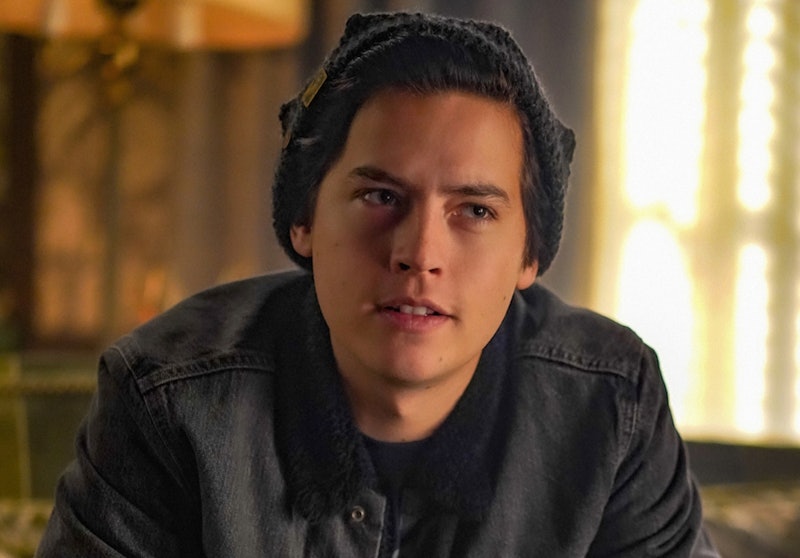 If Riverdale has taught us anything, it's that nothing is ever as it seems on the show. So it's no surprise that many fans aren't convinced that Jughead really dies. Sure, we've seen his lifeless body, but there are also a lot of clues that Jughead is still alive. This prolonged mystery may be meant to build suspense, but all it's really done is give fans time to cull together evidence that Cole Sprouse's character isn't going anywhere. See for yourself below.

Jughead Told Betty He Had A Plan

Before going to that fateful Ides of March party, Jughead told Betty he had a plan, but that first, he needed to take care of the leverage Bret was holding over them (aka the tape he secretly filmed of Jug and Betty having sex). After, Jug swore to Betty, "I will tell you everything. It's all going to be OK. I promise."

Viewers have long speculated that Jughead faked his death; this could have been his way of telling Betty not to worry.

We Didn't See The Murder

The Show Has Done Death Fakeouts Before

Riverdale made it seem like Jughead's grandfather was dead, that the Black Hood killed Chic, and that Chic had killed Betty's brother Charles, but all of them ended up being alive. On Riverdale, no one is dead until they really, really are. And maybe not even then.

As Newsweek noted, in the original flash-forward where Archie, Betty, and Veronica are burning Jughead's beanie, they're all covered in blood. If only Betty killed Jughead (and in a pretty minimally bloody way), where did all of that blood come from?

Jughead Knows How To Stage The Perfect Murder

The Baxter Brothers contest prompted students to write the perfect murder. Maybe through his research, Jughead learned how to stage a murder to make someone else look guilty, and he's now faking his death as a way to get back at Bret and prove he didn't plagiarize the Baxter Brothers book.

Jughead Narrated His Own Murder

In the scene where Archie and Veronica find Jughead's body, Jughead's narration said, "It started out like any other week. Who would have guessed that by Friday night—" and then Archie proclaimed, "He's dead!" As Hypable questioned, if Jughead was really dead, then why was he still talking in the narration about events he couldn't have otherwise known about? Are we meant to think he was narrating from beyond the grave?

For someone who supposedly just murdered her boyfriend, Betty does not seem that upset in any of the flash-forwards. Her calm manner may indicate that she's in on the plan and just acting (not very well) like a bereaved girlfriend.

The Show Dropped In A Tiny Clue

As one Reddit fan theory pointed out, in the second episode of Season 4, Veronica was seen reading the book The Secret History by Donna Tartt. Unlike how Riverdale changes most of its real world references (Vanity Fair is Vanity Flair, American Express is American Excess, etc.) the real name and author of the book was left as is for this scene. And that may have been because it's a big clue.

The Secret History is a detective story about a working class kid named Richard who becomes friends with a group of students from an elite school. When the students murder a classmate, Richard helps cover it all up. Furthermore, Tartt was college friends with fellow author Bret Easton Ellis (who Bret Weston is named after), and there's another Stonewall student named Donna Sweett, which seems to be a reference to Tartt. All of this could signal that Jughead is the Richard of Riverdale, but instead of murdering a student and covering it up, he faked his own murder to pin the blame on Donna and Bret.

Last but not least, it's extremely unlikely that Cole Sprouse is leaving the show, which means Jughead basically has to live. Now, it's just a matter of how.

More like this
Are Michael & Sierra Still Together After Bachelor In Paradise?
By Kadin Burnett
'The Rings Of Power' Episode 7 Will Feature An “Unlikely Pairing Of Characters”
By Grace Wehniainen
'Firefly Lane' Season 2 Will Be The Show's Last — But There's A Twist
By K.W. Colyard and Grace Wehniainen
The ‘Kevin Can F**k Himself’ Season 2 Finale Twist Is A Full Circle Moment
By Grace Wehniainen
Get Even More From Bustle — Sign Up For The Newsletter