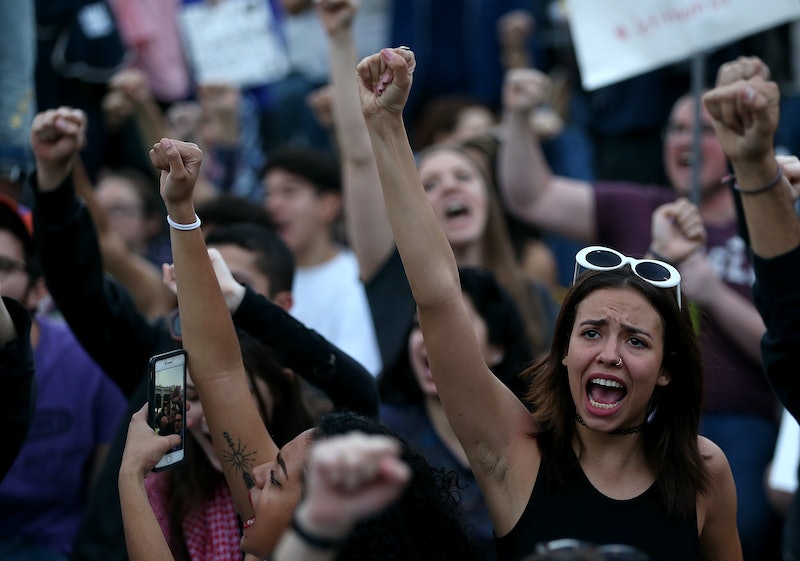 Since Donald Trump became president, people around the world have publicly expressed concerns about his ability to effectively govern. In response, protestors are inventing creative new ways to peacefully resist Trump — and these productive acts of resistance are quickly becoming the bedrock of life in these uncertain and frightening times.

Peaceful protest is a hallmark of American democracy — it's protected under the First Amendment to the U.S. Constitution — and over the past several month, people have been exercising their right to peacefully protest with a will. Since Trump became president-elect Nov. 8, protestors in cities across the country (and around the world) have vocally opposed his policies. In the mere 10 days Trump has actually been president, almost 3 million people gathered at more than 600 marches to express outrage over Trump's attacks on women, climate change, people of color, the LGBTQIA community, people with disabilities, and immigrants.

Another example: When Trump implemented executive order temporarily placing severe restrictions and bans on immigration last Friday, people turned up at airports globally to resist the policy. The ACLU worked tirelessly to get a temporary stay on Trump's ban to help people who were effectively waiting in limbo be able to enter the country.

Others are peacefully protesting in more non-traditional ways, too. Here are nine of them — which, hopefully, might offer some inspiration for how you can peacefully resist Trump's presidency, too.