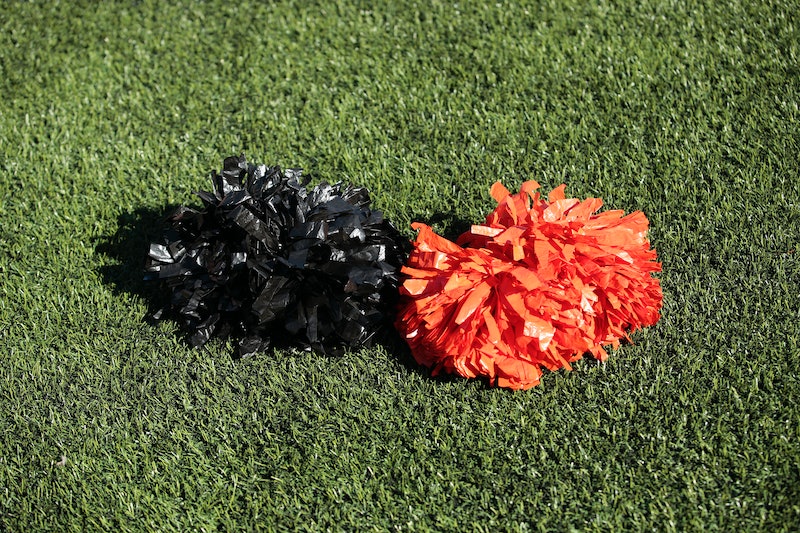 A Georgia college student has filed a lawsuit against Kennesaw State University's administrators and a sheriff following her national anthem protest last year. The Kennesaw State University sophomore Tommia Dean sued after cheerleaders knelt during the anthem, alleging that the former university president, a county sheriff, a state representative and athletic department officials violated her First Amendment rights by later prohibiting the cheerleaders from kneeling.

Dean was one of the five cheerleaders who took a knee — to echo Colin Kaepernick's infamous protest — in September 2017 in the end zone of the university's stadium about 30 miles outside of Atlanta. Dean's lawsuit was filed Wednesday in federal court.

Dean's lawsuit states that the cheerleaders started discussing Kaepernick's protest because, unlike the college football players, they were still on the field when the national anthem played. "The KSU cheerleaders learned that other college cheerleaders had knelt during the playing of national anthem, and decided, after prayer and discussion, that they would do the same," according to the lawsuit.

Dean knelt at the Sept. 30, 2017 game, along with four other cheerleaders.

The lawsuit then alleged that word of their actions spread. According to the lawsuit, Olens emailed the school's vice president for student affairs to express his concern about the protest and state Rep. Ehrhart called Whitlock to say that the cheerleaders should not be able to kneel, according to the lawsuit.

The next day, Oct. 2, however, the state's Attorney General’s Office advised presidents of the University System of Georgia, including Olens, that students couldn't be told not to kneel if they weren't being disruptive, according to the lawsuit.

Despite this, the lawsuit alleged, Olens told Ehrhart that the cheerleaders wouldn't be kneeling again. The lawsuit also cited text messages that Sheriff Warren wrote about Olens' involvement. "Not letting the cheerleaders come out on the field until after national anthem was one of the recommendations that Earl [Ehrhart] and I gave him [Olens]!" Warren wrote, according to the lawsuit.

At the next football game, held at Fifth Third Bank Stadium, Dean and three other cheerleaders took a knee in the locker room tunnel, where students were kept until kickoff, according to the Marietta Daily Journal. The newspaper published photos of the women's protests.

Dean has suffered physical symptoms, the suit alleged, over the incident. "As a result of the conduct of Olens, Whitlock and Griffen [sic], Plaintiff Dean has suffered actual compensable injury, including the onset and increase in migraine headaches and emotional distress over the loss of her constitutional rights an [sic] the threat of retaliatory action," according to the lawsuit.

According to the Marietta Daily Journal, all five of the women who knelt tried out for the cheerleading squad the next year, but only one was named to the squad.

In late 2017, there was pressure on Olens to leave his post because of his handling of the cheerleaders' protests, according to the Atlanta Journal-Constitution. It was later announced that Olens would leave the university on Feb. 15, 2018.