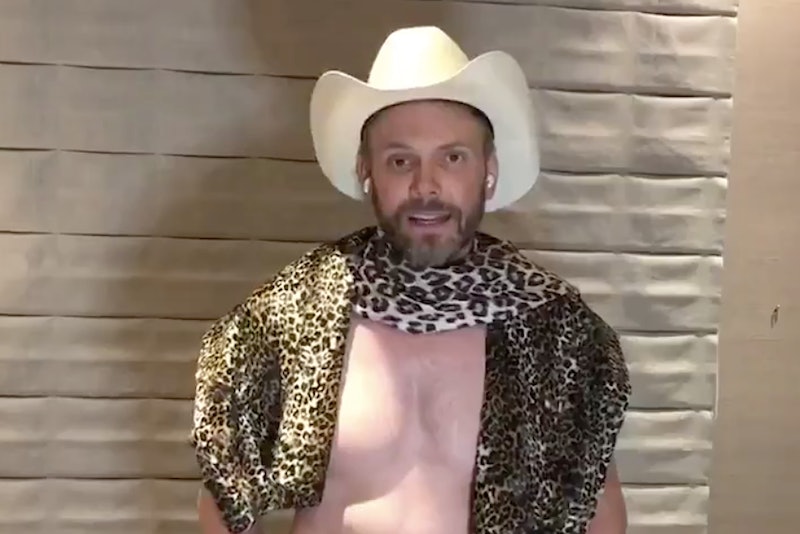 Prepare yourselves, cats and kittens: Netflix has confirmed a new Tiger King episode will debut on Sunday, April 12. The after show, titled The Tiger King and I, is hosted by Joel McHale and will include new interviews with John Reinke, Joshua Dial, John Finlay, Saff, Erik Cowie, Rick Kirkman, and Jeff and Lauren Lowe. Per a release from Netflix, it will give the show's subjects "a chance to tell their story directly, giving us inside info, opinions, and insight” about what's happened in their lives since the series went viral. "It's eye opening and — hopefully — funny," McHale said in the announcement video.

The news comes several days after Jeff Lowe, the current owner of Joe Exotic's zoo, teased the new episode's arrival in a Twitter video addressed to Los Angeles Dodgers' player Justin Turner. "Netflix is adding one more episode, we'll be on next week. We're filming here tomorrow," he revealed. Afterward, Joe Exotic's husband, Dillon Passage, said on Andy Cohen's SiriusXM radio show Radio Andy that it would "be a live episode, kind of like a reunion," but that he wouldn't be appearing. "Netflix didn't contact me to be a part of that," he said. "I only spoke with one of the producers a little while about it because I was asking her. I saw an article saying there was gonna be another episode dropped and I was kind of curious."

The same goes for Joe Exotic's longtime rival Carole Baskin, who slammed the docuseries as "salacious and sensational" on her website. "We have not been approached about a new episode and would not participate if asked," a representative for Baskin told Entertainment Weekly in a statement.

Nonetheless, she'll likely have more to say after the new episode drops.