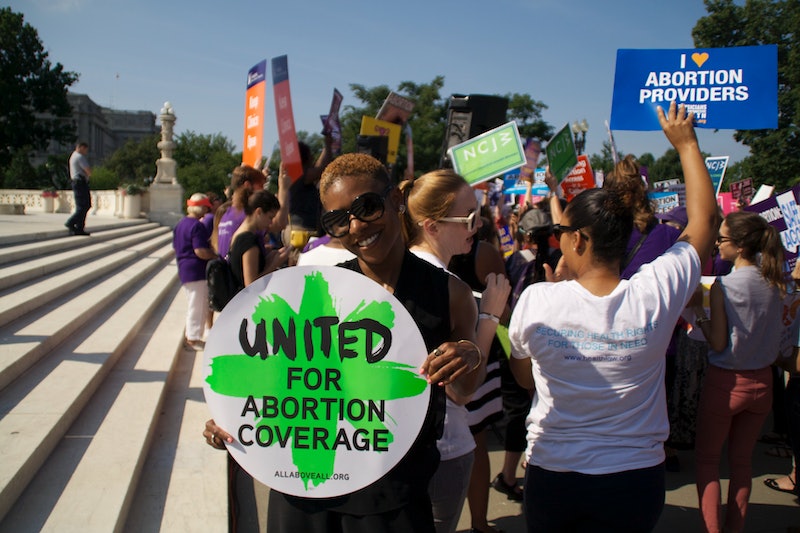 It’s been easy to fall into a swamp of despair in the political world that 2017 has to offer, especially if you care about protecting reproductive rights. The election of Donald Trump, who promised to appoint pro-life judges and at one point suggested women who sought illegal abortions should be punished (he later walked back that comment), isn't the only disheartening part. Republican-controlled state legislatures have already started chipping away at abortion access in the wake of Trump's victory, with Ohio and Texas passing new restrictions late last year.

But one advocacy group is not shying away from a fight. In a campaign launched on Sunday, pro-choice group All* Above All called out the punitive Hyde Amendment, which prohibits any federal dollars from going toward abortions. A lesser-known symptom of the Hyde Amendment is that it forbids Medicaid from covering the procedure, disproportionately affecting low-income women, often women of color.

Destiny Lopez, co-director of All* Above All, told Bustle that she sees the campaign as a way to push back against the anti-choice push, which she argued is misogynist and racist in nature. “The primary attack on abortion access is still on women enrolled in Medicaid,” Lopez tells Bustle. “Those women are disproportionately young, they’re disproportionately women of color, which is why we’re focusing our campaign on those communities.”

The campaign consists of mobile billboard, taxi, and newspaper insert ads in the Washington, D.C. area, as well as a national digital ad buy. The ads call out the “Trump/Pence Agenda For Women” as intending to “Punish/Shame/Bully poor women for seeking abortions.”

“We just launched the campaign in January, first to call out extreme anti-abortion politicians who support the Hyde Amendment, and who also support other bad policies that punish women who need abortion care,” Lopez said, noting that the purpose of the D.C. focus was to embolden pro-choice legislators, even if they are in the minority.

“It’s going to be relentless, but folks will need to be in front of Congress in any way that they can.”

But the campaign is not just targeted at lawmakers. All* Above All is encouraging pro-choice advocates “to get in front of their Congresspeople,” Lopez says. “That’s not just sending an email or making a phone call, but going to the district office when members are home, or even when they’re not home, and making their voices heard.”

Medicaid restrictions on abortions have real measurable consequences. One 2009 study from the Guttmacher Institute found that one in four poor women are forced to carry an unwanted pregnancy to term due to lack of funds to pay for the procedure.

In addition to the push to repeal the Hyde Amendment, All* Above All is aiming to fix this discrepancy with the Equal Access to Abortion Coverage in Health Insurance Act, or the EACH Woman Act. This legislation was introduced in July 2015 by Rep. Barbara Lee, a California Democrat, and it is expected to be reintroduced later this month. If passed, the law would restore abortion coverage to any woman receiving health insurance from the federal government, including Medicaid recipients, military personnel, and federal employees. According to Lopez, the bill had nearly 130 co-sponsors in Congress during the last session.

“It gives members of the House something to stand for,” Lopez said. “It’s a way to show our values rather than constantly being in a reactive state.”

As for the next four years, activists like Lopez and her supporters are geared up. “It’s going to be hard, it’s going to be one battle after another,” Lopez said. “I mean, we haven’t even been back a day and we’ve already had some shenanigans happen,” she added, referring to Tuesday’s flap over House Republicans’ efforts — and then back steps — to gut the Office of Congressional Ethics.

“It’s going to be relentless, but folks will need to be in front of Congress in any way that they can.”