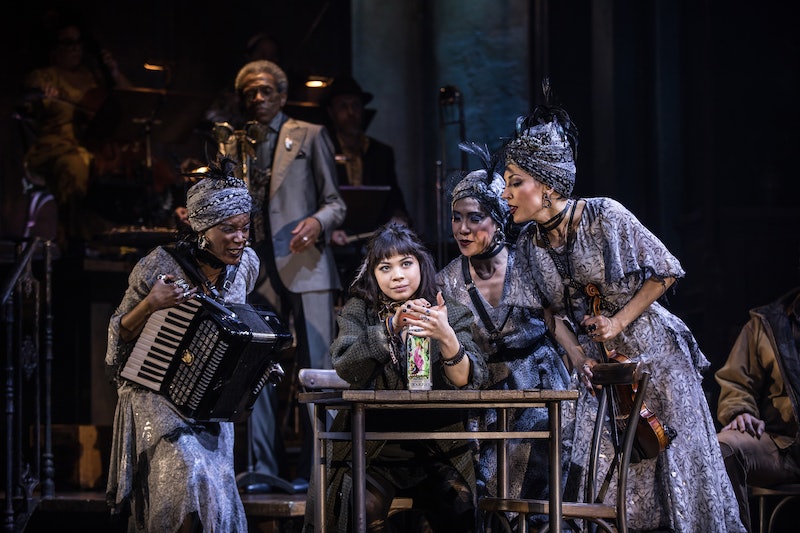 Female singer-songwriter in Hollywood are everywhere, but historically, it's been far rarer for women who write music to make it on Broadway. In recent years, though, things have been slowly changing, and 2019 saw a major step forward thanks to folk singer and Tony nominee Anaïs Mitchell. With Hadestown, an enchanting folk/steampunk adaptation of the Orpheus and Eurydice myth that opened in April, Mitchell became the first woman to write the music, lyrics, and book of a musical on Broadway in over a decade.

To be fair, it's rare for a single person to be credited with all of those aspects of a musical, but it's notable that only three other women — Jill Santoriello (A Tale Of Two Cities ) in 2008, plus Elizabeth Swados (Runaways) and Micki Grant (Don't Bother Me, I Can't Cope) in the '70s — have done the same feat as Mitchell in all of Broadway history. The short list is in stark comparison to the many men, from Mel Brooks (The Producers, Young Frankenstein) to Eric Idle (Spamalot) to Jonathan Larson (Rent) to Lin-Manuel Miranda (Hamilton), who have also taken on those roles for their musicals.

So why is it that Broadway, a seemingly inclusive and often female-driven space, has had so few women-led creative teams? "Producers," Mitchell suspects, speaking over the phone. "In terms of people trusting women and people of color with the money that it takes... it takes a lot of money, and it seems like the people who have that money tend to be white men."

The good news is that of the seven musicals written entirely by women in history, which includes collaborative teams, three were produced in the last five years alone. In addition to Hadestown, there's the Best Musical Tony-winning Fun Home and the long-running Waitress. In addition, Lucy Simon and Marsha Norman's The Secret Garden has been slated for a Broadway revival soon.

Yet Hadestown, which has received 14 Tony nominations, stands out from the pack. In addition to being written by Mitchell, the show is directed by Rachel Chavkin (Natasha, Pierre, and the Great Comet of 1812). Mitchell recalls bringing her daughter to see the Hadestown marquis and watching as the kindergartener gleefully recognized both women's names.

"I don't think that often about the fact that we are both women," Mitchell says now, "but when I showed that sign to my kid, I felt proud. I felt proud to be able to show her a Broadway marquee with two women's names on it. And that will be normal for her."

Hadestown started as a community theatre project in 2006, and the songs were recorded as a concept album in 2010. "I had always wanted to develop the piece further for the stage," explains Mitchell. "It just took a while to figure how to do that and who to work with. I had moved to New York and I was seeing a bunch of shows and kind of feeling like, oh man, [Hadestown] is never going to fit that mold."

Yet after catching an early production of Chavkin's Great Comet before it went to Broadway, Mitchell quickly realized that the director was the person that she needed to work with in order to bring her musical vision to life. "She has this super power," says Mitchell of Chavkin. "She's bringing downtown shows uptown."

Together, the two women are "putting their weight on the scales," Mitchell says, similar to the female characters of their show. In Hadestown, the women know the world for what it truly is, and they're also the ones who seek to change it. Eurydice "chooses the relative wealth and security of the underworld above her unpredictable life of poverty with her lover," says Mitchell, while Persephone and Hades are "equal Gods in opposition to each other and trying to restore the balance of their marriage."

Through Mitchell's words, epic Greek myths are given an excitingly feminine twist, and hopefully, the show's success will lead the way for more must-see musicals written entirely by women.

More like this
Ramin Djawadi Is Living Out His Dreams
By Rebecca Long
On 'The Handmaid’s Tale,' Christine Ko Fights Back
By Gretchen Smail
Jinkx Monsoon Is About To Get Real Sketchy
By Sam Ramsden
The New Bachelor Will Be Announced Next Week & Here Are The Top Contenders
By Grace Wehniainen
Get Even More From Bustle — Sign Up For The Newsletter