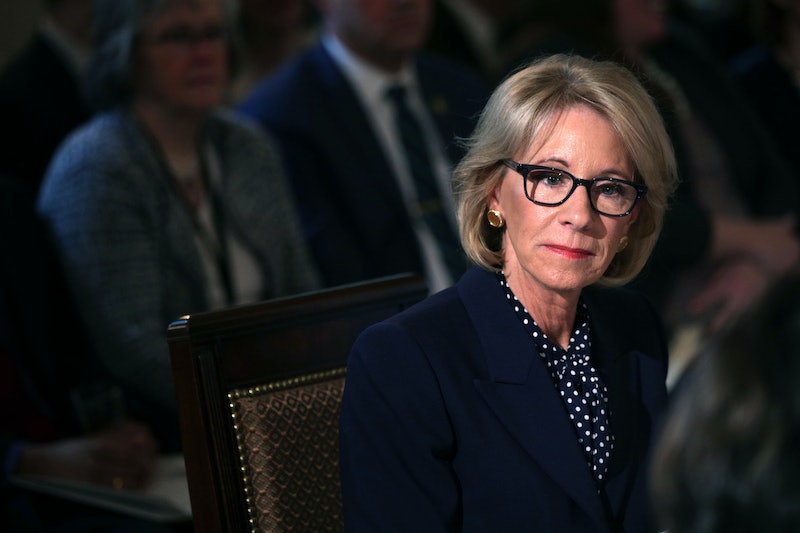 During a House Committee on Education and Labor hearing on Wednesday, Education Secretary Betsy DeVos shared an admission that seemed to startle some members of Congress. While testifying, DeVos said when she rolled back transgender student protection guidance in 2017, that she was aware that discrimination and harassment could have an adverse impact on student performance and mental health.

Rep. Suzanne Bonamici broached the subject, asking the education secretary if she was aware of the adverse effects that harassment and discrimination can have on transgender students, according to video footage of the hearing that circulated online. DeVos initially attempted to sidestep it.

“I would really like an answer," Bonamici said, according to video footage. She posed her question a second time: "Students and families need to know this… Did you know when you rolled back the guidance that the stress of harassment and discrimination can lead to lower attendance and grades, as well as depression for transgender students? Did you know that when you rolled back the guidance?"

"I do know that," DeVos responded. "But I will say again that [the Office of Civil Rights] is committed to ensuring that all students are — have access to their education, free from discrimination."

In February 2017, the Trump administration announced that it was rolling back guidance that allowed students to use bathrooms and other school facilities that correspond with their gender identity, according to The Hill.

At the time, The New York Times reported that DeVos initially resisted the idea, which was reportedly championed by then-Attorney General Jeff Sessions. However, per The Times, she ultimately signed off on the plan to rescind the guidance.

After the hearing, Bonamici released a statement regarding DeVos' remarks in committee.

"I’m troubled by Sec. DeVos’ answers to my questions during today’s hearing," Bonamici said in the statement. "The Department of Education has a responsibility to protect all students, but she acknowledged that she moved forward with a plan to rollback protections for transgender students despite knowing that it would put them at risk."

While testifying before the committee, DeVos also told representatives that she was "not familiar" with guidance related to affirmative action, which her department rolled back last summer, according to Politico. Among the guidance peeled back, per Politico, were Obama-era instructions advising schools on how to include diversity and race when considering whether or not to accept students.

That Supreme Court decision ruled that while promoting student diversity is important for school districts, they may not use race as the second-most important tiebreaker when making admissions decisions. The Obama-era affirmative action guidance was partially based on that decision, per Politico.

"I'm not familiar with that particular case," DeVos told the committee, according to Politico.

DeVos has faced significant criticism during her tenure as education secretary, and on Wednesday, some of that pushback came from Congress. But while she acknowledged the potential risks involved with peeling back guidance protecting transgender students, the decision to do so remains in effect.