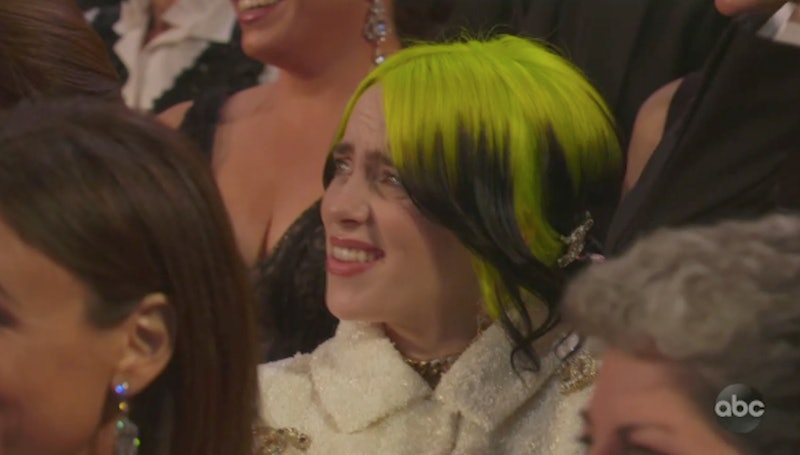 Nothing stings like shade from a Gen Z kid, but in the case of Billie Eilish's reaction to Maya Rudolph and Kristen Wiig's Oscars song, it might not have been what it seems. In fact, it might not have been shade at all. Eilish's face during the Oscars was a split second of screen time, and fans are already calling it her reaction to comedians Wiig and Rudolph, but was it really?

Here's a little award show secret: Fans at home aren't the only ones who get to see the reaction shots. Though rarely shown during the show, there are usually big screens to the side of the stage that show the audience in the theater what's being shown on our TV screens, and that includes audience reactions. At first glance, Eilish's look of confused disgust might seem like it was a reaction to Rudolph and Wiig's impromptu song about costume design. But, if you look closer, it actually seems like it's the disturbed and embarrassed reaction of a young woman who just realized her face is being projected on a 10-foot tall screen in front of her, and being broadcast to millions of homes across the world. It's not called shade; it's called being uncomfortable.

People at home were quick to dismiss Eilish's reaction as the face of a person too young to remember when Rudolph and Wiig were killing it on Saturday Night Live or bringing comedy back to the Oscars in Bridesmaids.

Of course, fans were quick to defend the singer, noting that when the camera initially turned to Eilish, she was clearly enjoying the bit.

It should be noted that many viewers were just happy to get a good reaction shot out of the night.

Chrissy Teigen's iconic Oscar meme needs a successor, and Billie Eilish might just have taken over that title, no matter what she was really reacting to.

More like this
Jason Derulo Is Launching A New Singing Show In The UK
By Maxine Harrison
Everything To Know About Taylor Swift’s 10th Studio Album, 'Midnights'
By Grace Wehniainen and Jake Viswanath
Twitter Is Freaking Out Over Rihanna’s 2023 Super Bowl Halftime Show Announcement
By Stephanie Topacio Long
Kanye West Apologizes To Kim K "For Any Stress I Have Caused" In Rare Interview
By Jake Viswanath
Get Even More From Bustle — Sign Up For The Newsletter