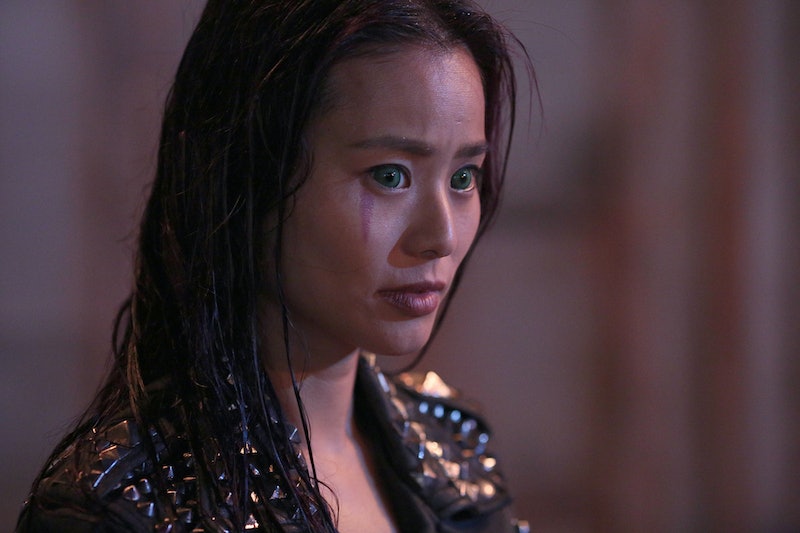 Jamie Chung, who plays a teleporting mutant on The Gifted, has been all over your TV recently taking on familiar worlds and iconic fan favorite characters in roles on Gotham and Once Upon A Time. Blink's Marvel comics history means The Gifted is keeping that streak alive. Chung's new role should excite long-time and new fans of the X-Men mythology.

The casual X-Men fan might even remember the character of Blink from Days of Future Past, in which she was played by actor Fan Bingbing. That version of Blink didn't speak much, but participated in the battle against the sentinels that bookended the film in a dystopian future. Another version of the character is fighting against a different kind of sentinel in The Gifted: a government agency that targets mutants. But she still has the power to create small portals with her hands and hop out of sticky situations, just like we saw in Days of Future Past.

In an interview with Comic Book Resources, The Gifted executive producer Matt Nix said, "What I love about Blink is her powers are sort of like, 'I’m out of here. Screw you guys.' There’s that attitude. She has her own mind about things. She’s working with the Mutant Underground, but she’s not a joiner. If there were uniforms, she wouldn’t wear one. She’s very independently minded."

In the comics, Blink's given name is Clarice Fergusen. She's actually related to Apocalypse, the villain most recently played by Oscar Isaac. She is also often one of Magneto's followers and was once bewitched and recruited to a team of deadly mutants by the villain Selene. What X-Men character hasn't been morally grey from time to time? That's one of the best things about these characters. They're always dancing between dark and light.

Blink has purple skin in the comics, pink hair, and bright green eyes. She's also got some distinctive face tattoos. Blink has the mutant ability to warp teleportation by creating portals. Her range is to the moon and back, as far as she knows. At full power, Blink can manifest and throw displacement bursts at enemies and cause them to teleport away from a fight. When her powers are waning, she sometimes uses malfunctioning portals to cut people up.

In one version of her origin story, Blink was kidnapped and experimented on by aliens looking for new mutants — then recruited by her heroic saviors. At that time, she was unable to control and afraid to use her powers. The first portal knocked her unconscious and she woke up in a pool of blood. She actually accidentally killed herself, which is how she came to be resurrected and part of Selene's death squad.

In another version, Blink was adopted by Sabretooth and trained by him in combat. Then she went on to run a team called the Exiles. This team was assembled by pacifist aliens who accidentally damaged the Omniverse and gathered heroes from various alternative universes to right their wrongs. It's kind of like the Marvel version of both Legends Of Tomorrow and The Flash combined with just a little bit of Harry Potter And The Cursed Child thrown in there, as the Exiles encountered lots of new versions of fan favorite characters on their various missions. In that storyline, she wields a device called a tallus that allows her to teleport between universes.

There's already more to Blink than meets the eye. (Sorry, couldn't resist.) X-Men: Days of Future Past may have done an impressive job bringing her to the screen visually, but the X-Men character has a lot of really interesting history that has not yet been explored on screen. That means The Gifted and Chung have plenty of universe-bending material to work with.

More like this
The First 'Percy Jackson & The Olympians' Teaser Comes With An Ominous Warning
By Grace Wehniainen
Nicola Coughlan Shared A Lady Whistledown Excerpt From ‘Bridgerton’ Season 3
By Grace Wehniainen, Alyssa Lapid and Sam Ramsden
A New 'And Just Like That' Table Read Pic Confirms A Key Character's Return
By Jack Irvin and Grace Wehniainen
You’ll Definitely Recognise Both Of Ty Tennant’s Parents
By Maxine Harrison
Get Even More From Bustle — Sign Up For The Newsletter