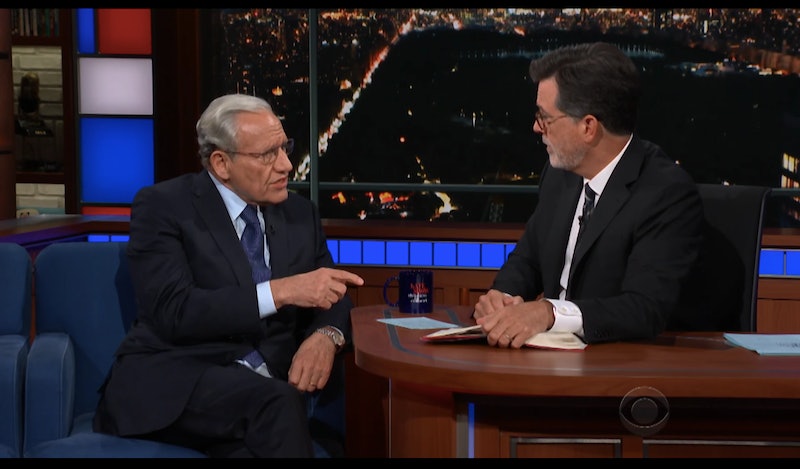 The Late Show with Stephen Colbert/CBS

On Monday night, The Late Show invited the author of Fear: Trump in the White House to sit down for an interview and expound on his tell-all book about the Trump administration. During this interview, journalist Bob Woodward told Stephen Colbert that his Trump book is entirely accurate, pushing back against the president's claim that Fear is a "work of fiction." As ABC News reported, Trump made his comments about Woodward's book during a media appearance on Sept. 5.

As the outlet noted, Trump further shared his thoughts about Fear during that event, adding, "If you look back at Woodward’s past, he had the same problem with other presidents. He likes to get publicity. He sells some books." The White House also came out strongly against the claims made in Woodward's book, with Press Secretary Sarah Huckabee Sanders saying in a statement on Sept. 4 (as reported by CNBC):

This book is nothing more than fabricated stories, many by former disgruntled employees, told to make the President look bad. While it is not always pretty, and rare that the press actually covers it, President Trump has broken through the bureaucratic process to deliver unprecedented successes for the American people.

During his interview with the Washington Post journalist, Colbert asked Woodward what he thought about the president's accusation that he is lying in his book. In response, Woodward assertively pushed back against Trump's claim, emphasizing the power of truth.

As Woodward put it:

I'm not [lying] ... [Trump] has his First Amendment rights and he can say anything, but the great editor at the Washington Post, Ben Bradlee, during Watergate used to always say when there was a contest back and forth that "the truth emerges" and the truth will emerge on this, too.

Woodward's book, which is set to be released on Sept. 11, has received widespread attention because of some of the shocking claims it makes about the inner workings of the Trump administration. Among other things, Fear claims that officials in the Trump administration took papers from the president's desk and hid them so he wouldn't sign potentially damaging policies into law. Again, Trump has characterized Woodward's book and its claims as fictitious.

In addition to responding to the president's characterization of Fear, Woodward also spent much of his interview with Colbert discussing his journalistic process. Colbert asked Woodward, who initially gained national recognition for his history-changing work on the Watergate scandal in 1972, why sources are willing to talk to him.

In response to Colbert's question, Woodward emphasized that he is both patient with and complimentary to his sources, who are then often willing to share information with him. Woodward also noted the importance of doing intensive research about a source's background before approaching them for an interview, saying that research shows people you are strongly interested in their perspective.

Overall, Woodward's interview with Colbert offered a glimpse into the author's experience writing Fear and also revealed his firm pushback against Trump's claim that his book is fiction. It remains to be seen whether the president will comment further on the book following its public release on Sept. 11. If he does, you can bet that Woodward will not shy away from responding to Trump's assertions.