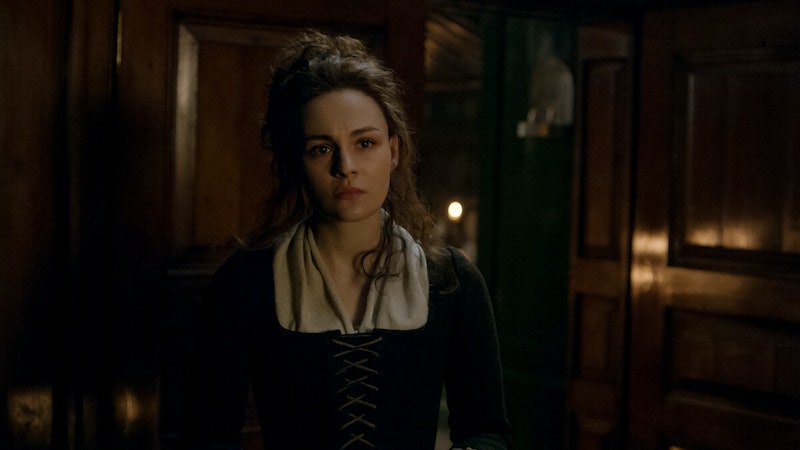 Spoilers for Outlander Season 4 Episode 9 ahead. Though Outlander is set in the 18th century (and sometimes the 20th) the series is no stranger to tackling modern social issues. From indigenous rights to sexual assault, from queerness to domestic violence, Outlander does not shy away from using its unusual plot structure to examine the past through modern eyes — those of Claire and, most recently, her daughter Brianna. This season, actor Sophie Skelton says Outlander will take on abortion, and the conversation will remind viewers of the very real and painful connection between sexual trauma and many women's decision to terminate a pregnancy.

The chain of events begins with Brianna's violent rape at the hands of the malicious pirate Stephen Bonnet. He attacks her in a crowded pub after Brianna notices that Bonnet is in possession of her mother's wedding ring, and attempts buy it off of him. Though the act itself is not shown onscreen, viewers are left with no doubt that the event will change the course of Brianna's life forever.

This week's episode begins with Outlander's attempts to handle Brianna's painful recovery process and battles with post-traumatic stress disorder with sensitivity and a raw honesty. That includes, according to Skelton, Brianna's disgust with herself, and the body she inhabits. "The way I sort of prepped for playing Bri’s PTSD... I talked to this woman who talked about just wanting to rip her own skin off her body," Skelton tells Bustle. "So I always played that with Bree anyway, that feeling of just being uncomfortable in your own skin and just wanting to escape yourself."

This feeling is only exacerbated by Brianna's realization that she is pregnant, and she's unsure whether her child is a product of her intimate, loving coupling with Roger, or the violation by Bonnet. "There is that feeling too of just almost feeling like this foreign thing is inside of you, you know, it’s not a beautiful moment where you find out a child you’ve been hoping for is inside of you," Skelton says of Brianna's reaction to her pregnancy. "It’s actually this moment where you feel like there’s something in me that you don’t want there and doesn’t belong to her, and almost makes her feel sick all the time and a little bit foreign from herself in a way."

It's the idea that Bonnet may have left her with a permanent reminder of his assault on her body that leads Claire to broach the subject of abortion with Bree in a future episode, a conversation that Skelton believes will spark "an interesting sort of debate." And the question of abortion in Brianna's case — as it is for so many women — is one of both physical and emotional trauma.

"Anyone being a single mother is petrifying, never mind in the 18th century, where you didn’t have pain killers, a lot of women died from childbirth," Skelton says of what might lead Brianna to consider abortion as an option. "Obviously her mother’s a surgeon which is great, but it’s a really lonely feeling for Bree and it’s a really scary feeling."

Though Brianna and Claire's conversation takes place in the 18th century, the subject could not be more timely. A recent Ohio bill, signed into law by Governor John Kasich, bans most abortions beyond the 12-week mark and makes no exception for cases of rape or incest, per The Cincinnati Enquirer. With the confirmation of Brett Kavanaugh to the Supreme Court, many worry about the fate of Roe v. Wade, and experts and pundits alike warn of states becoming emboldened to limit, if not outright ban, access to abortion as a result of the new balance on the courts.

Skelton herself makes no explicit reference to whether the writers had these modern debates in mind when they decided to include the abortion conversation in the show (Claire does speak to Brianna about abortion in the original book series, but Outlander has not hesitated to modify portions of the books they've found problematic or too controversial in the past). But she does assert that the writers had conversations surrounding sexual assault, #MeToo, and mental health in mind when they were deciding how to handle Brianna's rape and her road to recovery.

"I think one thing Outlander has always done well too is make sure that you, you don’t just see rape and then it’s gone," she says. "You really follow the character through."

For fans of Outlander, that means watching the worst moments of Bree's life unfold onscreen, including an emotional reminder of why many women choose to terminate their pregnancies in order to protect themselves, both mentally and physically.