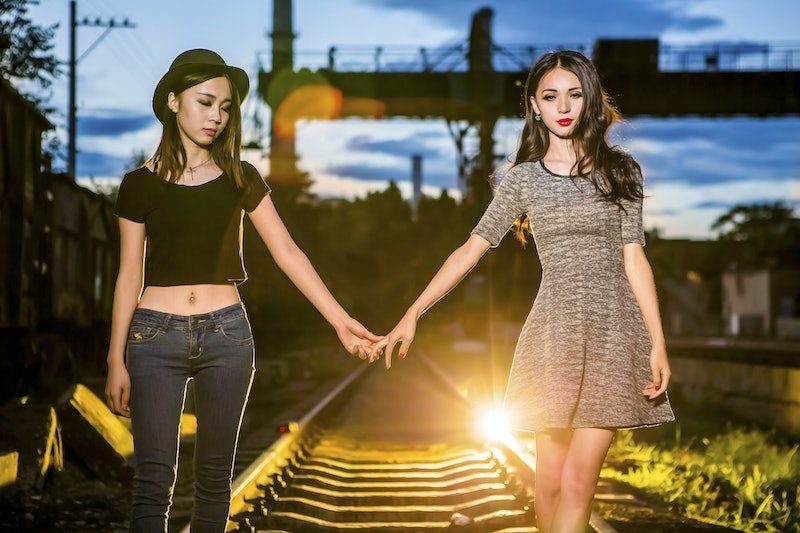 I've always been curious about open relationships, but I hate the thought of someone I'm dating hooking up with someone else. That made me wonder: Can a relationship be open for only one person? Or is it unfair to hold each other to different standards?

Good Vibrations staff sexologist Carol Queen, PhD tells Bustle that arrangements do exist where one person can hook up with other people and the other can't. Often, there's a unique situation that makes this the best option. Sometimes, for example, one partner is asexual, so the other needs to go elsewhere to get as much sex as they want. Or maybe one person is into a particular kink that their partner doesn't participate in. Or sometimes, one person is attracted to more than one gender and wants to explore relationships with people of a different gender than their partner.

Differences in what Queen calls "jealousy tolerance" can also factor into the decision to have a half-open relationship. If one person would go nuts thinking about their partner with someone else and the other's totally chill with it, that might be another reason to open a relationship halfway.

"To do this in a fully consensual way, the monogamous one doesn’t feel pushed into it — including, 'They’ll leave me if I say no.'"

But both partners have to be totally OK with this arrangement to make it work, says Queen. "To do this in a fully consensual way, the monogamous one doesn’t feel pushed into it — including, 'They’ll leave me if I say no.'" Plus, the person who's allowed to be with other people has to provide reassurance and excellent communication, and the person who's not has to have a full life that doesn't leave them dependent on their partner. It also helps if the person who's monogamous experiences compersion — happiness resulting from their partner's happiness.

If you're interested in hooking up with other people but don't want your partner to, bringing up this kind of arrangement may be scary, but it's a more honest way to get what you want than cheating. Queen recommends talking to your partner about it unless you know it'll stress them out and they won't be on board. But if stating your desire to be with other people would really cause such a rift in your relationship, Queen recommends addressing the underlying jealousy causing those feelings, potentially with a therapist. Just make sure you find a poly-friendly one.

In short, any relationship model is totally fine if both partners fully consent to it. But like consent to sex, consent to a relationship must be enthusiastic. It can't be given begrudgingly because one partner feels pressured. If you want a one-sided open relationship and your partner's not comfortable with it, you're best off either compromising on that front or ending the relationship altogether.

More like this
The Differences Between Kinks & Fetishes, Explained
By Lexi Inks
Are Quality Time & Gift-Receiving Love Languages Compatible?
By Lexi Inks
It's A Pleasure #53: Help! My Boyfriend Won't Tell Me Why He Stopped Going Down On Me
By Sophia Benoit
6 Dating App Tips To Try If You're Looking For A Serious Relationship
By Lexi Inks
Get Even More From Bustle — Sign Up For The Newsletter