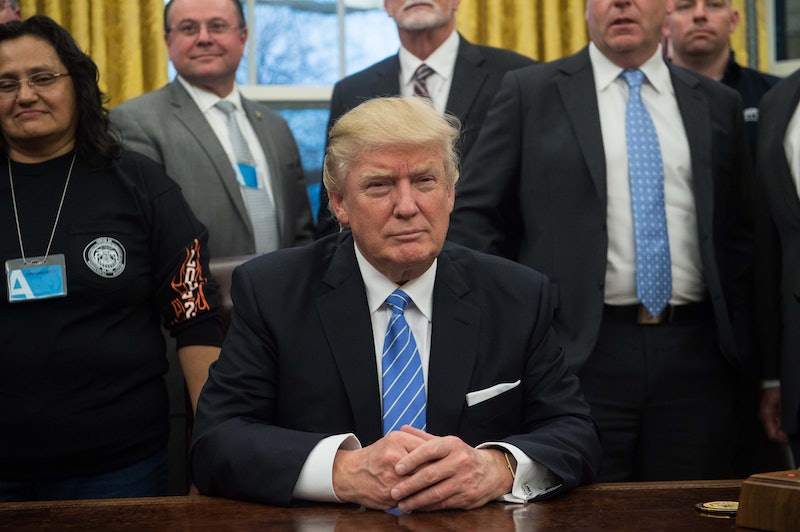 President Donald Trump has only been in office since Jan. 20, and he's already reinstated a ban on international non-governmental organizations that perform (or even promote) abortions receiving money from the U.S. government. But, in his apparent anti-choice crusade, can Trump eliminate Roe v. Wade, the landmark Supreme Court case that gave women the federal right to legal abortions?

Well, Roe v. Wade has stood for 44 years now, despite attempts by lawmakers to lessen its impacts, so overturning it would likely be quite difficult. Trump did say during an appearance on CBS' 60 Minutes that he was "pro-life" and that any Supreme Court judges he appoints "will be pro-life." But this discounts the fact that even after appointing a Supreme Court justice to fill Antonin Scalia's empty seat, it's believed that Trump will still need to appoint at least another Supreme Court judge with an anti-abortion stance to have a conservative majority. Following that, it will still take time to get a case to overturn Roe in front of the court.

Even if Trump manages to meet all of these conditions, it will still be hard to get rid of Roe. The Supreme Court generally avoids going against its past decisions unless there is an extremely valid reason for doing so. Additionally, Roe has impacted and continues to impact millions of people, which would mean the court would be more likely to sanction gradual change, like letting states restrict abortion more than before without actually getting rid of the federal right, according to USA Today. "You could shut down most abortion clinics without overturning Roe," Neal Devins, a law professor at William & Mary Law School, told USA Today.

If Roe v. Wade were to be repealed, potential restrictions on abortion would be decided individually by each state. States including Louisiana, Mississippi, North Dakota, and South Dakota are ready to implement abortion bans if Roe is overturned, Nancy Northup, president of the Center for Reproductive Rights, told USA Today. Overall, 21 states would probably ban abortion, 20 would likely keep abortion legal, and nine would be "battlegrounds," according to the Center for Reproductive Rights. Even though Trump repealing Roe anytime soon seems unlikely, it's still possible for state abortion restrictions to be upheld, thus restricting reproductive rights. Proponents of abortion rights are likely hoping that pro-Roe justices keep serving on the Supreme Court until Trump is out of office.