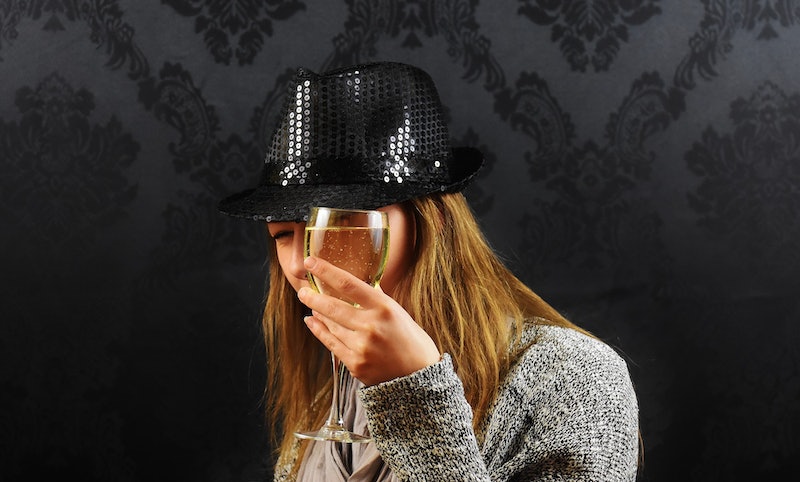 Once, at a wedding in Napa, CA while on a private wine tour, I offered one of the elderly guests some water. "Honey," she said, "I'm French. We don't drink water, but you can get me some more wine." Now, in an interview with a local news station in Maine, a 100-year-old woman says wine is the secret to longevity. And, some scientific studies agree that wine could be the key to a long healthy life. “I like my wine," Maine resident Florence Bearse told WCSH6 News during her 100th birthday party, as she sipped red wine from a new glass she received as a gift. "Don't take it away from me."

In my family, if someone lives to be in their 80s, the rule is: let them drink what they want. For one of my grandmothers, that was whiskey. My grandfather, on the other hand, likes Canadian beer: He likes it so much that for years he would travel to Canada for fishing trips and bring several cases back with him.

I love wine, so I'm thrilled to see Bearse enjoying her 100th birthday like the grown-ass woman she is, sipping her drink of choice instead of some canned protein drink.

But, Is Wine Really Good For You?

Bearse isn't alone in touting wine as the key to a long and happy life. Glenville, N.Y., resident Ann Froelich Riccio, also said that wine has played a part in her reaching her 100th birthday.

"Good health, I guess," she told The Daily Gazette when asked what her secret is. "And, I've also had a glass of wine every day at four, since I was at least 18."

While two women living to be 100 doesn't exactly add up to science, Dr. Colin Champ, the author of the book Misguided Medicine, who is also known as the Caveman Doctor, agrees that red wine has myriad health benefits. One thing that red wine does, according to Champ, is offset free radicals in your stomach.

"Data revealed that when polyphenols from wine are consumed during a meal, they buffer the oxidation from stomach acid and act as antioxidants to offset the formation of free radicals within our food," Dr. Champ explained on his blog. "If we cannot always avoid the consumption of oxidizing foods, and we definitely need our stomach acid, perhaps wine provides us with a tactic to avoid this damage."

Champ also noted that ancient Greek physician Hippocrates (the Hippocratic oath that all doctors take is named after him) recommended wine as a cure for all diseases more than 2,400 years ago.

"I made an oath to him prior to my medical training stating that I would follow medicine the Hippocratic way," Dr. Champ wrote. "He recommended wine for most ailments from treating pain to diarrhea. As most physicians are followers of the Hippocratic Oath, it only seems reasonable to follow Hippocrates’ lead."

Can you imagine going to the doctor and leaving with a prescription for wine? Wouldn't it be great if health insurance covered this?

Red Gets All The Love, But White Has Benefits, Too

Most studies have focused on the benefits of drinking red wine, but a 2014 Czech study presented at the European Society of Cardiology Congress in Barcelona found that white wine has health benefits as well, according to an article by Laura Donnelly in The Telegraph. The findings reported that having a glass of wine with dinner had health benefits for people who also exercise regularly.

In the study, participants who had one glass of wine a day up to five times a week, and also exercised, saw positive results in good cholesterol, and a drop in overall cholesterol, The Telegraph reported.

"Professor Taborsky, a cardiologist from Palacky University, in the Czech republic, said in the article: "Our current study shows that the combination of moderate wine drinking plus regular exercise improves markers of atherosclerosis, suggesting that this combination is protective against cardiovascular disease."

What's more, Russia is urging its citizens to drink more wine, and less vodka. "We are a country which generally drinks strong alcohol like vodka or moonshine. This not only robs people of their health but also of their lives" the head of the Russian agriculture ministry, Alexander Tkachyov, told Russian television channel NTV, The Moscow Times reported. "By drinking more wine, Russians could see the country’s health and demographic problems change for the better."

Let's Dig Deeper, Shall We?

If you can believe it, there was a time when cigarettes were endorsed by doctors. While we know that smoking can cause lung cancer, and the link was established as early as the late 19th century, it wasn't until the mid-20th century that the real dangers of smoking were revealed to the public with the 1964 Surgeon General's report, according to a paper by Dr Robert N. Proctor of Stanford University.

As of yet, there has not been a comprehensive, cohesive study to determine whether alcohol actually has health benefits. And, with so many claims that wine (and alcohol in general) is beneficial to your health, the National Institutes of Health is beginning a $100 million clinical trial to test for whether a drink a day really does prevent heart attacks, according to an article by Roni Caryn Rabin published in the New York Times.

And, even if the study reveals that there are no benefits to drinking wine, wine has been around forever. I mean, if it was good enough for Hippocrates ... I'll toast to that. Cheers!