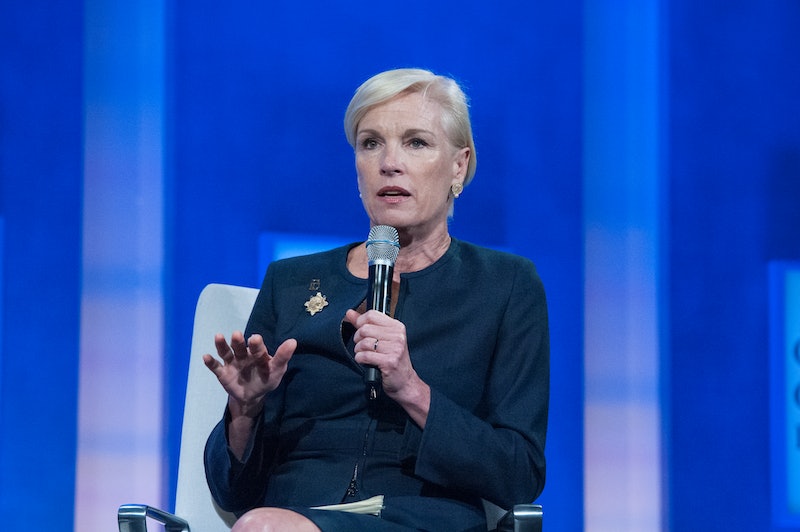 On Saturday, the Women's March on Washington and sister marches nationwide were estimated to be the largest protests in the United States ever. And on Monday, President Trump signed an executive order that shows how little he cares about women and equal rights — not just in this country but around the world. It's called the "global gag rule" and has been around off and on since the days of Ronald Reagan, but it's about abortion. Confused? You're not the only one. To fully understand the anti-abortion gag order, have Planned Parenthood's Cecile Richards explain it. You must check out this video.

The United States is the largest global donor to women's health initiatives in developing countries around the world, as Richards says in the video. But there have been strings attached in the past, something that Trump just reinstated. "A policy called the 'global gag rule' has cast a shadow on that support," Richards explains. "Current U.S. policy already restricts organizations from using U.S. funds for abortion, but the gag rule goes even further by dictating what they can do with their own money." The consequences are substantial:

This means if a clinic receives even $1 of U.S. assistance for family planning, its doctors and nurses are limited in what they can do to help their patients. They can't counsel women on a full range of health options legally available to her, refer her to another provider for specialized care, or even give her a pamphlet with medically accurate information. That's why we call it the "global gag rule," because it prevents doctors from talking to their patients and providing services that are legal in their own countries, and in the U.S.

Richards further argues that this results in clinics shutting down, more unplanned pregnancies, and "more unsafe abortions." The rule — also known as the Mexico City policy — also keeps health workers in other countries from testifying about the dangers of illegal abortion, if they want to keep the U.S. aid coming. This all together could kill thousands of women each year. Unsafe abortions kill nearly 70,000 women a year worldwide.

The rule was first put into place by President Reagan in the 1980s, kept in place by George H.W. Bush, rescinded by Bill Clinton, and then reenacted by George W. Bush. President Obama ended it once again when he came into office. Now the only way to overrule Trump would be to pass legislation; in 2015 there was bipartisan support in the Senate for a bill that would make it impossible to reenact the gag rule by executive order. It didn't pass the House.

That push was led by New Hampshire Sen. Jeanne Shaheen. She released a statement Monday on Trump's move, and said she would once again call for a bipartisan effort to repeal the global gag rule forever. "The Trump Administration and Republican leadership have made no secret of their dangerous obsession with rolling back reproductive rights,” Shaheen said in the statement. “President Trump's reinstatement of the Global Gag Rule ignores decades of research, instead favoring ideological politics over women and families."

This was one of the first actions Trump took following the Women's March, which only goes to show how important the protest was, and how important future protests will be.