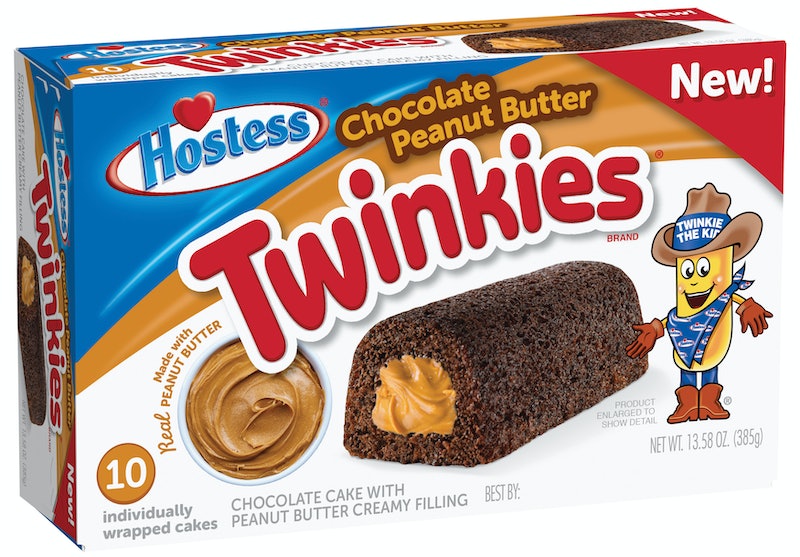 So, I have a confession to make. I have never eaten an entire Twinkie. Blasphemous, I know. But, now, Chocolate Peanut Butter Twinkies are here — and truth be told — they actually sound kind of amazing. My mom didn't buy us Twinkies when I was a kid, and later I worked near a Hostess bakery that made Twinkies.

While the smell blowing downwind into my office window every day didn't tempt me, I kind of think of Twinkies as apocalypse food because they can last forever. Seriously, this Twinkie in Maine is perfectly preserved after 40 years.

I always knew I would try them someday, and my friendlies, that day is today. I'm even going to add some of these new Chocolate Peanut Butter Twinkies to my earthquake kit, because hello — chocolate and peanut butter! It's basically a Reese's Peanut Butter Cup wrapped in cake, and what could be better than that?

"With Chocolate Peanut Butter Twinkies, we have paired America’s favorite flavor combination with America’s most beloved snack cake,” Hostess Brands Senior Vice President and Chief Marketing Officer Burke Raine said in a press release. "This peanut butter-filled treat comes on the heels of our recent introduction of Hostess Chocolate Cake Twinkies, and is another a prime example of our efforts to embrace consumer flavor trends.”

These sweet treats, already spotted on store shelves, are a perfect pairing of sweet and salty flavors finished with an irresistible creamy peanut butter texture. Available in in single-serve and multi-pack formats, grab some of these for your holiday weekend festivities.

According to The Kitchen Project on Food History, Baker James A. Dewar conceived of the Twinkie after he delivered a cream filled strawberry shortcake to a customer. He noticed that the shortcake machines sat idle when the strawberry season was over so Dewar came up with an idea to use them to make a snack cake filled with a banana filling, and only charge a nickel for a package of two. Since money was tight for people during the Great Depression, this low-cost snack cake caught on pretty quickly.

During WWII, when bananas were rationed, Hostess replaced the forbidden fruit with a vanilla cream filling, which proved so popular it became the Twinkie that you know and love today.

"During the 60s, when there were huge fears of a nuclear attack, many bomb shelters were built," Food History noted. "Twinkies were one of the most popular items to have because it was said that they stay fresh forever."

Mental Floss noted that Twinkies are so iconic that former President Bill Clinton even put one in a time capsule, though it was later removed for fear of attracting vermin, but that's not going to stop me from adding them to my disaster kit.

If you're a fan of Twinkies, or a chocolate and peanut butter lover (I mean who isn't?), this is one delicious dessert you don't want to miss.