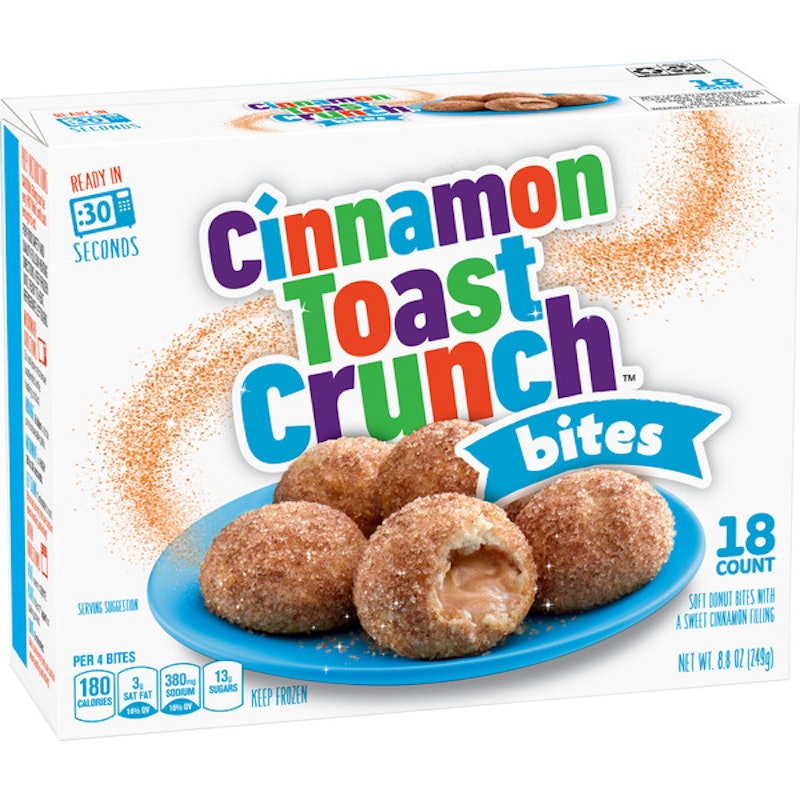 While it's easily been 10 years since I've eaten Cinnamon Toast Crunch cereal, I can still sing you the jingle. Cinnamon Toast Crunch instantly brings me back to Saturday morning cartoons. Similarly, these Cinnamon Toast Crunch Bites will transport you back to your epic '90s childhood, which for me meant eating cereal from a plastic bowl so the clanging of the spoon against glass didn't wake the 'rents, who liked to sleep past 7 a.m. on the weekends.

Ah, I already feel like I'm back in 1992 chilling at my friend Stacy's backyard pool with microwaveable summer snacks while her parents were at work and our lazy summer days were spent lounging on inflatable rafts. Apparently, I'm not the only one. Twitter is lighting up with Cinnamon Toast Crunch Bites fan adoration.

This childhood throwback is part of General Mills new foods that will add more fun to your summer activities such as picnics in the park, days spent at the beach or pool, and backyard barbecues with family, and friends.

Personally, I continued being a fan of cinnamon toast long after I put down my Cinnamon Toast Crunch spoon (um, why did I do this?). There is just something about sugary cinnamon that conjures up the feeling of home, old-timey holidays where everyone eats lots of apple pie, and long weekend mornings vegging out in front of the television in superhero pajamas.

Things were different back in the '90s. Can you imagine an ad for kids' breakfast these days that leads with "sugar" as part of the sales pitch? And, obviously my mom always served my Cinnamon Toast Crunch on a tray with a pitcher of milk, a glass of orange juice, and two slices of toast with a pat of butter just like hotel room service.

All moms did that, right? Wait, no they didn't. My mom was still sleeping as I poured my Cinnamon Toast Crunch into my plastic bowl and prepared for a morning watching the Smurfs.

All kidding aside, these Cinnamon Toast Crunch Bites look pretty boss, and will definitely be my contribution to the next potluck I'm invited to.