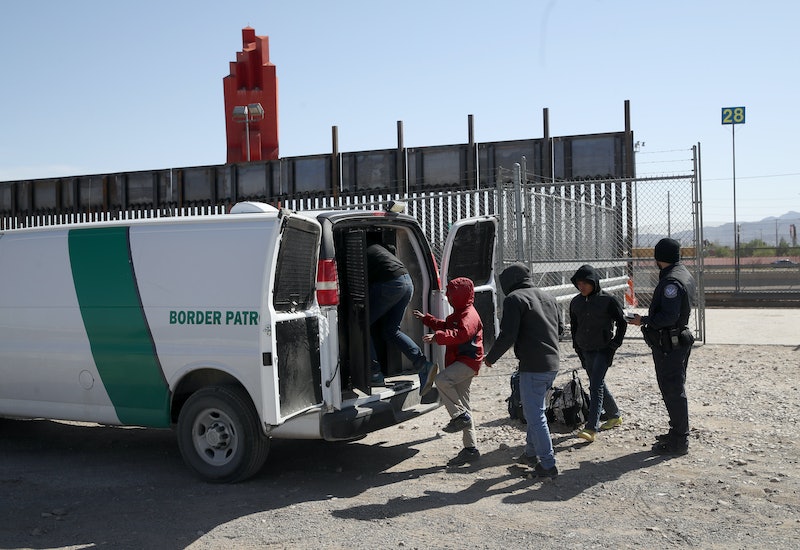 The departure of Homeland Security Secretary Kirstjen Nielsen hasn't changed the trajectory of immigration policy from the Trump administration, at least not for vulnerable migrants. There's now a plan for Border Patrol agents to take a larger role in the asylum process — something that not only migrant advocates but LGBTQ experts take issue with, too, ThinkProgress reported. The newest immigration policy change will make claiming asylum harder for LGBTQ people.

Brandon Judd, president of the National Border Patrol Council, told C-SPAN that some Border Patrol agents will begin giving "credible fear" interviews this week. That's what happens after an asylum seeker says they're afraid to return to their country.

Typically, an asylum officer would ask the asylum seeker questions to better understand what persecution they fear. If their fear is deemed "credible," the asylum seeker can proceed in the process and present their case to a judge — which can take years. About 90 percent pass this test. The rest are deported unless they challenge the decision.

Up until now, that interview has been the domain of asylum officers who work for Citizenship and Immigration Services (USCIS) whereas Border Patrol agents work for Customs and Border Protection (CBP). Both fall under the Department of Homeland Security, but advocates say there is a difference — and it's even bigger for LGBTQ people in particular because Border Patrol agents haven't had sensitivity training, ThinkProgress reported.

Immigration Intervention Project Director at Sanctuary for Families Lori Adams told ThinkProgress that Border Patrol is like the police officer in the system, and that's not appropriate for interviews like this.

"LGBTQ asylum cases are some of the most complicated at the credible fear stage," Adams told ThinkProgress. "Fleeing from places where it wasn’t safe to admit who they were. To approach the U.S. border and one of the first things you need to say is ‘I’m gay’ when maybe you’ve never said it yourself out loud before… you’re certainly not going to want to say that to someone holding a weapon."

The training is key, Aaron Morris, Executive Director at Immigration Equality, an advocacy group for LGBTQ migrants, told ThinkProgress. He said that the two weeks that Border Patrol agents would have had to get up to speed since the change was announced is not sufficient. "They do not have any training," Morris told ThinkProgress.

And then he pointed to having one agency oversee so much of the asylum process. "It’s pretty disconcerting and I appreciate that the administration might think it’s quicker, but we have a duty to uphold the fundamental human rights we believe in, and asking a law enforcement officer to do the job of a judge is wrong," Morris said.

USCIS, on the other hand as ThinkProgress reports, has undergone LGBTQ sensitivity training. Asylum officers should be trained in the correct terminology and best practices to ensure that the asylum seekers' feel comfortable. They also are trained on the kind of persecution that LGBTQ people face in certain countries.

The literature for the training course USCIS has developed is available online, and it includes the importance of creating a non-judgmental environment for the interview. "LGBTI applicants may hesitate to talk about past experiences and may be afraid they will be harmed again because of their actual or perceived sexual orientation or gender identity," the training reads. "For many, it will be very difficult to talk about something as private as sexual orientation, gender identity, or HIV-positive status."

As the advocates and experts told ThinkProgress, that environment is vital for a successful interview.