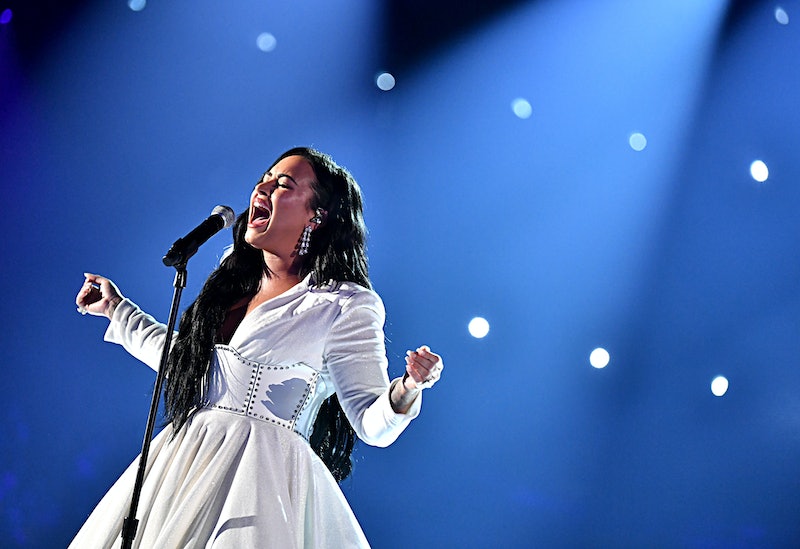 Two years before Demi Lovato performed the haunting ballad "Anyone" at the 2020 Grammys, no one — neither the five other songwriters credited on the track nor Lovato herself — could imagine that it would become the soundtrack to her emotional return to the stage following her 2018 overdose. But the writing process that led to "Anyone" was just as unpredictable as the song's twisty path up the Billboard charts.

"I think it was around 12 or 1 a.m., and then someone started on the piano and we all got dragged back into the room," Eyelar, who is a singer as well as a songwriter, recalls of the fateful night in London when "Anyone" was born. "From then [it felt like] literally something took over, it just happened. We didn't sit down to write word for word, it just came together."

Eyelar tells Bustle that she, Lovato, and fellow songwriters Bibi Bourelly, Jay Moon, Dayyon Alexander, and RØMANS wrote the song so fast, it was less of a writing session and more of "a flow of words and melodies." The message of "Anyone" was one they all related to. "It was super honest and really raw, and no one really held back," she says, adding later that "it was all of us sharing an emotion."

And then, everything stopped.

A short time after, Lovato was rushed to the hospital after a reported overdose in July of 2018. Given the news, Eyelar was sure that "Anyone" would never see the light of day. But now that it has, the songwriter says Lovato's overdose gave the song a new meaning, one that Eyelar feels fans need to hear. "I think it is meant to be. Her singing the song and having this impact after what happened can help so many other people who are struggling with depression and who feel alone," she says.

Yet despite the song's popularity, some passionate Lovato fans have been critical of Eyelar. A few have tweeted at her, asking why she didn't help the singer when they were writing the song. "I understand because they're super protective of her, and it's really sad and really scary what happened," she says. "If any of us knew that she was in trouble then, of course, we would have done something, but I don't even have [her] number."

But most of the feedback Eyelar gets from Lovatics is positive, and seeing the impact the song has on listeners has inspired her in her own career. "I think it's so cool that you just go out there and you sing your truth in front of so many people," she says. "That is something I would take to my own projects and my own music. I would never want to sing or write anything that's not personal or real to me."