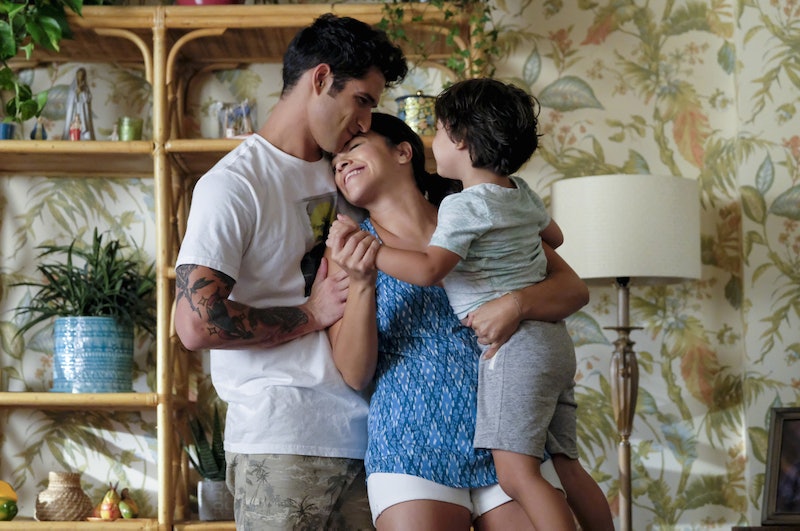 If you were rooting for Adam and Jane's relationship on Jane The Virgin to make it for the long haul, it might be time to jump ship and root for Rafael. Adam — Jane’s first love — came back into her life at the end of Season 3, but not too much was known about their backstory. As the new season kicked off fans learned that Adam’s a bit reckless and immature, but an amazing artist who’s absolutely crazy about Jane. Although an always-anxious Jane constantly checked in with Adam about his comfort level with her life and the pace of their relationship. At first Adam was all good, but his calm nature quickly turns cold in Oct. 27’s episode of Jane the Virgin as soon as Jane's son came into the picture. And his reaction is a dating single mom's worst nightmare.

Jane had been going back and forth about when the perfect time was to introduce her son Mateo to Adam. And it doesn't help that neither Alba, nor Rafael is too thrilled about Jane's new relationship. But they are the least of Jane's worries at the beginning of the episode as Mateo unexpectedly comes home right as she and Adam are making out on the couch. In a super cute, naive moment, Mateo runs over to his mom and punches Adam in the eye convinced that he was hurting his mommy. Talk about an introduction.

Now that Mateo had unofficially met Adam and not at all like she originally planned, Jane has to do some quick damage control. She expresses her wish to introduce all the men in her life to Rafael, who's "I don't like the guy" comments are overheard by Mateo. In an effort to get things back on track after his slip of the lips, Raphael agrees to go to lunch with Jane and Adam. And boy does he grill Adam! But Jane's boyfriend expertly holds his own as Raphael asks trick question after trick question. And he constantly reassures Jane that her baby daddy and child aren't too much for him to handle. This is why it's so surprising when Adam says he's beginning to "panic" at the end of the episode.

All the praise goes to Jane for balancing work, a child, co-parenting, and new boyfriend all while walking around on crutches. And nothing but a boatload of negative energy to Adam, who does exactly what single moms fear: as soon as mom's think a partner's all in and begins to bring their child around, the partner pulls back.

While Adam is young and Jane's life can be a bit of a circus at times, fans also know that Jane had given him multiple chances to escape long before Mateo came into the picture. In fact, Adam's insistence on not being a secret is what makes Jane suggest that all the men in her life attend a baseball game together and bond. Mateo is super bored, but Adam makes the experience fun by convincing Mateo that he's a superhero who can freeze time just by closing his eyes. The sweet exchange lifts Mateo's spirt and even garners a smile from Rafael, who's clearly impressed. Later on, Rafael and Jane need a babysitter and Adam graciously steps up, which is apparently where things go downhill for the couple.

I guess Adam didn't know how serious it was to date a single mom until he gets the "don't hurt my mom, or else" talk from Mateo. In Mateo's defense though, it was a sweeter talk than most kids give their future-stepparents. Mateo speaks in a calm voice and doesn't use any threatening words. The whole exchange happens on a porch swing for crying out loud.

Mateo just doesn't want to see his mother cry anymore like she did when Michael died. And Adam just looks into that sweet face of Mateo's and nods like he understands. Although, Adam doesn't exactly promise the toddler he won't hurt Jane, which should've been a sign that things were about to get murky.

Jane The Virgin has been great about portraying the reality for modern-day single moms — everything from work/life balance to dating. So of course the show didn't shy away from this sticky situation either either. For many moms, it's true that every potential mate isn't OK with coming second to their child, at the beginning of relationship and in some cases forever.

But, what does this mean for Jane and Adam's relationship on the show? Is this the end? Fans would hate to see Jane have to go back on the dating market, but she — just like every other single mom out there — deserves to be with someone who's 100 percent in. And maybe that someone's just not Adam.