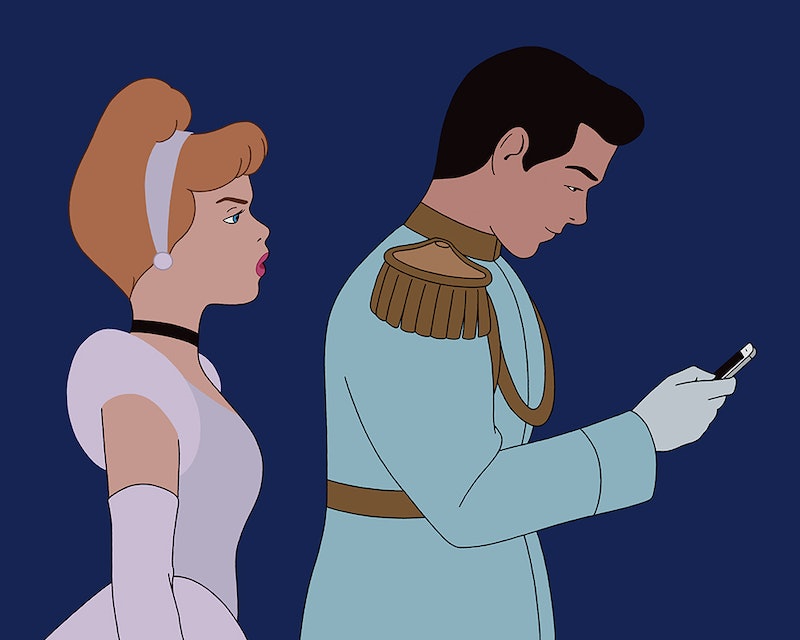 It’s been a while since we’ve seen a new “Disney characters reimagined as…” art project — but we’re far from done with them. In UK-based artist Tom Ward’s illustration series Alt Disney, we see what our favorite Disney characters might be up to in 2017. And you guys? It's dark. Really dark. Like, Tinkerbell’s-dead-because-you-didn’t-clap-hard-enough dark. Heck, even the illustrations that don't seem dark have a pretty dark edge to them when you look a little closer.

It’s honestly kind of fascinating to me that we keep coming back to this particular lens, that we keep using the Disney characters that were popular during our childhoods as a way to examine the issues we’re dealing with as adults today. Something about this method of reflection clearly resonates with us, and I think the draw is more than just nostalgia.

A number of themes run through Ward’s re-envisioning, from how the ubiquitous nature of technology affects how we engage (or don’t engage) with the world to pressing environmental issues. The way I read them, though, what most — if not all — of these themes have in common is perhaps the scariest thing of all: They’re largely problems of our own creation. We make the conscious choice to ignore the people in front of us because we’re too busy with our phones, as Prince Charming does:

Or to allow some of the biggest moments in our lives to pass us by, as Arthur does:

We make the conscious choice to hunt, imprison, and mistreat animals, ultimately to our own detriment, as the illustrations of Robin Hood, Baloo, Tigger, Simba, and Shere Khan show:

We make the conscious choice to shut our proverbial and literal doors and windows to people in need, as seen in Peter Pan’s situation:

And we make the conscious choice to keep people in rigidly defined boxes based on gender roles, as the pictures of Alice, Aladdin, Jasmine, and Genie show:

(Alice clearly does not want to be a Woman Laughing Alone With Salad.)

And all of that is both striking and horrifying to me.

But hey, at least we’ve also got LeFou. On the surface, at least, he seems to be the exception. In the live-action Beauty and the Beast released earlier this year, LeFou became the first openly gay Disney character seen onscreen, and in Ward’s illustrations, he’s celebrating Pride with Gaston:

Even this, though, is somewhat troubling. Though much discussed prior to the film’s release, the “exclusively gay moment” and its context ultimately received mixed reactions. Slate’s David Canfield summed up the ambivalence nicely, writing, “Given the very standard, slightly patronizing gay reading of LeFou (so many longing glances!), it was nice to see the movie expand its queer boundaries a little there.” But for others, the reading of LeFou wasn’t even ambivalent — it was a problem. As Damian Alexander wrote at Polygon, it was “a poor tribute” to original Beauty and the Beast lyricist Howard Ashman.

And of course, as Bustle’s Martha Sorrenson observed when the live-action Beauty and the Beast was first released, “It’s disappointing to think that Beauty and the Beast will be applauded for its representation when the majority of the movie still showed a gay character being manipulated by the (straight) person he loved.”

Now, it did briefly occur to me that Pinocchio and Geppetto might be an exception too. The two of them do look relatively happy in their illustration; they’re not actively ignoring each other in favor of their phones the way, say, Prince Charming is. And hey, it looks like they’ve even found a silver lining in the fact that Pinocchio still isn’t a real boy — his nose makes quite an effective selfie stick:

But when I thought about it a little more, I’m actually not sure that what we’re seeing here is “happily ever after” material. Remember what causes Pinocchio’s nose to grow? Lying. His nose grows when he lies about something. And given that the kinds of pictures we take with selfie sticks are usually intended to be posted on social media, this image looks to me not like the two of them are taking a happy family photo, but like they’re curating the best parts of their lives to be posted online for the consumption of others. I read the image as commentary on our social media-obsessed culture.

I don’t mean to imply that all technology is bad, or that we’re terrible people or anything like that. What I do think we can take away from this series, though, is that it behooves us to identify our own worst habits and qualities, and to make an active effort to do something about them. These habits and qualities strike us more when we’re looking at other people doing or displaying them, rather than ourselves. When we see characters to whom we have an emotional connection doing them, though, it’s easier for us to recognize the same habits and qualities in ourselves.

And we can’t just allow our reaction to that recognition be to get defensive. That doesn’t solve anything. We owe to each other to look inward — and we owe it to ourselves, too. We owe it to everyone, including ourselves, to be better. Because how else can we be the change we want to see in the world?