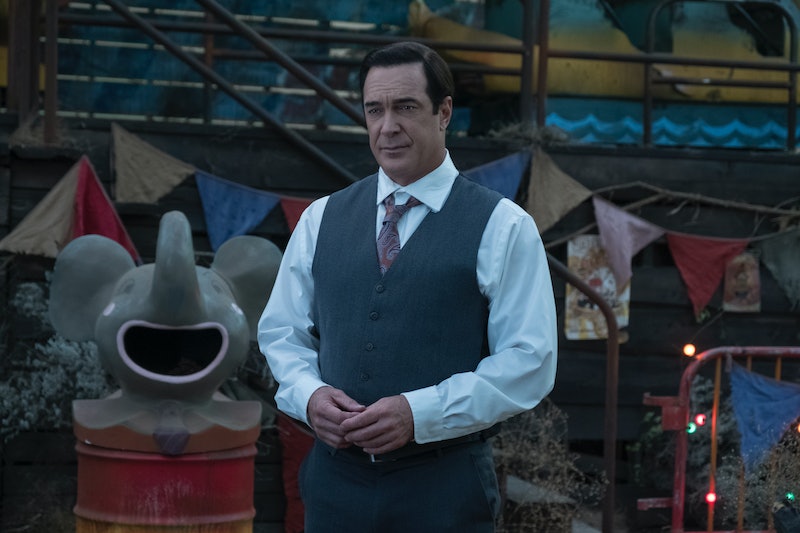 Spoilers for Season 2 and the book series ahead! As fans of Lemony Snicket's A Series of Unfortunate Events well know, there seems to be not end to the conspiracy plot at the center of the orphans' misfortune. And as of Season 2, some characters that will be important to the story of the Baudelaires have not yet even been introduced —or have there? Will Kit Snicket be in Season 3 of A Series of Unfortunate Events? She may have already made her first appearance.

For fans who may need a book refresher, Kit Snicket is the sister of Lemony Snicket, the narrator. She is an ally to the Baudelaire childen, and plays a prominent role in the final two books of the series: The Penultimate Peril and The End. However, she meets her own end in The End, giving birth to Beatrice (named after the Baudelaire's mother) before succumbing to the poison mushroom, Medusoid Mycelium. She is a rather mysterious figure though, as it is hinted that she has had relationships with both Count Olaf and Dewey Denouement. And she's certainly tied to the secret society, the V.F.D. So perhaps, the TV series will be able to shed a bit more light on her character and maybe even spare her life.

While there is no official confirmation that the character will even appear at all in the Netflix adaptation of the iconic book series, there are plenty of reasons to think she will show up. Producer and star of the series, Neil Patrick Harris said in an interview with TV Guide that staying faithful to the book series is something that is important to him. "We've intentionally been very truthful and factual and loyal to the books," he said. "We've added a few characters that aren't in the books, we've added some songs that you probably couldn't put into the books, but for the most part we're sticking to the structure of what already worked." So, since Kit plays an important role in the books, it would stand to reason that she’d play an important role in the TV series as well.

Major spoilers for the Season 2 finale.

At the end of Season 2, Allison Williams makes her A Series Of Unfortunate Events debut as, well, it's not yet clear — except that she is, as Lemony says, "the previous Madam Lulu." She's driving Jacques' taxi, and the narrator also says she's someone who "reliable sources tell me I know very well." Could this be the third Snicket sibling?

Variety reported in advance of the premiere that Williams will be appearing in both Seasons 2 and 3 of A Series of Unfortunate Events, but her character's identity was not revealed. An official tweet from the show though, seems to hint that Williams’ character will be a friend and ally to the Baudelaires. The tweet reads, “Three heads are better than one when facing the particularly perilous,” which of course implies some kind of teamwork between Williams’ character and the older orphans. As a big name star following her success in Get Out and Girls, it would make sense that Williams would take an important role in the series. Kit would make sense.

If Williams does wind up to be playing Kit Snicket, then it would mean the character was getting a bit of an earlier introduction than she does in the books. While Kit was referenced by her brother Lemony in The Carnivorous Carnival (Book 9 in the series), she wasn’t introduced to the children until later, in Book 11, The Grim Grotto. However, as Harris said to TV guide, he and other producers are not afraid to take a creative liberty or two as long as it stays faithful to the source material. According to The Express, Season 2 will adapt books 5-9 and Season 3 would then adapt the remaining 10-13.

So, while Kit may only be mentioned or perhaps a small role in Season 2 of the Netflix series, it is nearly certain she will be all over Season 3.

More like this
Netflix Shut Down 'Bridgerton' S3 Rumours About A “Very Dark” Storyline
By Bustle
Everything To Know About A Potential 'Lockwood & Co.' Season 2
By Gretchen Smail
All The ’70s Easter Eggs You Missed In 'That ’90s Show'
By Grace Wehniainen
'The Crown' Season 6 Has Suspended Filming "Out Of Respect" For The Queen's Death
By Bustle Staff
Get Even More From Bustle — Sign Up For The Newsletter
From hair trends to relationship advice, our daily newsletter has everything you need to sound like a person who’s on TikTok, even if you aren’t.