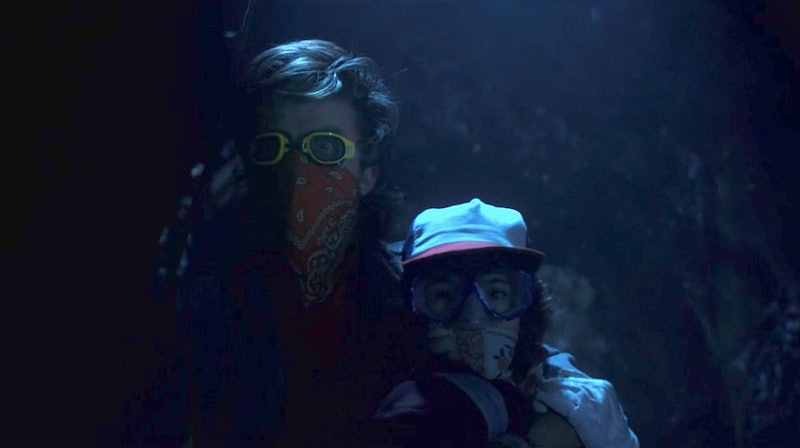 Stranger Things borrows the lessons from John Hughes movies like Pretty In Pink and The Breakfast Club more than you think — especially when it comes to characters like Steve Harrington. Just because someone is popular doesn't make them a bad person, as much as that might appease your bitter inner geek. The friendship between Steve and Dustin in Stranger Things 2 is one of the best parts of the new season, and not only because it just so freakin' cute. It also continues the arcs of two characters you thought you had pegged from the beginning.

Who among us didn't want to adopt the Stranger Things kids after Season 1? Steve Harrington actually gets to do it. And Dustin is his gateway friendship. Though the former king of Hawkins High and the middle schooler with the "pearls" have vastly different interests and fulfill distinctly different archetypes, they find themselves in a similar situation in Season 2. Not only are the girls they like interested in other boys, but they've also been abandoned by their friends. In theory, Steve is everything that Dustin wants to be: popular, charming, good-looking, and athletic. But they're both lonely. They're both hurting.

That's how the two end up setting monster traps together, and how Steve finds himself as an unexpected yet truly delightful babysitter/soccer dad of the group. Dustin has an hilarious relationship with his mother — who adores him — as we learn in Season 2, but he still benefits from having a mentor like Steve. If you want to get really into it, Stranger Things 2 does an amazing job with both Steve and Hopper at allowing male characters to be nurturing caregivers. Come to think of it, Bob the Brain's movie night choice of Mr. Mom is a textual metaphor for the rest of the season. Even though the series is set decades ago, it still subverts patriarchal norms.

Back to Dustin and Steve. What starts as a heartfelt conversation on the train tracks — really the only acceptable setting for heartfelt conversations in the '80s — becomes something a little more lasting. Steve is genuinely rooting for Dustin at the Snow Ball in the final minutes of the season, and it's ridiculously sweet to see him take this odd dork out. He tried to get Dustin to calm down and stop trying too hard. Steve's advice isn't always the best, but he's a teenager. Give the guy a break. We're all just figuring things out. At least he cares.

Steve also gets bullied by Billy in Season 2, and finds himself sliding towards the wrong end of the social ladder. By reaching out to Dustin, he's breaking that cycle a little bit. Suddenly the structures of high school popularity mean a lot less to Steve, and hopefully his advice will help Dustin take it with a grain of salt.

"It turns into this big-brother relationship," actor Joe Keery, who plays Steve, told Vulture in an interview, "even though they’re both a little stubborn and think they’re the boss and they’ve got it all figured out. Underneath, there’s this genuine care for each other."

Dustin and Steve are also just like, two lowkey fan-favorite characters, and it's fun to have them in scenes together. Sure, Barb and Eleven were the breakout memes and Halloween costumes following Stranger Things Season 1, but the true fans are the ones who fell hard for Steve Harrington and wanted to get into Lord of the Rings debates with Dustin. Finally, they're getting their due.

Plus, if it weren't for Dustin, we'd never know that Steve's hair care routine involves Farah Fawcett spray. That's gold and we should all be thankful for it. The friendship that blossoms between Steve and Dustin is too sweet to handle and just what we need right now. But it really shouldn't be surprising for fans of this genre and people who live in the real world. Labels are, as drunk Nancy would say, "total bullsh*t." Steve and Dustin are more than one-dimensional jock and nerd stereotypes, as their heartwarming bromance proves. Sincerely yours, the Stranger Things club.

More like this
Kate Bush Revealed The Real Meaning Behind 'Running Up That Hill' Lyrics
By Darshita Goyal
Netflix Reveals First Look At Wednesday In The 'Addams Family' Spinoff Series
By Bustle Editors
Nicola Coughlan Shared A Lady Whistledown Excerpt From ‘Bridgerton’ Season 3
By Grace Wehniainen, Alyssa Lapid and Sam Ramsden
Devi Is Going To Meet A “Smoldering Bad Boy” In ‘Never Have I Ever’ Season 4
By Jack Irvin and Gabrielle Bondi
Get Even More From Bustle — Sign Up For The Newsletter