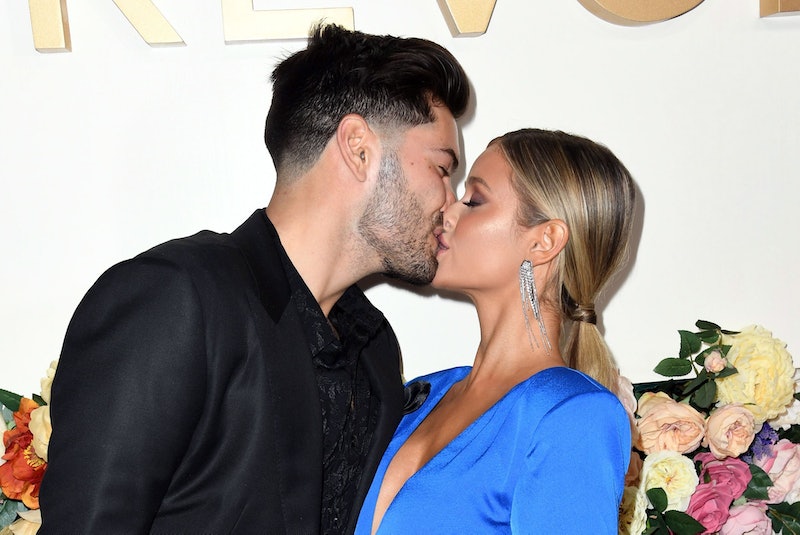 Peter Weber's season may be coming to a close, but that isn't the only Bachelor-centric event worth celebrating these days. Dylan Barbour and Hannah Godwin's engagement party took place over the weekend on Sunday, Feb. 23. The special night reunited so many of your favorite Bachelor Nation alums — including a few notable exes as well. In fact, the party was packed with so many familiar faces, you'd almost expect Chris Harrison to pop out from somewhere and start throwing around roses to everyone.

The Bachelor in Paradise duo, who got engaged back in September 2019 at the end of the sixth season of BiP, spent the evening celebrating their pending nuptials in a beautiful home in Beverly Hills while surrounded by close friends, many of whom had been there to witness their relationship right from the start. Notable guests included fellow Paradise alums Mike Johnson, Demi Burnett, and Katie Morton, who had also gotten engaged at the end of the season to Chris Bukowski, though the two of them have since split.

In addition to those alums, Hannah Brown also made an appearance, as did her ex-fiancé Jed Wyatt, who was accompanied by his new girlfriend Ellen Decker. But while that definitely has the makings of a very awkward situation, the party was so full of Bach contestants that it's possible the two of them didn't even run into each other at all.

For his part, Jed only seemed to have eyes for his new love interest, which he made of point of documenting on Instagram throughout the evening. "Margaritas and dancing are becoming a monthly habit and we’re okay with it," he captioned one photo of the two of them in front of a gorgeous view of Los Angeles.

Then, of course, Big Mike proved to be a true star of the night, showing off his dance moves and just being the best guy in general. (Remind us again why he wasn't the Bachelor?)

And last, but certainly not least, there was the happy couple who had a blast celebrating their love with the people they care about most.

Back in November, Hannah and Dylan shared with Us Weekly that they haven't really started diving into the wedding planning process yet and were just enjoying being together away from the cameras. “We talk loosely about it. It’s fun to talk about but we haven’t set anything,” Dylan told the outlet, while Hannah G. added, “It’s more just fun to talk about right now. We want to enjoy just being us.”

However, now that an official engagement party is under their belt, perhaps fans will be hearing wedding bells for these two a lot sooner than expected.