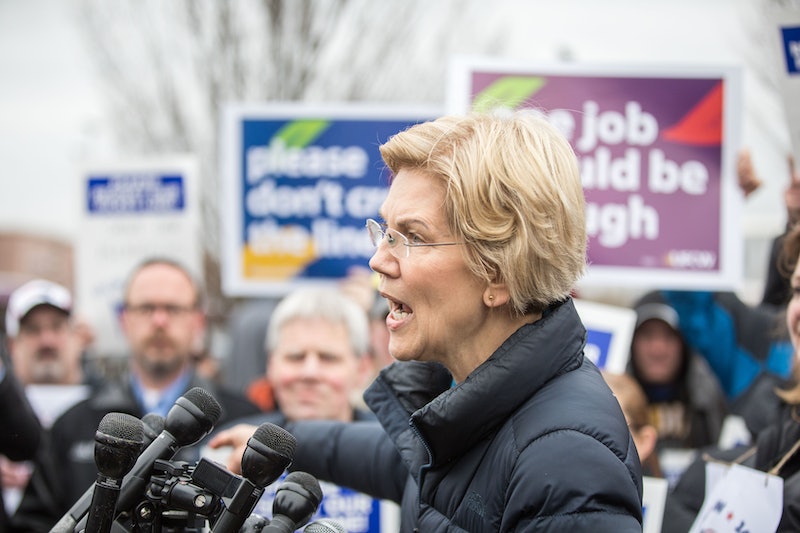 The Democrats don't have a nominee yet, but the sexist treatment that their 2016 candidate, Hillary Clinton, received from the media, President Trump, and others has already surfaced at one of the first 2020 town halls on CNN Monday night. One audience member asked Sen. Elizabeth Warren how she'd respond to sexism in the campaign, prompting a long answer detailing her 2012 Senate race. She then summarized her plans this time around. "One might say you persist," Warren said.

But before getting to her catchphrase, which came about from her response to Senate Majority Leader Mitch McConnell's attempt to silence her on the Senate floor, Warren jumped back to the year 2011 — before she had declared herself as a candidate for the Senate (or even decided to run).

Friends of hers, Warren said, began to tell her to run — even though they didn't think she'd win. She was up against Scott Brown, a Republican who had beaten Massachusetts Attorney General Martha Coakley in a 2010 special election.

"You’re going to lose because Massachusetts in 2011, according to conventional wisdom, was not ready to have a woman senator or governor. We never had, and people said it’s just not going to happen ― not at least for another generation," Warren began to explain at the town hall in Manchester, New Hampshire.

Warren said that she jumped into the race and the coverage of her was just what many might fear. "I jumped in the race, and sure enough, you know, the early coverage is about what I’m wearing," Warren said. "It’s about my hair. It’s about my voice. It’s about whether or not I smile enough. I didn’t."

Warren explained that she decided she was "going to make something count every single day" during that 2012 campaign. She started to find a little girl in the crowd at rallies and campaign events. "'Hi, my name is Elizabeth and I’m running for Senate because that’s what girls do,'" Warren recounted saying. Then they'd pinky swear to remember, Warren said.

She started counting how many pinky swears she gave. "I kept getting out there and hammering my message," Warren continued. "I kept getting out there, talking about what’s happening with working families across the country, talking about how Washington works great for the rich and the powerful, just not working for anyone else, and how we’ve got to fight back against that." Warren started that race being 17 points behind but beat Brown by 7.5 points in the end, she said.

The nomination fight is still in its early days, but The Washington Post reported that Warren has had trouble keeping up with others in terms of dollars and in the polls — despite putting out far more policy proposals than anyone else early on in the campaign.

With her most recent proposals to provide debt-free college and forgive student loans for some borrowers, that might finally be turning around. The policy proposals have drawn an increase in donations, and she has employed a large campaign staff to keep them coming, The Boston Globe reported. Plus, she has a lot of cash on hand from past Senate races.

Given how she's run campaigns in the past, she'll likely persist with the policies, overcoming sexism, and much more.