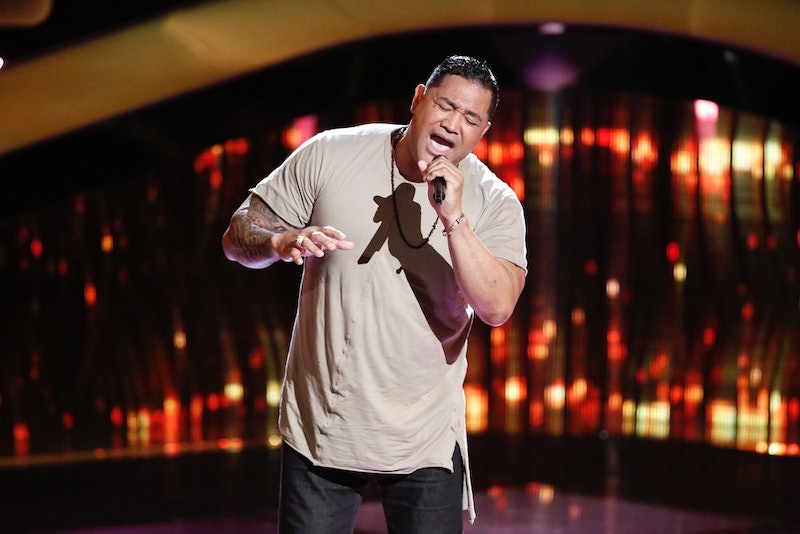 There are few reality show contestants better suited for the thrill of competition than The Voice's Esera Tuaolo. He’s better suited for this show than most, because, before coming onto the show, his entire career was based around rivalries and competitive bouts thanks to his time in the NFL.

Tuaolo was a professional football player (specifically, defensive tackle) and was with five different teams over the course of his nine-year career, according to his NBC site bio. Arguably, his most memorable season was in 1998 with the Atlanta Falcons, when he went to the Super Bowl. However, his musical career didn’t start with The Voice. He was known to sing in the locker room and performed the National Anthem before several professional games for NFL and other leagues, according to his bio. He wasn’t just known for his football and vocal skills, though. After retiring from the sport, he was one of the first NFL players to come out as gay when he decided to come out on HBO's Real Sports show back in 2002.

“When I came out, it was about me and my family — my kids and my partner at the time. It was about our happiness," Tuaolo says via a phone interview with Bustle. "You gotta come out because you want to be happy. So I didn’t really care what people thought. I lost a lot of family members and a lot of friends from the process. But, I’ve never hated on them. I just live my life happy.”

He certainly was continuing to live this happy life when he saw not one, but two Voice coaches turn around and proclaim they wanted him on their team. But when it came down to choosing a coach, Tuaolo says he wanted someone he had a lot in common with. For him, he felt that was Blake Shelton. Of course, he plans on bonding over their mutual love of football (which Shelton mentioned following his audition performance). But, he adds that watching Shelton on past seasons and seeing his track record of success on The Voice is what made the difference.

“What [Shelton] tries to do is encourages [contestants], and adds things to them that will help them to become a better singer," he says. "He doesn’t take away their style, and that’s what I love about him.”

Just like any good coach, Shelton is already working with Tuaolo on what he can improve on before the knockout rounds, because what works on the football field doesn’t always work on the stage. “For football, it’s quick short breaths, and with singing, as we all know as singers, we need to take deep breaths," Tuaolo says. "So it’s like those little technical things that he’s helping me with, which is awesome.”

While he's definitely a fan of Shelton’s work, Tuaolo says that his musical inspirations come from all kinds of eras. “Old school Smokey Robinson, a lot people of Mo Town: Luther Vandross, Aretha Franklin back in the day, Nat King Cole. But recently, I love Adele, and also Andra Day.” But he adds that if he had to choose a favorite, at least in terms of modern artists, he would pick Adele. Maybe he'll do his own rendition of one of Adele’s songs by the time the competition is over.

Tuaolo's end goals go deeper than just wanting to win the competition. For him, he also wants to use his platform to be a positive LGBTQ role model, especially growing up without many of them. “Playing in the NFL [as a gay man] in the '90s was not a fun thing at all. There was not any support or anything like that ... Any time the topic of homosexuality would come up in the locker room it would always be negative and be very hostile," Tuaolo says. "But, now, to have a voice and be a servant to the younger generation is absolutely amazing ... I’m using this platform to bridge this gap and bring people together and make people understand that your dreams are never lost,” he says. “I’m 49 years old and I’m on The Voice.”

It remains to be seen just how far Tuaolo will go on the show, but he's already achieved quite a lot in his short time. So, this is one dream of his that is certainly not lost.