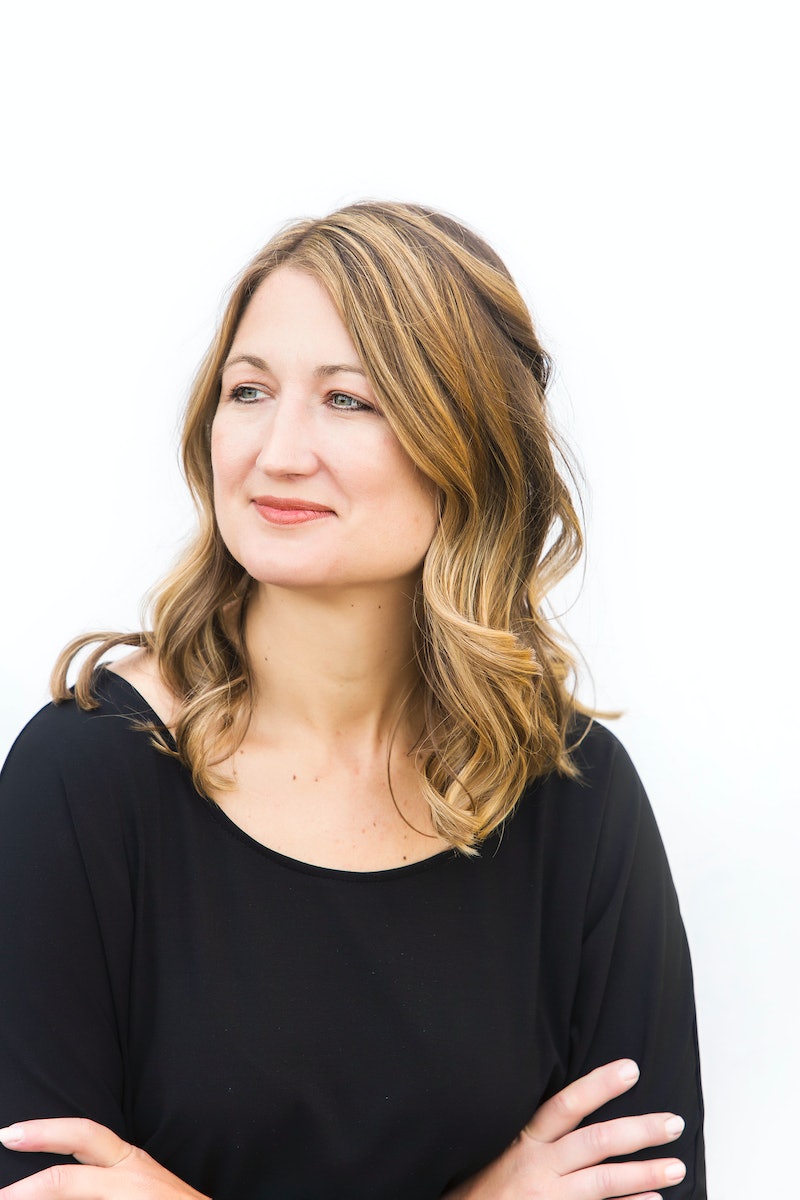 Lindsey Roy was just 22 when she started her career at Hallmark, working her way up from the assistant level to becoming product manager, to eventually being named the youngest vice president in the company's more than 100-year history. Today, the 41-year-old serves as chief marketing officer of Hallmark Greetings — a job she says her younger self would have been thrilled about. "I think she’d be excited with where we are," Roy tells Bustle. "Not everything would be as predicted, but [it's] even better, and that’s kind of the fun serendipity of life."

At 28, Roy had recently been promoted to innovation director and was living by herself in Kansas City, hanging out with friends at local bars and listening to Rascal Flatts. A lot has changed since then, she says, but her number one professional goal has stayed largely the same — to do the best job she can possibly do, no matter what role she's in. Looking back, she says it's that kind of mindset that's helped get her to where she is today. "I think it’s just a series of good twists and turns where you try to do a good job, you get lined up with great leaders and managers, the work changes, and then your story is cumulative versus one big moment," she says. "I think sometimes you just have to reflect back and see those moments."

Here, she tells Bustle Deputy Lifestyle Editor Kathryn Kattalia about her biggest source of anxiety at 28, the advice she'd give her younger self, and the one moment of her career when she finally knew she'd made it.

Kathryn Kattalia: You had already been at Hallmark for six years when you were 28. What was your job title?

Lindsey Roy: At that era of my career, I was an innovation director. [I was] leading work to uncover opportunities for business growth. What consumer needs could we meet that we weren’t? What big cultural trends could we leverage into growth? [...] It was very much a fun job.

KK: I’m curious to know where you were living at the time. Could you describe what your home looked like?

LR: I was moving from a condo to my first house I’d purchased. [...] The condo I was living in was right by what we call the plaza area — our retail, shopping, bar, and restaurant district of Kansas City. I was within walking distance of all that good stuff. [...] I remember the outside of it almost looked like the Brady Bunch house. Very 1970s. The inside had literally no windows outside of a sky light, so I had to make do with some creative art. It was definitely not an ideal pad, outside of location. I had just gotten promoted to innovation director, and I bought my first house a couple of miles away in a part of town that has 1920s, original kinds of homes here in Kansas City, so I had just started to move into that. So that was kind of a transitional time for me.

KK: What was your favorite thing about living in Kansas City?

LR: First of all, I have roots here. I grew up in a small town in Kansas a few hours away, so I have a lot of friends and family near. Secondly, when people think Kansas City they might think wheat fields and barns. That is where I grew up (and I loved it!), but Kansas City is also a major metro thriving with art and culture and music and downtown revitalization. It’s a perfect mix of big city and smaller town ease and convenience, and [has] a great cost of living.

KK: What would you say your biggest source of anxiety was back when you were 28?

LR: Honestly, I’m sure it was more personal angst. [...] I was wondering what the next life would bring — I think [that's] what a lot of people are experiencing at that time. Where's your life going to end up? What’s your life going to look like? Are all your hopes and dreams going to pan out like you hope they will? I don’t necessarily remember having a lot of work anxiety, but I think at that age people have just a lot of changing life dynamics, and you’re just trying to figure yourself out. [...] I hoped for continued career growth and challenges. I hoped for having the opportunity to create an amazing family of my own. I hoped for keeping my friends close no matter where life took us.

I would say to worry less about the small stuff. Trust your gut and the hard work you’ve put in and know that will ultimately matter more than the way you word something in an email.

KK: Do you mind telling us how much money you were making at the time?

LR: Far less than I am now! Just enough to live and travel a little bit, but not enough to not always worry about paying that credit card bill.

KK: Where did you like to travel? Is there a particular trip that stands out?

LR: I love music, so trips to see live music in places like New Orleans and Nashville were my favorites.

KK: What kind of music were you listening to? Did you have one go-to anthem you would just listen to to pump yourself up?

LR: I was always a person who was listening to live bands and concerts. The White Stripes were big at that time. I also always liked country. Rascal Flatts came out with "Bless the Broken Road," and when you’re in tumultuous 28-ville, I was like, things are going to work out. So that was kind of an anthem.

LR: That was kind of the start of reality TV. [...] Survivor was still cool. I watched the regular Apprentice, before the celebrity one, but that one has such baggage now. The Amazing Race, all of those kinds of things. [...] One other show I distinctly remember from that era was the West Wing. That was awesome, and kind of at its height then. I never missed that.

KK: Do you have a single favorite clothing item from when you were 28? Anything in your wardrobe that immediately brings you back to that time?

LR: The first thing that pops into my mind is a pair of green suede cowboy boots I bought on Michigan Avenue. They were super cool — I even think that today. But they were a big splurge at the time, and definitely outside of my normal black/brown/gray wardrobe.

KK: What did a typical Friday night look like?

LR: On a Friday night I was out and about on the town at 28. Anything from dinner with friends to our favorite live music venue, to maybe just sitting around having a cocktail around a jukebox in a small bar.

KK: What was the ONE thing you and your friends talked about most whenever you got together?

LR: Relationships. At this stage in life, some of my friends were single, some were dating seriously, some were married. This was a dynamic time for relationships.

I definitely have a broader view now for the mission and the purpose of why I do what I do.

KK: Professionally, what one thing would you tell your 28-year-old self to do differently?

LR: I would say to worry less about the small stuff. Trust your gut and the hard work you’ve put in and know that will ultimately matter more than the way you word something in an email.

KK: Was there ever just one moment in your career where you were like, "Yes! This is it! I’m making it!"?

LR: I remember the first time I got an invitation to ride on the corporate jet, instead of just going commercial. It was the first time I’d ever had an opportunity to ride on a private plane, and you know, showing up and hopping right on, and being with big executives when I was still fairly junior. [...] I remember that being a day that I didn’t want to miss.

KK: I’d love to hear what your goals are now, and how those have changed since you were 28.

LR: I’ll start with what hasn’t changed. I still feel like I show up every day with a balance of confidence and humility. I think you have to be confident in yourself and know what you’re bringing, but also be humble to know you don’t have all the answers. No matter what level you get at, you’re not the person who knows everything. So that’s still the same.

Some things that have changed: I definitely have a broader view now for the mission and the purpose of why I do what I do. I can look back and say, "Wow it’s been awesome to work at a brand that does put good in the world." But my mindfulness of that is a lot more extreme today than maybe it was when I was 28. The industry I’m in (social expressions) is about caring and humanity and relationships. How can you not like that?

More like this
At 28, Rosie Perez Risked Her Career To Stop Playing Stereotypes
By Gabrielle Bondi
At 28, Debra Jo Rupp Was Living A Much Different '70s Show
By Grace Wehniainen
Twitter Has *A Lot* To Say About The "Single Penalty”
By Sam Ramsden
6 Organizations Fighting Police Brutality That You Can Support Right Now
By Syeda Khaula Saad and JR Thorpe
Get Even More From Bustle — Sign Up For The Newsletter
From hair trends to relationship advice, our daily newsletter has everything you need to sound like a person who’s on TikTok, even if you aren’t.