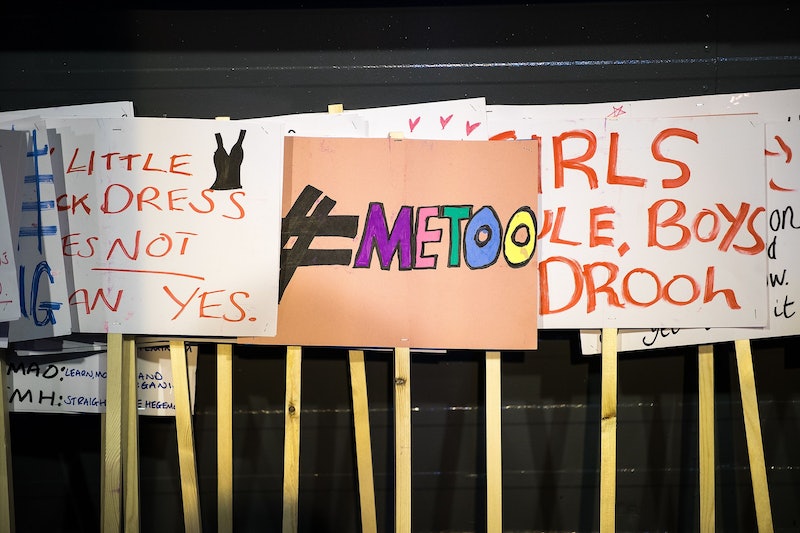 When The New York Times publicized accusations of sexual harassment and assault against Harvey Weinstein in Oct. 2017, the hashtag #MeToo — created by Tarana Burke in 2006 — went viral worldwide. The U.S. and other nations have been forced to reckon with rape culture in a meaningful way. The #MeToo movement has pushed conversations about what constitutes sexual assault and harassment, toxic masculinity, and consent to mainstream, public discussions. It has hardly spared any fields, spreading quickly to encompass academia, art, politics, and literature.

Last year, sexual assault and harassment allegations against Sherman Alexie, Daniel Handler, and Junot Díaz rocked the industry. In Sweden, the 2018 Nobel Prize in Literature was postponed because of a scandal resulting from sexual harassment allegations made against Jean-Claude Arnault, husband of Swedish Academy member Katarina Frostenson.

The romance genre has been largely spared by accusations of sexual assault and harassment, due in no small part to the fact that the vast majority of its writers and editors are women. Has #MeToo changed romance publishing at all? Here's what the genre's writers and editors have to say.

Outside of its readership, romance maintains a rather unfavorable reputation for "bodice rippers" — classic romances with relationships that may appear problematic to some modern-day readers, due to the "alpha-male" characteristics of the protagonist's lovers. But labelling those romance novels as "rapey" may do a disservice to the women who wrote and read them, because — as the recent fervor over the controversial holiday song "Baby, It's Cold Outside" shows — there was a time when women had to say no, or pretend to be inebriated, in order to engage in consensual sexual contact without having their reputations ruined.

"I was raised in the era where good girls said no, even if they meant yes," Carly Bloom, debut author of Big Bad Cowboy tells Bustle, "and it was considered a type of flirtation. We had a hidden (and blurry) language of consent that was the unhealthy result of sexual suppression. We were conditioned to find it romantic, just like we were conditioned to believe catcalling was 'flattery.'"

Still, "The 'bodice-rippers' of yore are not generally what you get these days when you open a romance novel," Jenny Holiday, the contemporary romance author behind It Takes Two, writes in response to an email to Bustle. "You’re more likely to get a story about a strong, independent heroine getting what she wants out of life and love."

According to Hultenschmidt, the job of the romance publisher is to give its readership what they want, even if some people may find certain tropes to be problematic. "There are certainly a number of readers who love that alpha hero and will continue to love that alpha hero." she says. "It’s our job in the industry to make sure that there’s something to appeal to every kind of reader.... I think it’s important to recognize that there is a market for all kinds of books, and we don’t want to shame people for any part of it that they enjoy."

Prioritizing readers' needs and desires is what romance is all about, Michelle Osgood, who writes paranormal queer romances like Huntsmen, says in an email: "[O]ur fantasies were formed under a rape culture, which limits women and queer folks' access to sexual pleasure and denies them opportunities to freely consent. Romance has always been about granting that access. And that includes access to fantasies involving force, dubious consent, or non-consent."

Even if readers disagree with scenes of dubious consent, Osgood says, they still serve a valuable purpose for particular readers, who need the safe space of fiction to explore what they want and need: "Characters are fictional, their encounters are fictional. That gives many readers, and writers, space to explore their fantasies safely. The question is less whether or not the characters consent, but whether or not the reader consents to the content."

Some psychologists agree that romance novels and other outlets for sexual fantasies can give individuals safe spaces to explore their desires. Studies have shown that "between 31 and 62% of women have rape fantasies," which trauma-resolution specialist Dr. Leon F. Seltzer terms as "safe rape." Fantasies of being ravished and dominated may actually empower some people, Seltzer concludes, saying, "[U]ltimately, choosing to forfeit control may not be to lose it... but to powerfully assert it."

A reader can't consent to improperly categorized content, however, as Latoya C. Smith, an editor and agent at LCS Literary, emphasizes. In the wake of #MeToo, Smith says, she is "seeing a lot more romances of color being acquired by major publishers," but those romances aren't always categorized in the proper way, a move she says hurts authors, readers, and publishers. Smith believes the industry is starting to realize that black authors write more than urban romance, but that change has been a long time coming.

Romance industry insiders want to make one thing very clear — Romance has pre-empted #MeToo in many ways. Echoing Hultenschmidt's sentiments, Julia Quinn, the author of historical romances like The Other Miss Bridgerton, says in response to an email from Bustle that "Consent has been topical in the genre long before it hit the news cycle." Quinn's fellow historical fiction writer, Devil's Daughter author Lisa Kleypas, offered a similar take in her own response to Bustle's email: "MeToo has confirmed a direction that romance novelists and editors were already heading in, even before the movement officially started, because it was what readers wanted.... Using [readers'] opinions and preferences as a barometer, you could see the advent of MeToo a few years ago, when enthusiasm and buzz started flowing in the direction of books featuring stronger heroines and more enlightened heroes."

"Consent has been topical in the genre long before it hit the news cycle."

#MeToo has increased awareness about the need for explicit and enthusiastic consent, however. Although some writers have had their heroes leave heroines untouched until they give enthusiastic consent, other novelists have only clued into the need much more recently. Consent "[i]s a part of the rules," Carla de Guzman, who writes contemporary romance novels like How She Likes It, says in an email to Bustle. "To me, it’s as important as a happily ever after, or a happy-for-now ending. It’s as important as good characters, fun dialogue, a solid premise and witty banter."

For many authors, the decision to include explicit and enthusiastic consent is part of a personal philosophy, rather than something imposed on them by the #MeToo movement or readers it has informed. A Matter of Disagreement author EE Ottoman, who writes queer romances in a variety of settings, says in an email to Bustle that his books and stories always make a point of including consent. "I think the bottom line for me I never want to add to that little voice in the back of some survivor's head saying 'I deserved what happened to me' or 'maybe what they did was excusable,'" Ottoman says. "That's the exact opposite of what romance is supposed to do."

For her, de Guzman says, consent and "the possibility of a non-toxic male" have always been part of what romance writing is, at its very core. "When I first started writing romance novels," she says, "one of the very first rules I learned was that any steamy scene you ever wrote had to be 'consensual, responsible, and hot.'" She adds that "romance, as a genre, has always upheld what the #MeToo movement has fought for — we write heroes that know to ask for the heroine’s consent, toxic masculinity is not a ‘sexy’ characteristic for a hero to have, and harassment is unacceptable."

"I think the bottom line for me I never want to add to that little voice in the back of some survivor's head saying 'I deserved what happened to me' or 'maybe what they did was excusable.'"

Most romance authors Bustle interviewed say that they haven't encountered many authors who hold onto the belief that consent isn't necessary or sexy, even after #MeToo. Others acknowledge that those holdouts exist, but are few and far between. Bloom advocates for a little grace toward writers who wanted to do things the old-fashioned way, because change doesn't come as easily as flipping a switch: "It is really hard to re-program yourself if you’ve been raised in a patriarchal culture."

Perhaps more important is the new likelihood that romance readers will call out problematic material they find in the genre. Of the lesbian fiction community, Yolanda Wallace, author of Tailor-Made and other female-female romances, says in an email, "Our audience is passionate and vocal. If our peers didn’t call us out for engaging in problematic tropes, our readers certainly would." That authors listen and respond to their readers' criticisms sets romance apart as a genre, Eva Leigh, author of historical romances like Dare to Love a Duke, writes via email: "[I]t's not uncommon to occasionally see a reviewer or reader say, 'Hey, this kind of behavior from your hero isn't cool,' and an author to respond with, 'I hadn't thought of that when I wrote it, but I can see what you mean, and I'll try to do better next time.'"

The writers and editors who spoke on the record with Bustle agree on one thing: romance has not been changed by #MeToo. Instead, it pre-empted many of the movement's goals. The Pursuit Of... author Courtney Milan says in an email to Bustle that asking how #MeToo changed romance isn't the right pursuit of inquiry. "The right question," she says, "is, how many of us have been using our romance fiction as a way to discuss harassment, assault, toxic masculinity, and consent long before #metoo ballooned in the public discourse."

"If our peers didn’t call us out for engaging in problematic tropes, our readers certainly would."

As Cole McCade, author of His Cocky Valet and other male-male and male-female romances, and who also writes as Xen, says in an email, not only have conversations #MeToo sparked in the mainstream been going on in romance, but they have been present among writers and fans alike: "Many pioneering authors such as Alyssa Cole, Alisha Rai, Suleikha Snyder, Courtney Milan, Kit Rocha (Bree and Donna), Nalini Singh, and numerous others have been having this conversation and reflecting it in their fiction. Blogs such as Smart Bitches, Trashy Books have long been fostering discussion through analysis of books and how they change through the history of romance publishing, and what those tropes meant to us then and how they change as we change as an industry. These women have been there; they've just been waiting for us to catch up."

This began with the question of how authors and editors believe that #MeToo has changed romance novel publishing. Those who agreed to be interviewed by Bustle believe that men's conduct in romance novels changed long before the public demanded justice for victims of sexual assault and harassment. A better question might be whether romance has empowered victims to speak out against their attackers, and to speak up for a higher standard of conduct.