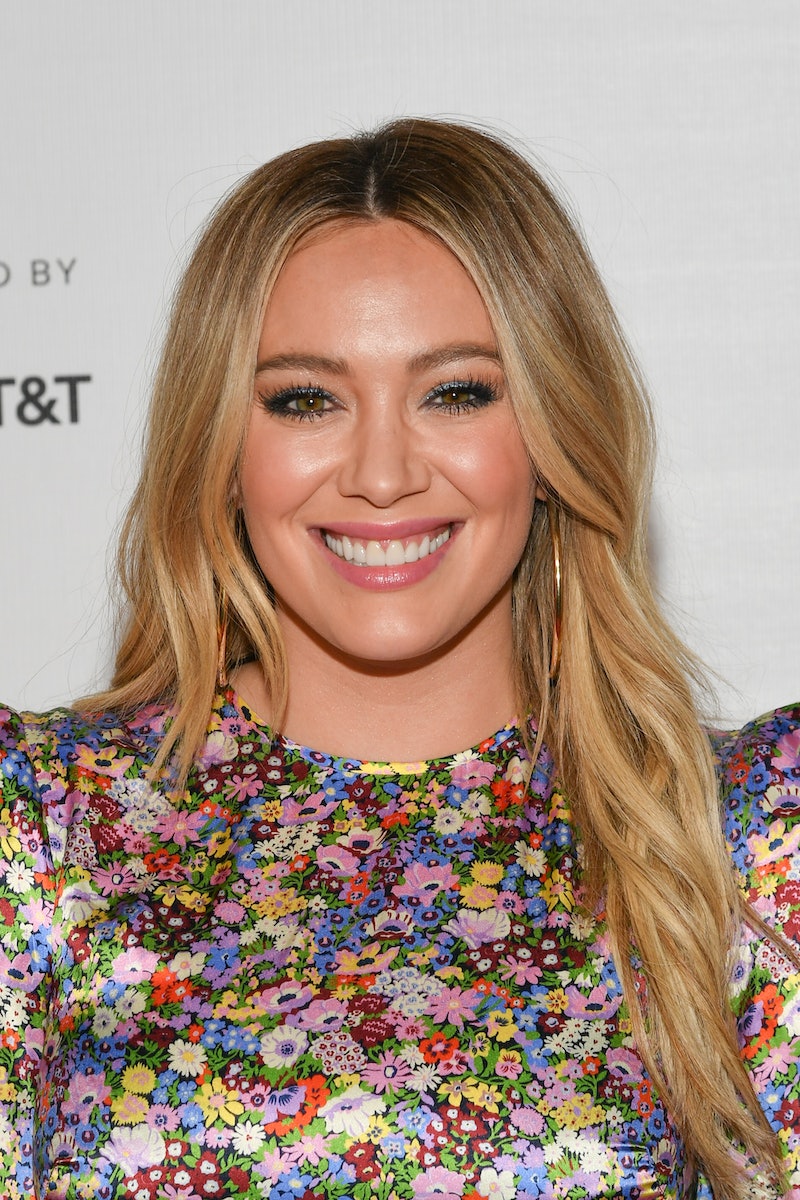 Hilary Duff's daughter Banks is less than a year old, but she's already making her mark on the family. The Younger actor shared a sweet sibling moment of her older child Luca with Banks on Instagram, and it really is too cute. The video of Duff's son watching his sister learn to crawl will warm fans' hearts, since he's super supportive throughout the whole process.

In the clip, Banks crawls across the room, toward Duff and 7-year-old Luca. The Lizzie McGuire alum encourages her daughter to "Come on!" Luca joins in, saying to his sister, "You almost got me! You almost got me!" He's even imitating his mom in the tone he uses with the baby, further emphasizing how supportive he is of the little one. Even Duff looks surprised by the sweet interaction between her kids.

"We got a mover," Duff captioned the video. Her fiancé, Matthew Koma, also left a sweet comment on her Instagram post, writing, "My family" along with a heart emoji. Her sister Haylie also wrote a reply. Plenty of fans chimed in too, commenting on how cute Luca's actions were, as well as how strong Banks is for crawling so well at seven months.

As fans may recall, Duff and Koma welcomed Banks in October. "This little bit has fully stolen our hearts!" she wrote in her Instagram announcement at the time. "She joined our world at home on Thursday afternoon and is absolute magic."

Since her daughter was born, Duff has shared plenty of photos of the baby, including some with her older brother. Earlier this week, Duff posted an adorable picture of Luca holding his sister while walking down the street.

Still, for Duff, being a mom to two young children has been filled with a lot more than just the cute sibling moments. Earlier this month, Duff opened up about her decision to stop breastfeeding, explaining in an Instagram post how difficult is was for her to pump breast milk while at work, especially with a dwindling "milk supply."

"I was sad and frustrated and feeling like a failure all of the time," Duff wrote. "When really I'm a bad ass rock star." The actor went on to say that moms are often "stuck on the feeling we can always do a little more." Her post resonated with a number of fans and fellow moms, who commented with their appreciation. It's great to see Duff trying to end some of the stigmas that can come with being a mom, especially a working mom.

Duff has been super honest about the fact that parenting isn't always easy. But seeing her two kids get along so well is heartwarming. And as she and Koma prepare for spending the rest of their lives together — they got engaged earlier this month — it looks like Luca is totally on board, too.

Luca and Banks' relationship couldn't be sweeter. And when Banks moves on to taking her first steps, her brother will likely be there to cheer her on then, too.