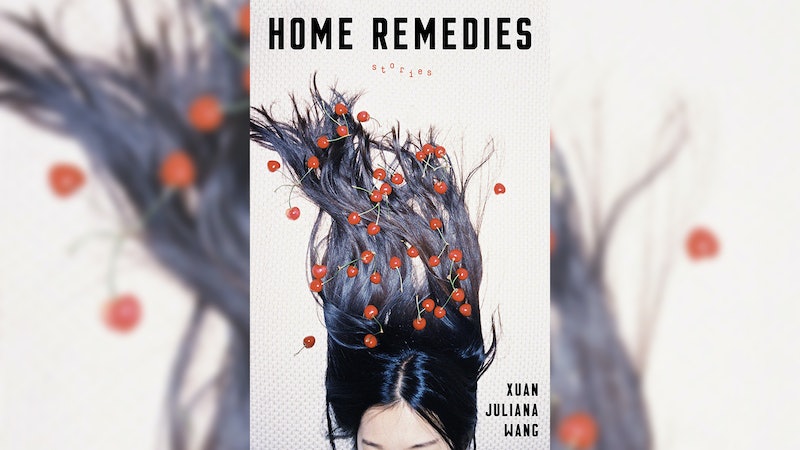 There are those short story collections that you can consume little by little, that you can pick up and put down at your leisure, enjoying just a small taste here and there. And then there are those short story collections that consume you, that worm their way into your bookish heart on the first page and, by the last, have spread through your entire being. Home Remedies by Xuan Juliana Wang falls into the latter category.

Over the course of 12 stories, Wang explores a new generation of modern Chinese youth: A group of first-generation siblings left to figure out how to survive American life without their parents in New York’s Chinatown (in “Mott Street in July”); a spoiled teenager or “fuerdai,” a “second-generation rich” kid who will go to extreme lengths to preserve his privilege (in “Fuerdai to the Max”); a struggling writer whose life is transformed when a mysterious gadget with the power to age whatever she puts into it arrives in the mail (in “Future Cat”); an Olympic-hopeful synchronized diver whose biggest challenge isn’t the high board but the complicated feelings he has for his partner (in “Vaulting the Sea”); and an immigrant father who understands computer science better than he does his second-generation Chinese-American daughter (in “Algorithm Problem Solving for Father-Daughter Relationships).

Although their stories only span a couple dozen pages at most, all of characters Wang writes into existence feel whole, complete, and fully developed. Their lives may be drastically different from one another — some live in Beijing’s most expensive high-rises while others struggle to survive on New York City’s streets — but their struggles are all echos of one another: They desire to belong to the present, they're afraid of letting go of the past, they long for love and acceptance, and they fear alienation from the culture they come from and the one they wish to be a part of.

“We are what the people call Bei Piao— a term coined to describe twentysomethings who drift aimlessly to the northern capital, a phenomenal tumble of new faces to Beijing,” the narrator of “Days of Being Mild” explains. “We are the generation who awoke to consciousness listening to rock and roll and who few ourselves milk, McDonald’s, and box sets of Friends. We are not our parents, with their loveless marriages and party-assigned jobs, and we are out to prove it.”

Whether it is young Chinese-American girl living in Paris whose life is transformed by a dead girl’s wardrobe or an old woman heading to a vacation in space, each individual to grace the pages of Home Remedies has their motivations, their desires, and more often, their fears on full display. It is with the help of Wang’s masterful manipulation of the surreal that they become amplified, tangible things.

Wang plays with different perspectives and experiences of Chinese youth throughout her collection, but her subjects aren’t the only things she changes story to story. The versatile author also experiments with form as well. As the title implies, “Algorithmic Problem-Solving for Father-Daughter Relationships” uses a set of rules and operations to investigate strained familial relations. Written as a catalogue, the book’s titular story “Home Remedies for Non-Life-Threatening Ailments,” explores things like boredom, longing, sadness, and self-doubt in list form. For discomfort from “seeing your mother kiss another man,” it suggests you “Stare at the bouquet of white lilies on the kitchen island with disdain; will them to die with your hatred.” For anxiety that stems from “unfulfilled potential,” it recommends you “Stop drinking coffee, start rolling cigarettes, bake cookies and share. Gain weight and fret.” These imaginative changes in structure help make Home Remedies more engaging, and encourage readers to not only frantically flip from page to page, but from story to story.

A carefully wrought collection filled with imagination and empathy, Home Remedies is a collection you won't put down until you've read every single page.