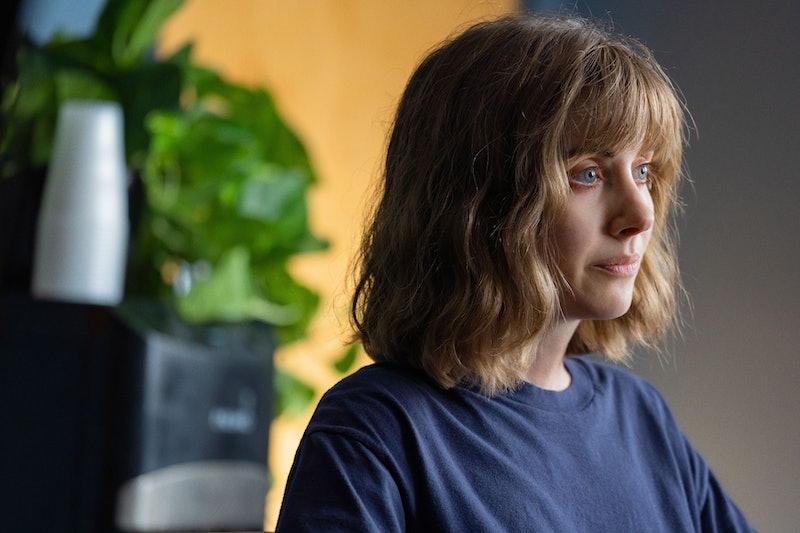 Whatever expectations you have about Alison Brie's new Netflix movie Horse Girl, you can throw them out the window. This is one movie that does not go anywhere its audience expects it to, adding twist upon twist until it ends with one very surreal and confusing scene. So how can one explain the Horse Girl ending? Is such a feat even possible? Or is this simply one of those movies were viewers are meant to draw their own conclusions, with no one technically having the "right" answer?

In the film, which Brie co-wrote, Brie portrays a young woman named Sarah. Sarah works at an arts and crafts store, lives with a much more social roommate (Debby Ryan), attends Zumba classes, and spends her free time watching a paranormal crime series called Purgatory and trying to hang out with the horse she had as a child — much to the chagrin of the horse's current owners. To most, her life seems lonely and depressing, but Sarah doesn't seem too bothered by the hand she's been dealt. At least not until some strange things start happening to her. It's revealed that Sarah's grandmother was a paranoid schizophrenic who tragically died homeless and alone, which had an effect on Sarah's mother. Her mom suffered from depression, and died by suicide a year before the film takes place. So when seemingly supernatural things begin happening to Sarah, she can't be sure if she's heading down her family's path of mental illness or if she's actually experiencing something paranormal.

Sarah begins having strange recurring dreams where she's lying in a white room between two strangers. She also starts waking up in strange places with no recollection of how she got there. She then experiences missing time, mysterious bruises appear on her body, and she begins seeing one of the strangers from her dreams in real life. After some research, Sarah starts to believe that she's being abducted by aliens. She then starts to think, based on her strong resemblance to her late grandmother, that she is an alien-created clone of her grandmother. Finally, she comes to the conclusion that she is not a clone, but rather she is her grandmother, and has traveled through time thanks to the aliens.

Sarah's beliefs lead her to be sent to a mental hospital for evaluation. Once she arrives there, the film really blurs the lines between what's real and what's not. For an extended sequence that takes up almost the entire third act of the film, Sarah seems to escape the hospital, meet the other stranger from her dream, have a sexual encounter with her favorite TV character, travel through time, and see other versions of herself. Logically, none of this should be real, but it's left unclear as to what's real and what's not. Following this episode, Sarah is released from the hospital, which brings us to the movie's final scene.

Dressing up as her grandmother, Sarah steals her old horse Willow and leads the horse away. She walks by her work, where her coworker sees the horse walk by the front window — a scene which also occurs in the beginning of the film. Sarah leads the horse into the woods and tells her that she'll always protect her before lying down in the grass. Sarah then sees a UFO in the sky, which pulls her into the air in a beam of light. She and the UFO both disappear, leaving Willow alone in the woods. And that's the end of the film.

So what happened? The most obvious explanation is that the end of the movie is another delusion by Sarah, who is still likely in her room at the mental hospital. Or maybe all of the film's supernatural elements are real, and Sarah was taken by the aliens at the end of the film. Maybe there are also multiple Sarahs and time travel at play, which would explain how her coworker saw the horse at the beginning of the film when the Sarah she knows had not yet stolen it.

These multiple interpretations of the ending are exactly what the filmmakers intended, as not even Brie and her co-writer/director Jeff Baena totally agree on its meaning. "Our hope is that people have myriad interpretations of the movie[’s ending]," Brie told Vulture. "We certainly have a theory about what we think is going on, but I’d venture to say that even Baena and I have slightly different takes about what the truth is; I’m a bit more open to interpretation than he is."

So there you have it, straight from the horse (girl)'s mouth: You can try to explain the ending to Horse Girl all you like, but the film's conclusion is left ambiguous by design.