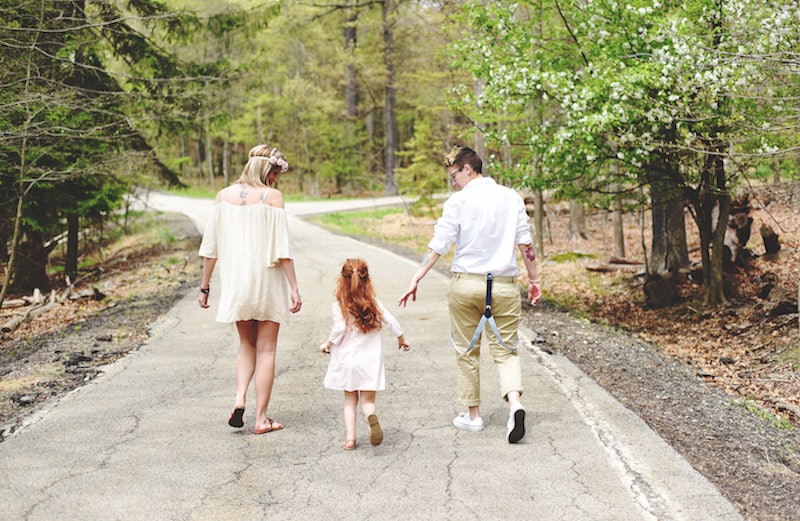 A lot has changed in the six months since Donald Trump was sworn into office, both on a political level and a personal one. Bustle’s State of Our Unions series looks at how millennial women's relationships with their friends, family members, and romantic partners have been affected since the 2016 election.

April 22, 2017 was nothing short of a magical day, but a heavy, grey cloud hovered over the intimate crowd of close family and friends who watched my wife and I take our vows. It was raining that day, but the cloud I'm referring to was a metaphorical one that represented the absence of family members who, up until just a few short months prior, would have been on the first set of returned RSVPs.

My cousins and I had a falling out just a few short days after the presidential election, and now Donald Trump, with his boastful bigotry, had made an indelible mark on my special day.

I came out as bisexual just over two years ago when I fell in love with the woman who is now my wife. My conservative, Christian family from small town West Virginia were nothing but open, loving, and supportive. The first family event I took my wife to was my cousin's wedding, and he and his new wife welcomed her with warmth and excitement.

Once we got engaged, my same cousin's wife was one of the first to reach out with congratulations, gushing over our engagement photos and filling my inbox with her wedding planning tips. I felt, for lack of a better word, blessed, to have such swift support members of my family, whose only real reference of an openly gay woman up to that point had been Ellen DeGeneres. Wedding planning was a breeze. Hillary Clinton was going to be President, and life was good.

Even though they were accepting of my sexuality, my family has always existed largely in a state of "don't ask, don't tell" when it came to politics and voting habits. Once I turned 18 years old, I promptly registered as a Republican just because that's all I really knew. I couldn't tell you who anyone in my family has ever voted for, other than my stepdad, who once chirped that he like Ronald Reagan because his bank account had more in it back when he was president.

To be completely honest, up until last year, I had never even voted myself. I didn't make the effort to educate myself on the issues, so I didn't feel comfortable enough in my own opinion to cast a vote. I was a middle class, straight (or so I thought), millennial white woman. My state is almost as red as it gets, and I didn't really think my vote mattered all that much or that policies impacted me directly.

After I came out, I realized how foolish I had been. My wife is extremely passionate about politics, but it was about more than that. I suddenly found myself a member of a marginalized community. My partner had a daughter whose birth mother was an Iraqi refugee. As Donald Trump began to gain momentum in the primary election, I started to get scared. Could this really happen? This man could do some serious damage to my country and my family.

Once Trump won the nomination and picked up even more steam against Clinton, I became terrified, and I got vocal about it. I attended rallies, I sent articles to my parents, I pleaded on social media for everyone who loves and supports me to please put their taxes and guns aside and stand up for human rights. Not only for my rights, but for those of any and every community that isn't made up of straight, white, wealthy men. My mother assured me that my family would be on the right side of history with this one.

Election day came and went, and I woke up in a stupor of shock. We lost. How could we have lost? The future was supposed to be bright and fair, not dark and hate-filled. An open Supreme Court seat was going to be filled with someone who wouldn't hesitate to pass a religious freedom bill that would allow any of our wedding vendors to refuse to bake us a cake, or sell us the purple hydrangeas I wanted. I had flashes of someone showing up at our door to tell my fiancé that her daughter could no longer be raised in the house with a same sex couple. But it was okay, because my family didn't choose this. Right?

One November 9th I saw an Instagram post from my cousin of he and his wife on a plane, celebrating the victory of President Donald Trump. He wasn't just happy, he was gloating, captioning the photo with hashtags like #Killary and #Hillaryforprison, exclaiming his excitement for Trump to make America great again. My mouth dropped. This was my family. This was the same man who hugged my partner and welcomed her. This was the man I've looked up to my whole life, who I viewed as a big brother as I grew up as an only child.

Simultaneously, my fiance had reached out to her ultra conservative, Christian cousin to ask him if she should send him a save the date card, as he had previously expressed disagreement with her sexuality. He responded with a firm no. Devastated over these election results and the realization that we didn't have the support we had assumed, I took to my personal blog for some cathartic writing. I wrote about the destructive election results, how I wasn't going to stay quiet about my discontent, and the dismay and sympathy I felt over my family, who all had to sit across from one another for dinner on Thanksgiving so soon after this historical event. The awkward family Thanksgiving dinner was about to reach a whole new level.

Promptly after hitting publish and sharing my piece on Facebook, my cousin's sister-in-law ripped into me in the comments section. She called me a bigot, and told me that I shouldn't come to Thanksgiving if I didn't want to see any of them. My cousin's wife texted my mother to tell her I'd crossed a line in bashing my family over politics. I sat at the kitchen table and choked on my heaving sobs as my partner consoled me and whispered that blood doesn't necessarily mean family.

About a week later I reached out to my cousin, apologized to him for all of the internet chaos, and explained to him how badly his decision had hurt me, but that I'd love to sit down and talk to him so I could better understand. His response was brutal, and it sliced through me like the sharpest knife. My cousin, always frank and to the point, informed me that I had made my own bed when I chose this lifestyle, and that if I couldn't respect other people's right to have their own opinions, then neither he nor his brother and their wives would be attending my wedding.

That was it. Their save the date was never followed up with an invitation, because I couldn't bear to receive the card back with the tiny black 'X' in the 'regrets' box, like a confirmation of their rejection of me, the family I created, and the opportunities and civil rights we equally deserve.

My family's table at my wedding was startlingly more bare than I had anticipated, and the absence of my cousins was glaring to those who had been attending our family gatherings. The seating arrangements are alway the same, but now the seats flanking my grandmother were filled by my great-aunt and uncle instead. But the intimacy of our wedding and reception created a sense of comfort I hadn't felt since before the election. Our outdoor wedding was confined to the tented area due to rain, but the small, protected space was tightly packed with 60 people who showered us with a downpour of love and support.

The silence that has come from my cousins used to be deafening, but now I focus on the joyful noise of my stepdaughter's laughter and the barks of our new puppies. Donald Trump's election was a shock to our country, but looking back, he brought into focus some truths we may never have seen before.

The seeds of love, tolerance, and acceptance that I'm planting in the family I've chosen to grow and care for in my new little home are the ones that deserve my attention the most. My stepdaughter will grow up believing that families can take any form, and that love knows no gender, religion, sexual orientation, skin color, or nationality.

Just last week when my stepdaughter was reflecting back on our wedding she said "Bethy and Mommy, did you know I can marry whoever I want, even a boy?" Our little Mia Grace can marry anyone she wants, and my chosen family will fight every day to make sure that statement is always true. Love is love, and the state of my union, Mr. Trump, is stronger than ever.

More like this
The 19 Best Tweets & Memes About Bisexual Awareness Week
By Lexi Inks
Pro Footballer Zander Murray Is "Blown Away" By Support After Coming Out
By Sam Ramsden
10 Ways To Be More Empathetic To Your Partner
By Raven Ishak and Lexi Inks
Think Your Partner Is Cheating? These Tarot Cards May Confirm Your Suspicions
By Kristine Fellizar
Get Even More From Bustle — Sign Up For The Newsletter