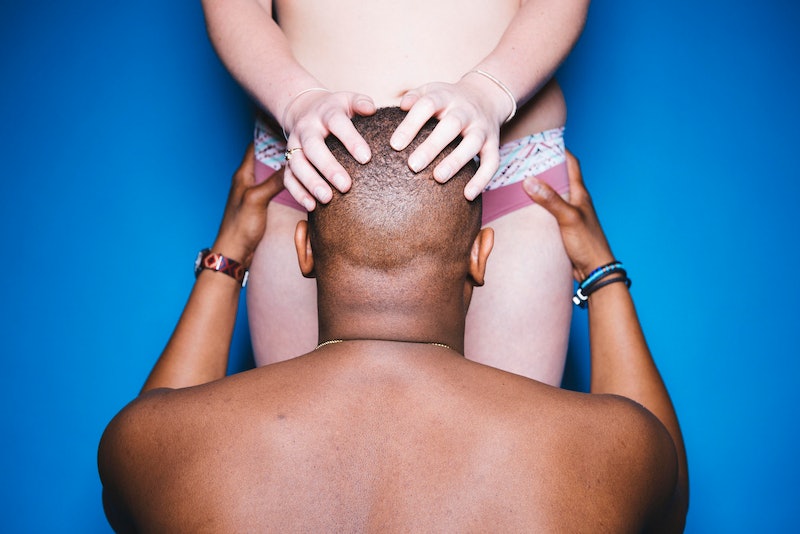 “Just breathe,” he told me. “Realize that I want to be here and I could stay down here for hours, if you wanted me to.” Those were the words that were said to me not long ago by a man I was seeing. He said them as his chin was on my pubic bone, looking up at me. “I want you to forget where you are; let your mind go someplace else. Don’t even think.” But, of course, when someone tells me not to think, I do the opposite, and instead of letting my mind go someplace else, while he performed oral sex on me, I decided it was the ideal time to recap every mistake I’ve made and wonder what sort of facial expressions, if any, he might be making down there. You know, the usual cunnilingus thoughts.

From my very first round of oral sex in high school, I’ve struggled with enjoying it. My high school boyfriend, although more than willing to be on the receiving end, couldn’t bring himself to give it. “It’s gross,” were his exact words when the conversation came up. Young and inexperienced, still uncomfortable in my own skin and sexuality, I agreed.

"In a society that doesn’t shy away from blow job scenes, but rarely shows a woman receiving oral sex, it's easy to forget that women, too, have genitals they would like to have orally stimulated."

And so my feelings on the matter continued to be negative ones. In a society that doesn’t shy away from blow job scenes, even in mainstream movies, but rarely shows a woman receiving oral sex, it's easy to forget that women, too, have genitals they would like to have orally stimulated.

All through sex in my 20s, when a guy went down on me, my immediate feeling was that he felt obligated. The feeling, or rather the thought that followed, was that he was counting down the seconds as to how long he should stay down there just as much as I was counting the seconds to when he’d stop. If it seemed like it was too long (usually more than a couple minutes), I’d pull his head up and suggest we just get to the main course. If he persisted that he wanted to stay down there longer, ideally bringing me to climax, I'd tell him it would be impossible and that my interest in oral sex was pretty much null and void.

As is sometimes the case with certain sexual acts, I felt I was alone in this thinking. If men, for the most part, could enjoy receiving oral sex, why couldn’t I? When I was finally able to admit to my female friends that I didn’t like it, I realized I was definitely not alone. Not even by a long-shot.

"I never went down on a man out of obligation, so I needed to stop thinking they did, too."

During these flings, when the guy went down on me — and they always did — I threw myself into the moment. I didn’t let my thoughts get in the way and if they did, I reminded myself it wasn’t about obligation. If I could enjoy giving head, then these men could certainly enjoy giving it, too. I never went down on a man out of obligation, so I needed to stop thinking they did, too.

And so one night when I found myself on the receiving end of oral sex, relaxed, and having an orgasm, I was shocked. The war between my brain and body had ceased, at least for the moment, and my body had won. Finally.

In that last couple years that have followed, I have truly learned to let go and enjoy receiving oral sex. The likelihood of it ever being a favorite sexual act, of all the things one can do in bed, is slim to none, but at least now I can appreciate it for what it is and rise above a society that doesn’t give it the attention it deserves. Of course I’ll always have lapses, depending on my mood, where a partner will have to remind me that they’re doing it because they want to, but those moments are getting fewer and farther between.