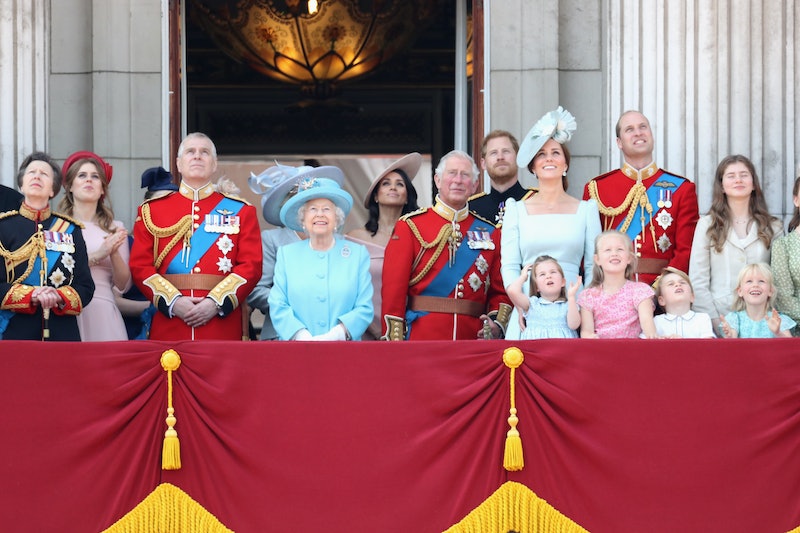 Ever since Prince Harry, Duke of Sussex, and Meghan Markle, Duchess of Sussex, welcomed their first child, a son, on May 6, 2019, the question of how Archie Harrison Mountbatten-Windsor fits into the royal family has been asked by many. It’s a question that can’t exactly be answered clearly and succinctly, especially now that Harry and Meghan have officially stepped down as senior royals. Plus, Archie is still just a wee babe. So much can still happen for him, including Meghan and Harry one day returning to the royal family.

There’s no doubt Archie will lead an exciting life, including one in the spotlight, just like his parents. Hopefully, he won’t face the constant backlash Harry and Meghan experienced that pushed them to step back from the British royal family. And, while he may be living in California for now, it’s important to note that just because Meghan and Harry will no longer receive public funding and won’t use their His/Her Royal Highness titles, this doesn’t change the royal line of succession. According to TODAY, Harry remains sixth in line, which also means Archie is still seventh in line. That said, Archie will most likely never see the throne, since he isn’t directly in like cousins Prince George, Princess Charlotte, and Prince Louis.

There's no way to know for certain what Archie’s life will look like or what his role will be, but it is possible to look at how life turned out for the children of other "spares" to the throne. Of course, we have to still keep in mind the massive popularity Harry has always had and how that's grown even more with Meghan by his side. That sets Archie apart from other royal children, at least for now. That said, here's a look at some other recent siblings of heirs' children and how their roles within the family and their level of celebrity turned out.

Queen Elizabeth II's younger sister, Princess Margaret, had two children with her husband Antony Armstrong-Jones: Lady Sarah Chatto and David Armstrong-Jones. Princess Margaret was very popular and was known as a party girl. But, while the spotlight was on her a lot, particularly when she was younger, her children, Sarah and David, aren't known as celebrities in the same way.

Like Archie, Lady Sarah Chatto was seventh in line to the throne at the time of her birth. Now, she's 24th. She had a very royal upbringing, growing up in Kensington Palace, according to Hello!, and she attends all sorts of royal family events, like Markle and Harry's wedding, for instance. But, her life isn't anywhere close to as publicized as some of her royal cousins. She had a pretty small wedding herself, has two sons, and is a professional painter.

Similarly, her brother, David Armstrong-Jones, 2nd Earl of Snowdon, was born fifth in line to the throne and is now 21st. He is a furniture maker, whose clients have included Elton John and Valentino Garavani, according to Town & Country. He is also married with two children.

If Archie follows in Sarah and David's footsteps, he could live a very royal life for a while, but in his adulthood will be able to have the career of his choosing and a more of a private life than his parents. Then, he can pop up at things like Prince George's wedding and everyone will be like, "Oh, look, there's Archie! How nice!"

Zara Tindall and Peter Phillips are Queen Elizabeth's only daughter Princess Anne's children. Similar to Markle and Harry's decision to not have Archie use a title, it's long been reported that Anne and her ex-husband Mark Phillips, turned down the use of titles for her children even though Queen Elizabeth offered to make them princes and princesses. "I’m very lucky that both my parents decided to not use the title and we grew up and did all the things that gave us the opportunity to do," Tindall told The Times in 2015 (via People).

For Tindall (sixth in line for the throne at her birth, now 18th), that meant becoming an Olympic equestrian and winning a silver medal at the 2012 games. She married former rugby player Mike Tindall in Scotland in 2011 and they have two young kids together.

As for Peter Phillips (fifth in the line of succession at his birth and now 15th), he has had some regular jobs and not just worked as part of the royal family like some of his cousins. According to Town & Country, he's worked for Jaguar, the Royal Bank of Scotland, and in sports management. He also has two kids, and is married to Autumn Phillips. They wed at St. George's Chapel like Harry and Markle.

Phillips and Tindall both are still very close with their family and show up at royal events often. But, they get to also have more private lives with their families and not live full-time as members of the royal family.

Princesses Beatrice and Eugenie are the daughters of Queen's Elizabeth's son Prince Andrew and Sarah Ferguson, aka Fergie. Fergie was popular when she married Andrew and remained a tabloid fixture after their divorce, which in part explains the interest in her daughters. There's also the fact that they were both princesses from birth — which, obviously, can draw attention to someone — because the title was passed down through their father. Beatrice and Eugenie are currently ninth and tenth in line for the throne, respectively.

Both women have been in the public eye quite a bit. Just last fall, Eugenie had a huge, televised royal wedding, and Beatrice's love life has consistently made headlines, too. While both sisters do some work for organizations as royals, they also have both held other jobs. Eugenie works for the art gallery Hauser & Wirth (on their site she's listed as "Eugenie York"). The Duke of York's website explains that Beatrice "works full time in business."

Following in Beatrice and Eugenie's footsteps would mean Archie might live a more public life as compared to the other examples given. On the one hand, this seems unlikely because Archie does not have a title and his parents have made it clear how important privacy is to them. But, on the other hand, Harry and Markle are so popular, that it might just depend on how long that popularity holds up and how much it's passed onto their son.

There's also the fact that the world is much different now than it was when Princess Anne's children were young, for instance, when it comes to how the media covers the royal family. Eugenie even has her own Instagram account. There could be more interest in Archie for longer just because there are more ways to follow him.

Of course, Harry and Meghan's decision to move to Los Angeles could change things. However, in the age of paparazzi and social media, it also might not change that much. Yes, it probably means that Archie won't be attending every royal function, but the odds are that he won't ever truly escape the spotlight. Whatever happens, as is always the case with royal watching, it'll be interesting to see how things shake out, even if it takes many years to find out.

More like this
Prince Harry Incorrectly Recites Christina Aguilera’s “Genie In A Bottle” Lyrics
By Jake Viswanath
Spencer Matthews’ Impressive Net Worth Expands Far Beyond Chelsea
By Sam Ramsden
Con O'Neill Was Connected With Sarah Lancashire Long Before 'Happy Valley'
By El Hunt
Twitter Can’t Get Over This One Part Of Lily Allen & David Harbour’s House
By El Hunt
Get Even More From Bustle — Sign Up For The Newsletter
From hair trends to relationship advice, our daily newsletter has everything you need to sound like a person who’s on TikTok, even if you aren’t.

This article was originally published on May 20, 2019