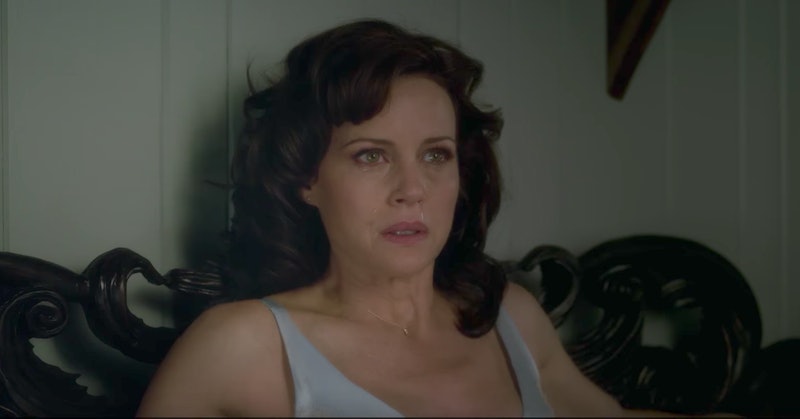 As 2017's most recent Stephen King adaptation, Gerald's Game is not for the faint of heart. The Netflix original from Hush and Oculus director Mike Flanagan is full of horrors, both psychological and gory in nature. So, if you're wondering how scary Gerald's Game is, the answer is: very. The movie, like most King stories, starts off innocently enough. In an attempt to save their marriage, Gerald (Bruce Greenwood) and Jessie (Carla Gugino) take a trip to a secluded cabin by the lake, but the romantic weekend quickly devolves into a nightmare when Gerald dies mid-sexytimes, leaving a nearly naked Jessie handcuffed to the bed with no way out.

Gerald's Game isn't your typical horror movie. There's no serial killer monster (à la It) and no running or screaming for her life. The biggest threat to Jessie, save for her impending death via dehydration, is actually herself. More specifically, the memories of past trauma that led her to this moment and haunt her whether she admits it or not. The cause of terror doesn't come from an outside physical threat, but from inside Jessie's own mind. "We wanted to scare people in different ways," Greenwood told The A.V. Club about the film's aversion to jump scares. "Disturb them in different ways."

Gerald's Game's specific brand of psychological horror revolves around the suffocating male gaze and the trauma of sexual abuse, something many women and men will be able to relate to watching the film. Anyone who has felt scared or threatened by a man should find the movie pretty scary in that regard, as the threatening male is embodied by Gerald in Jessie's imagination. The majority of the film takes place inside Jessie's head — hallucinations included — which allows for Gerald to become a symbol for all the male-induced horrors in her life. Not exactly as threatening as a villainous clown from another dimension, but still, pretty terrifying. "We made the decision that instead of just a crazy serial killer, corpse-eater bogeyman... that her whole journey was about dealing with the darker side of male gaze and male sexual impulse," Flanagan said in an interview with SYFY WIRE.

If psychological terrors don't particularly scare you, don't worry, Gerald's Game also features some more traditional horror genre staples. Gerald isn't the only creepy manifestation of the oppressive nature of men. There's also the Moonlight Man, the closest thing the film gets to a real monster, who offers up a few more traditional jump scares courtesy of his creepy, white, bald head and glowing eyes. A few other things, like a dog attack, offer up a few more shocking moments. But, by far the most traditional scare in Gerald's Game is what is known as the "degloving" scene.

The specifics of the degloving scene in Gerald's Game are better left unsaid (it's a major spoiler), but one doesn't necessarily need the details to understand just how traumatic and scary the sequence is. Any viewers particularly sensitive to gore, beware, this scene will haunt you. When the film premiered at Fantastic Fest, there were reports of audience members fainting and even becoming physically ill. And, if you think you can just close your eyes to block it out, you're wrong. A horror connoisseur, Flanagan has fully anticipated your self preservation techniques. As such, the sequence not only features graphic gore, it also has all the sound effects you can never un-hear cranked up to 11.

"It's some of the most uncomfortable noise and we just crank it right up," the director told Slash Film. "We just wanted to hear every little squish and pop and stretch. It's gnarly stuff."

So when asking how scary Gearld's Game really is, one must be prepared not to like the answer. If psychological scares are what terrify you the most, then it's scary. If you need jump scares and monsters to keep you up at night, then it's scary. And, finally, if the only thing that gets to you is gore and blood, well, Gerald's Game has that too. Enjoy your nightmares.