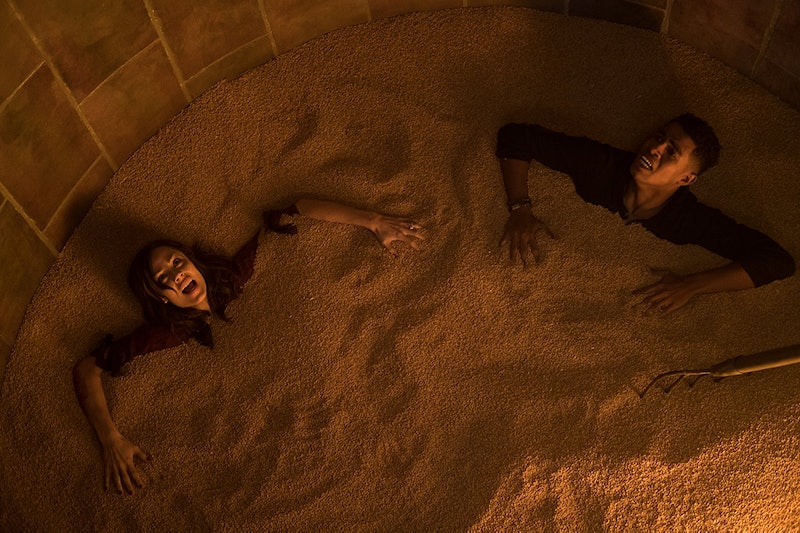 The Saw franchise was supposed to have come to a close with 2010's Saw 3D, but since Hollywood never leaves money on the table, the once-perennial horror franchise is back this Halloween for an eighth installment: Jigsaw. At first glance the film looks like it's going to be quite a bit different than its predecessors. It's the first Saw movie whose title doesn't start with "Saw," and it also looks to lend more of a murder mystery element to its storyline than the previous several installments. So with those differences in mind, how scary is Jigsaw?

While the film may be a bit of a reinvention as far as Saw movies go, at the end of the day we're still talking about another Saw movie. Horror films largely rely on the unknown and the art of surprise, and it's pretty hard to shock audiences into being scared when you're the eighth film in a franchise. You'd be hard-pressed to find anyone who thinks Halloween: Resurrection, Hellraiser: Hellworld, or Friday the 13th Part VIII: Jason Takes Manhattan are the scariest entries in their respected series. So with that in mind, it seems rather unlikely that Jigsaw will be able to match the scares seen in the first Saw movie — that is, if the first Saw movie scared you at all.

However, there's still one area where Jigsaw may have some potential for new scares, and that's in the teased return of the Jigsaw Killer. In the film, new Saw-style murders are being committed and the evidence points to John Kramer — who's been dead for ten years. If the film ends up going supernatural and featuring an undead John Kramer committing murders, then it could potentially be scary by offering viewers something they weren't expecting. Fans could show up for what they think is a typical Saw movie and end up getting a ghost movie, which would certainly mix things up. It's not confirmed that this is what happens in the film, but if it does go in this direction, then it would certainly add a new element to the franchise.

Whether John Kramer is really back or not, Jigsaw is still the eighth Saw movie. If you found the torture and gore of the previous seven films in the franchise scary, then you likely will be scared of this one, too. But if you were one of the many who don't really consider Saw movies to be particularly frightening, then you're probably not going to be too afraid of Jigsaw either.

More like this
These 25 International Horror Movies On Netflix Prove Fear Is A Universal Language
By Bustle Editors
14 Women To Watch This Oscar Season
By Marina Watts
An Extremely Messy Ranking Of What Actually Happens In 'Don't Worry Darling'
By Chloe Foussianes
Paul Mescal, Man Of Mystery
By Samantha Leach and Heather Hazzan
Get Even More From Bustle — Sign Up For The Newsletter