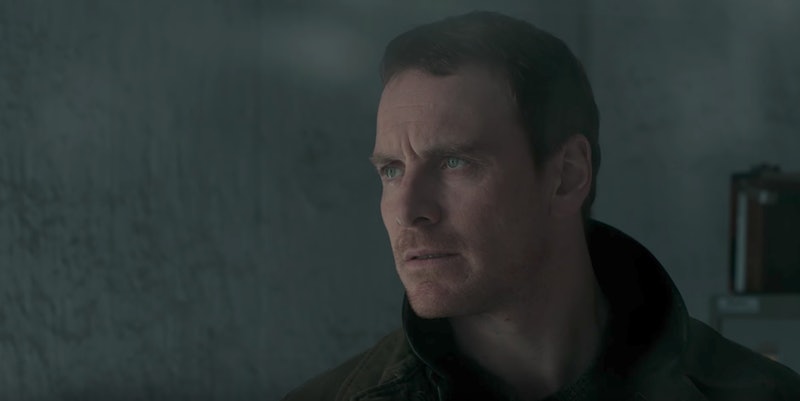 Dying for some made-up thrills to break up your true crime documentary marathons? There's a new movie to do just that, and it's called The Snowman. Whether or not this new thriller will send the same chill down your spine as creepy crimes IRL is up to you, as how scary The Snowman is in your mind depends on what exactly you find terrifying. If the popular Hollywood horror genre is the only thing that will get you to jump out of your seat, then The Snowman really isn't going to do it for you in the scare department. However, if slow-burning thrillers and serial killers give you nightmares, then you might have found your new favorite scary movie.

The Snowman stars Michael Fassbender as Detective Harry Hole, a grumpy alcoholic detective chasing after a serial killer known only as "The Snowman." The killer earned his nickname because of his flair for the dramatic: he kills women and builds snowmen near the scene of the crime (sometimes, he builds snowmen out of the dead bodies). It's a twisted tale of power, murder, and intrigue, made even more creepy by the Snowman's apparent obsession with Hole himself. Speaking to Digital Spy about the film, Fassbender teased that the movie would definitely inspire a few scares, calling it "edge-of-the-seat stuff."

Based on the beloved Norwegian novel by Jo Nesbø, The Snowman has a lot to live up to when it comes to delivering scares. As the seventh book in Nesbø's Harry Hole series, The Snowman has a legion of loyal fans already, which means the movie will have to come up with some new plot twists and anxiety-provoking situations to scare readers. Moreover, the film doesn't just have to compete with the scary imagery already in the book, it also has to compete with the horror of the reader's imagination. "You're filling in so many of the blanks with your imagination as a reader," Fassbender said in an interview with The Telegraph. "A lot of the time the description of the murders are more horrific and haunting because people's imaginations are much more vivid and scary and twisted than anything you could show on a screen."

Adapting a book like The Snowman is difficult, even for Tomas Alfredson, a director whose most famous films — Let the Right One In and Tinker Tailor Soldier Spy — were both based on novels. But, according to Rebecca Ferguson, who stars as Katrine Bratt, one of Hole's main coworkers in the film, it's a challenge Alfredson was more than up for. "Working with him, he can create the most boring scene to be the most intense scene," Ferguson told Collider of the director's ability to create suspense from behind the camera.

The Snowman might be full of twisted murders and suspense, but it wasn't all doom and gloom behind the scenes, rest assured that Fassbender and Ferguson were able to keep things light in between takes. "It was the same when we were doing 12 Years a Slave. Lupita [Nyong'o] and I would have a joke, laugh about something, and then go into these intense scenes," Fassbender told the Mercury News, referencing his off screen rapport with the co-star who played his character's slave in the Oscar-winning film. "Rebecca's very effusive and bubbly, and then — boom! — into what she's doing when we're doing it. It's easy and nice to have that."

No matter how jovial the vibe was on set, however, the finished product is pretty terrifying. "Frosty the Snowman" might have ensured that snowmen aren't viewed as particularly frightening, but instead of signifying a jolly magical spirit, the snowmen in The Snowman are signs that a woman was just brutally murdered. If that doesn't ruin your fun in the snow, nothing else will.