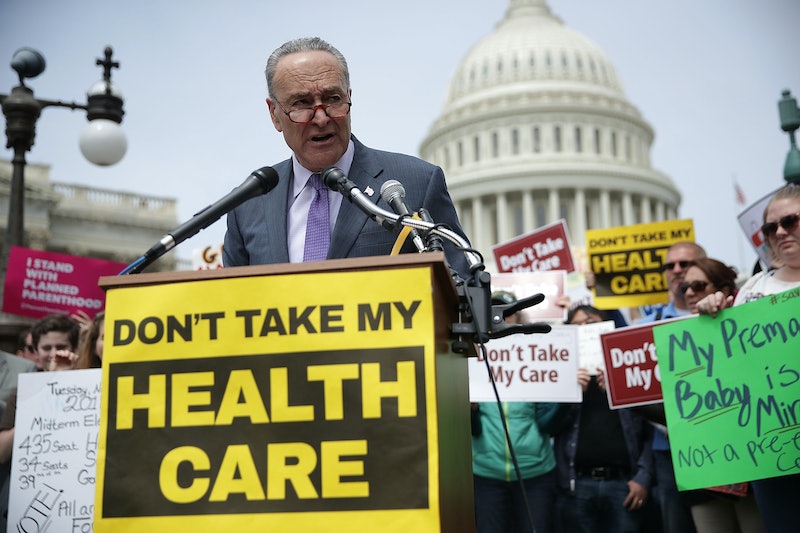 Despite the fact that the House of Representatives passed the American Health Care Act (AHCA) last week, the battle to save Obamacare is far from over on Capitol Hill. The AHCA, which aims to fulfill Republicans' campaign promises to "repeal and replace" Obamacare — more formally known as the Affordable Care Act (ACA) — would roll back many of the law's key provisions. One of the most talked about areas of the AHCA is in regards to what it would mean for the health care of rape and sexual assault survivors.

While the AHCA doesn't explicitly classify rape a pre-existing condition, the bill could "still have a devastating impact on sexual assault survivors," Sejal Singh, Policy and Advocacy Coordinator at Know Your IX, tells Bustle.

Under AHCA, being a rape victim would not constitute a pre-existing condition in the same way that, say, cancer would. As The Washington Post's Michelle Ye Hee Lee reported, "Almost all states (at least 45 to 48) have their own laws protecting survivors of domestic violence and sexual abuse. Even if AHCA became law as currently written, state law still determines what can and cannot be used for rating, according to the National Association of Insurance Commissioners."

However, there are a myriad of ways in which sexual assault can affect a victim, from mental health crises to sexually transmitted diseases. Many of those issues could be considered pre-existing conditions if the AHCA in its current form becomes law, according to sexual assault experts.

Prior to the ACA, people with pre-existing conditions (which include illnesses like diabetes, depression or cancer) could be charged significantly higher rates for insurance, placing coverage out of reach for many individuals. The ACA made it illegal for insurance providers to charge people with pre-existing conditions more for their insurance. Under the AHCA, however, states will be allowed to apply to waive that rule.

The resulting increase in insurance costs could be substantial. The Center for American Progress (CAP) estimates that pregnancy alone could cause a patient's premiums to rise by an additional $17,000. For Americans who cannot afford an increase that large, AHCA could potentially impede their health care.

Pregnancy, of course, is one of many possible side effects of sexual assault, as are sexually transmitted diseases and mental illness. Many of these effects would count as pre-existing conditions under AHCA, even if an assault itself would not. "Survivors respond to sexual violence in different ways, but many experience devastating effects on their mental health," Know Your IX activist and assault survivor Nastia Gorodilova tells Bustle. "Some struggle with depression, anxiety, and PTSD; others experience substance abuse, social withdrawal, or engage in self-harm."

"Because of this legislation that threatens my right to healthcare, I have to now question my decision to seek help and speak openly about my own sexual assault, which is painful and invalidating."

Under AHCA, states may permit insurance providers to charge people more if they suffer from mental illness; this could place medical treatment and therapy out of reach for many of the people, including rape survivors, who need it most, according to sexual assault health care specialists.

Sometimes the mere appearance of assault-related treatment on a patient's medical record can cause problems. When Christina Turner received medical care after she was raped in 2010, her doctor prescribed her a course of anti-HIV medication. When insurers saw the medication on Turner's record, they refused to cover her — even though she never actually contracted HIV.

The AHCA would still prevent insurers from denying service to people with pre-existing conditions, but Singh says there are still causes for concern. "By allowing insurers to dramatically raise prices, all while cutting insurance subsidies, it would make insurance unaffordable to many people, effectively doing the same thing," Singh says.

Increasing premiums for assault victims who are coping with the side effects of being attacked effectively blames them for being assaulted, according to Gorodilova. They say the AHCA "sends a clear message to us that we must bear the cost of the violence that was inflicted upon us, which in turn communicates that it was our fault that we were assaulted."

The law might even deter rape survivors from reporting the attack or seeking treatment, some experts say. "Many victims are concerned about billing and health insurance coverage, particularly around the confidentiality of treatment. If this information is being used as part of an assessment for future coverage, yes, this will deter victims from coming forward," wrote Megan Blomquist, Director of Education & Training, and Sarah Layden, Director of Advocacy, at Rape Victims Advocates in a joint email response to Bustle.

Even without classifying rape itself as a pre-existing condition, AHCA is still intimidating and worrying to survivors of sexual assault. And for many sexual assault activists, it's already affecting them at a deeply personal — even before it has become law. As Gorodilova shares, "Because of this legislation that threatens my right to healthcare, I have to now question my decision to seek help and speak openly about my own sexual assault, which is painful and invalidating."

More like this
24 History-Making Black Women You Probably Didn't Learn About In School
By Ayana Lage and JR Thorpe
25 Inspiring Quotes From Black Women To Celebrate Black History Month
By Kyli Rodriguez-Cayro and JR Thorpe
6 Organizations Fighting Police Brutality That You Can Support Right Now
By Syeda Khaula Saad and JR Thorpe
Any Of These 45 Cheap Things Could Make You Look So Much Better
By Mackenzie Edwards
Get Even More From Bustle — Sign Up For The Newsletter
From hair trends to relationship advice, our daily newsletter has everything you need to sound like a person who’s on TikTok, even if you aren’t.