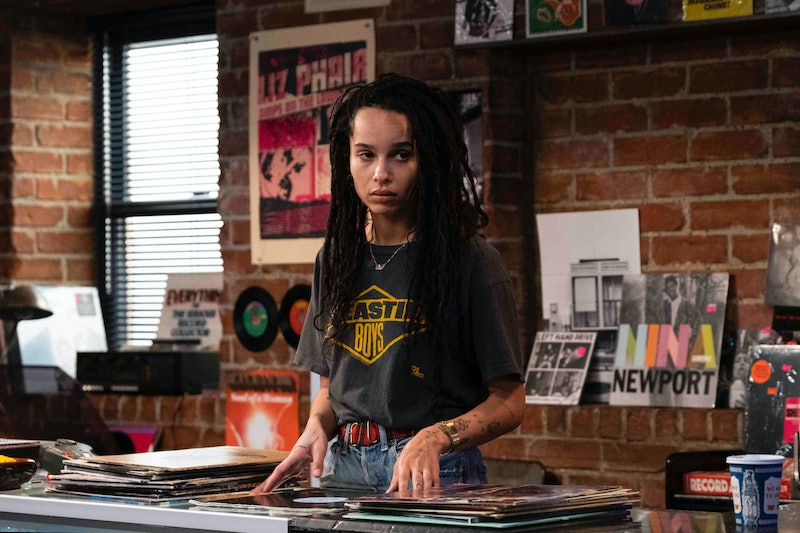 No one is ever truly ready to run into an ex on the street. But if it's going to happen, one can only hope they look as effortlessly cool as Zoë Kravitz's Rob does in Hulu's High Fidelity. When she comes face-to-face with the man who smashed her heart to pieces, she's wearing a silky red Hawaiian shirt tucked into frayed blue jeans and a pair of chunky patent leather boots. Her headphones are still playing music — Nick Drake's "Pink Moon" — and and the cord is tangled around her hair, revealing an eclectic stack of gold earrings and a nameplate necklace. She looks like a cross between a street style star you’d see smoking a cigarette outside of Paris Fashion Week and a dad on a tropical cruise. Her unique aesthetic feel less like a costume for a character and more like sartorial creativity, idealized.

That's all thanks to High Fidelity costume designer Sarah Laux. To create Rob's eclectic yet elevated looks, she scoured thrift stores and vintage markets, aiming for a mix of textures and colors that captured the spirit of the '90s and paid homage to the frenetic energy of New York. The show follows record shop owner Rob, who's mourning the end of her relationship with her great love, Mac (Kingsley Ben-Adir). She decides to search for answers in the most chaotic way possible: by tearing open old wounds from other past relationships. And if you're wondering how she feels at any given moment, her wardrobe is a great place to find clues.

Rob is decidedly analog in a digital world, and Laux wanted to embrace that by peppering her fashion with personal touches and idiosyncrasies, assisting Oscar-winning costume designer Colleen Atwood on the pilot and then taking the lead on the rest of the series. "If it ever started feeling like Rob’s clothing was too cute or too perfect, we would choose one thing to keep and find a way to fuck it up," she tells Bustle. "She is kind of falling apart, and we didn’t want her to look too put together." The sadder Rob is, the more layers she wears: think big pants, a huge t-shirt she slept in the night before, topped off with a smothering sweater.

All the looks, even the depression looks, take cues from some of the '90s greats. Laux took fashion inspiration from icons like Winona Ryder, Fiona Apple, Jeff Buckley, and even Kravitz's mother Lisa Bonet, who starred in the original film. The silhouettes are nostalgic, but never caricatured — there's a striped green sweater eerily reminiscent of one famously worn by Nirvana’s Kurt Cobain, and a tiny cheerleader skirt that conjures up the image of a young Liv Tyler dancing in Empire Records.

One of the most interesting styling choices appears in flashbacks showing Rob and Mac in the throes of domestic bliss. Rob dresses like a different person, wrapped in sweet patterned mini dresses from the '50s and colorful prints. "This is a version of Rob we haven't seen," says Laux. "She is open and warm and blooming like a flower in love." There's no layering in sight.

In the present day, Rob's staple pieces remain the same: Hawaiian shirts, graphic tees, and her perfect purple-lined leather jacket. “John Cusack wears a similar leather jacket in the film, and it gives us a touchstone of the time period that the book was written in,” Laux notes. “Everything comes around again. Even that sort of not-cool thing can become cool on the right person.”

The jacket operates as a soft armor for Rob, emboldening her in the way only a truly perfect piece of clothing can. It's the kind of wardrobe staple that might not be the most expensive or sensible item, but is worn constantly out of comfort. “I always say we’re going to fit until we feel feelings,” Laux adds.

Designing clothes for a character who doesn't really think about them can be tricky. Rob is a different kind of New York icon than a Carrie Bradshaw or a Blair Waldorf: her appeal comes from her disinterest in the idea of shopping in the traditional sense. She's never overtly trying, yet she still looks cool.

When Rob finally comes face-to-face with Mac’s new fiancée, she sips whiskey and chats politely with the woman who has essentially stolen the love of her life. Her tattoos peek out of the sleeves of the Boy Scout uniform-turned shirt she's wearing paired with yellow velour sweatpants. Similar to the outfit from her first unexpected run-in with Mac, this all looks inexplicably amazing on her. In the middle of an awkward pause, Lily (Dana Drori) leans over with an olive branch: “I love your shirt, by the way.” A pause. “Thanks, I love your sweater,” Rob replies. Lily laughs and rolls her eyes, knowing that only one of them really meant it.