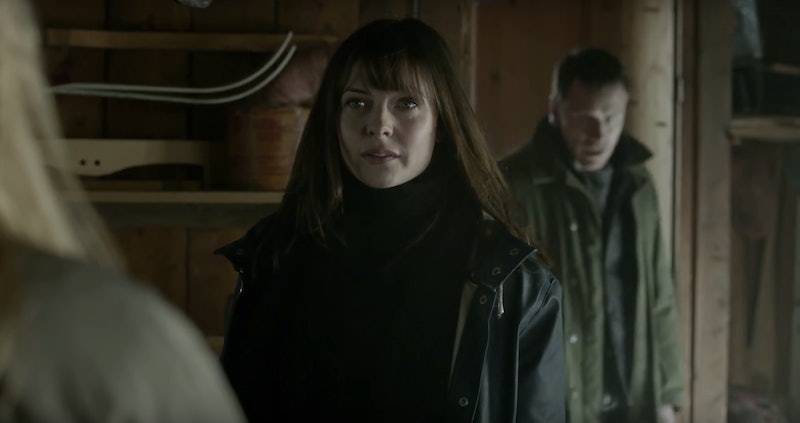 One would be forgiven for thinking that The Snowman is all about drunk Detective Harry Hole (Michael Fassbender) and his desperate chase of a serial killer known as The Snowman. But really, at its core, the movie is about a detective who saves the woman he loves from a killer who's desperate to control women. It's basically a classic white savior narrative, but instead of being about a white man saving people of color (of which there are none in The Snowman), it's about a white man saving women. And despite Harry being helped along by a capable female detective, Katrine Bratt (Rebecca Ferguson), in the end, it is he who gets to save the day, not her. With this, The Snowman takes away a feminist victory from its lead female character, unfairly giving it to the man instead.

Spoilers ahead! The Snowman's main driving force is to punish women. Over the course of the film, it's revealed that the villain kills women who either have children with unknown fathers or have decided to get abortions. Every woman he kills in the movie is a working mother, and all of them are sexually active, with children or pregnancies from unknown fatherhood. This angers the killer because, as explained at the beginning of the film, his mother was a single mom who lied to him about his abusive "Uncle Jonah," who was really his father, but was married to another woman. The Snowman's mother committed suicide in front of him, and he blames her for being unwanted by his dad.

It's pretty much textbook patriarchy: the killer is driven mad because he hates that his mother didn't fulfill his ideal of womanhood, and sees her somehow as having asked to be abused physically and mentally by his biological father. The Snowman featuring a serial killer who's driven by toxic masculinity is a well-meaning attempt at making the audience aware that strict ideas of gender roles are not healthy. Obviously, no audience member is meant to identify with the killer, so in a way, the film has a feminist theme. This allusion to female empowerment is made clear by one of the Snowman's victims, who, after getting an abortion, is heard telling her lover, "It wasn't your child, it was mine." However, all those good intentions are undermined by two very important themes and plot points in the film — the violence against women and the truly frustrating ending.

The Snowman both vilifies and delights in violence against women. Since the movie is a thriller, one could argue that seeing Sylvia Ottersen (Chloë Sevigny) get her head severed from her body is necessary to the plot. But, the violence against women isn't just limited to the Snowman killer. It's embodied by suspect Arve Stop (J.K. Simmons), who has a habit of hiring young escorts and taking photos of them on his personal cell phone. And, most disturbingly, it's also found in Harry Hole himself. In one crucial scene, Harry lies on top of Katrine in an attempt to subdue her after she attacks him for breaking into her home. She yells at him to "get off," but he doesn't budge. It's an uncomfortable moment, made only worse by the fact that Harry then dismisses Katrine's thoughts on the Snowman case and leaves her alone. It's the last time he sees her alive, which brings us to the most egregious crime committed by The Snowman: letting Harry get all the glory.

It is Harry, not Katrine, who gets to call out the Snowman's misogyny, despite it being Katrine who first identifies the Snowman's hatred of women as the cause for the murders. Before the end of the film, Katrine herself falls victim to the Snowman, who uses her dead body to taunt Harry. It's incredibly disappointing and unsatisfying to see the closest thing the film has to a female protagonist get robbed of any kind of victory. It's a cruel fate for Katrine, made even more so by Harry's final showdown with the Snowman. In this battle, Harry tells the Snowman that he was wrong about his parents. It wasn't his mother's sexual decisions that made his life terrible, it was the fact that his father saw him as an inconvenience.

The fact that Harry, not Katrine, is the one to confront the Snowman about his sexism is deeply disappointing. It's not because men can't be feminist allies, but because it feels extremely disingenuous. Until this point in the film, Harry has never shown particular regard or sympathy for the Snowman's victims or Katrine's struggles. It also rings very false to have the final moment of triumph be one in which Harry enlightens the Snowman on sexism, while the movie itself kills off its most interesting character for absolutely no reason.

In 2017, it shouldn't be too much to ask that an audience would get to see a woman confront misogyny on screen in a movie like The Snowman, or that violence against women would not be a frequent occurrence unnecessarily. It's a shame the movie didn't take Katrine and its overall feminism all the way to the end, as both the film and the audience would have been better for it.