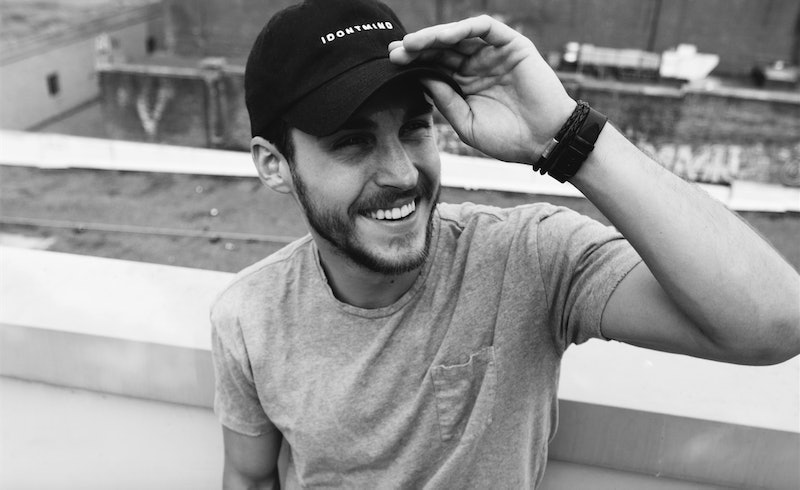 Mon-El might still be finding his way as a hero on Supergirl, but the actor who plays him is set on a path towards helping others and affecting positive change. During Mental Health Awareness week this year, Chris Wood launched the IDONTMIND campaign to raise money and awareness and to work towards tearing down the stigma surrounding mental wellness. We are all connected to this cause in some way, and speaking over the phone with Bustle, Wood explains why these minimalist shirts and hats aren't just wearble, but a great way to start a conversation that actually saves lives.

Getting people to talk about their own and others' mental health can seem like a monumental task. "It's such a difficult thing to change the way an entire population views something," Wood says. While there are plenty of advocates out there and groups and individuals who are fighting, "there is a tendency to shy away from honesty when it comes to our mental wellness," he says.

It's surprising to me how often that's the response. 'Yeah, me too. How can I help?'

A few years ago, Wood's father died of heart failure after undiagnosed mental disorders caused him too much physical strain, even though he was on the road to recovery at the time, according to a 2016 interview Wood gave to the site, Future of Personal Health. “There weren’t any signs that I saw, or that my family saw, in my father,” he said. “By all accounts, he was fine. But that doesn’t mean there wasn’t something going on beneath it all that we didn’t know about — that he didn’t talk about.”

Personal examples like this should be proof enough that mental health is just as life-threatening and important as any other kind of injury or disease, and yet it so often takes a back burner in conversations about wellness.

"Statistically," says Wood, "one in five people have some form of metal illness — and another very sad statistic is that 90 percent of those who have died by suicide had some form of a mental illness." Those statistics and more that may surprise you can be found on the National Alliance on Mental Illness website.

This tee shirt and hat campaign — and Wood specifies multiple times that this is just the first campaign planned for IDONTMIND and not the endgame — is donating all proceeds to the National Alliance on Mental Illness. Also known as NAMI, they provide crisis help lines and text assistance, help push public policy through, and have programs focused on youth.

"The majority of people who don't seek help and get the treatment they need," Wood explains, "the common thread behind why they're not seeking help is fear and shame. So stigma is a very practical barrier. It's a very visceral thing for people who are struggling and not getting the help they need. It creates more sadness for loved ones and for those who are already struggling."

However, often times with social stigmas surrounding issues such as mental wellness, just opening that door is enough. People want to talk about it.

That was the case certainly with Wood's Supergirl coworkers. "When you're shooting a show you become pretty close inevitably because of the long hours," Wood says, "and being trapped in small rooms with a limited group of people. So you become this sort of, have an element of family in your cast." When they learned about what he was doing with IDONTMIND and his connection to the issue (if they weren't already aware), his coworkers were immediately on board.

"Everyone's response," he says, "is 'yeah, I'm connected to this cause too. How can I help?' It's really astounding to me and it's surprising to me how often that's the response. 'Yeah, me too. How can I help?'" The only conflict, he laughs, was finding time in their shooting schedule to take pictures that now appear on their own and the campaign's social media.

Coming up with a minimalist design was essential, too. Wood explains that they needed a phrase that was approachable, "with the intention of inviting conversation instead of inviting criticism." Language is key.

"If you were to give a bunch of kids shirts that say 'Mental Health Is Cool,'" he says, "and 'Stigma's The Worst,' they're just gonna get bullied — and if they're struggling, they're just gonna be faced with more adversity." This approach, he hopes, opens up a conversation. "It gives [you] the opportunity to say something without yelling it," Wood says. He worked with Creative Director Edward Schmit to produce shirts in three different colors, as well as baseball hats. Each product is 25 dollars and only available until Oct. 14.

As with his fellow actors, Wood has also gotten positive feedback from fans. "Once I started being vocal about mental wellness and how vital that is," he says, "I often find the things that [fans] share with me is something about how mental health has affected them, and what they've struggled with. It's those little moments that you hear that something that you've been speaking about has actually changed another person and actually given them hope."

Besides in funding dollars, change can often be hard to track, but chipping away at a problem actually works. According to NAMI, ending the silence matters not only because only 20 percent of those with mental illnesses seek help, but early identification and diagnosis can make all of the difference.

"It's very difficult, I find, to realize the benefits of what you're doing," Wood says. "This is a beautiful thing when you have an actual exchange with someone who says 'Hey, I heard what you said and it actually helped me.' In the moments when I've been at my lowest, that's what's gotten me through."

More like this
On 'The Handmaid’s Tale,' Christine Ko Fights Back
By Gretchen Smail
There’s A Brand New 'Drag Race' Spin-Off In The Works
By Sam Ramsden
Mike Flanagan Teases 'The Midnight Club' In This Exclusive, Creepy Clip
By Grace Wehniainen
Lauren Lyle Is Keeping The Contents Of Karen Pirie’s Bum Bag A Mystery
By El Hunt
Get Even More From Bustle — Sign Up For The Newsletter