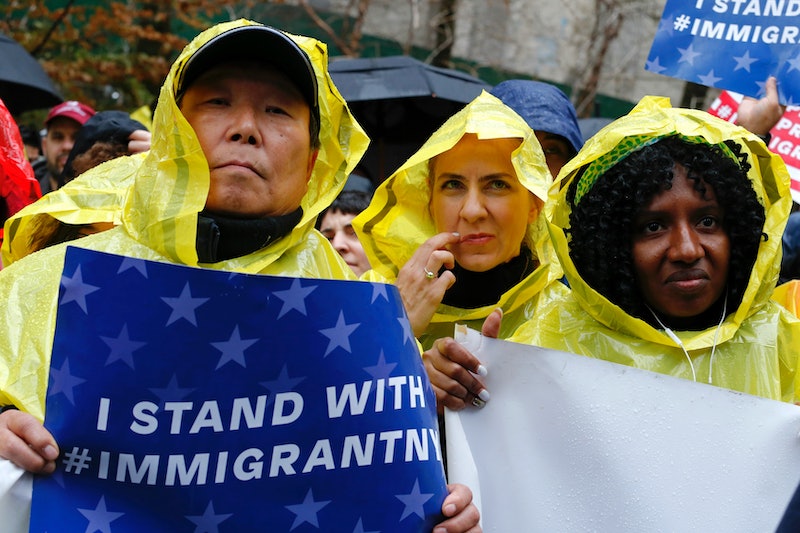 Among the myriad dangerous and regressive actions Donald Trump has taken in his first few days in office, the newly reintroduced Muslim travel ban is close to the worst. Throughout the campaign, Trump flip-flopped on this issue countless times, but the first iteration of Muslim-targeted immigration reform is likely to be signed into law Wednesday via executive action. Organizers are already planning protests in response to the announcement, so here's how to find a refugee ban protest near you.

If you live in the New York City area, CAIR-New York is holding an emergency rally Wednesday night in Washington Square Park at 5 p.m. While the protest is aimed at protecting all immigrants' rights, it was planned in direct response to the announcement from Trump's administration that a travel ban was forthcoming. Under the ban, all people, including refugees, will be banned from entering the United States from the following seven countries: Iran, Iraq, Libya, Somalia, Sudan, Syria, and Yemen. Anyone with a visa from those places will be unable to enter or reenter the country, even if they have no history of violence or connection to terrorism, so you can probably see why people would want to protest.

You might have a more difficult time finding organized protests in smaller or less Muslim-concentrated areas, but you can always plan your own. Start by contacting any local mosques or Muslim community centers nearby to see if they have anything planned, and if not, offer to coordinate with them. When advertising, word of mouth is one of the most effective ways to get people involved. Social media pages or postings can be helpful for informing people, but getting your friends and family to tell their friends and family most effectively networks and engages the community. Protest activity is constitutionally protected in public forums like parks, sidewalks, and streets, so even if you are arrested for protesting you can't be charged with a crime. Be sure to read up on more tips for protesting safely just in case you do have an interaction with either police or counter-protesters.

The "emergency" of the rally isn't an overstatement — this is a gross oversimplification of foreign policy that will legitimize and contribute to hate crimes against Muslims, which have spiked in recent years. Preventing millions of people from entering the country just because of their background isn't the liberty that America was founded upon, and as a nation, people have to overcome their impulses toward fear and isolationism. Muslims deserve the same protections and access in this country as everyone else, no matter what some people claiming to follow their religion do.