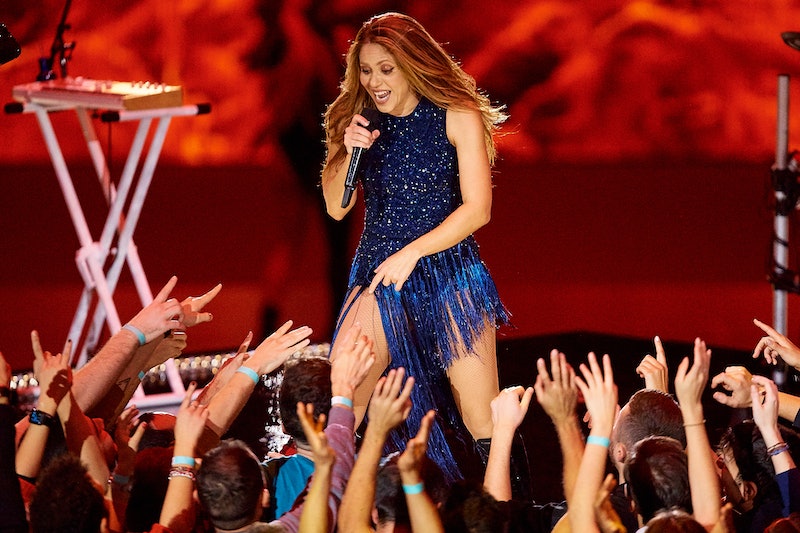 If you're only interested in watching the Super Bowl for its halftime show, you're going to want to know how to stream it — especially considering this year's lineup includes the epic duo of Jennifer Lopez and Shakira. The actual game begins airing on Fox on Feb. 2 at 6:30 p.m. ET, which means the halftime show should kick off somewhere between 8 p.m. ET and 8:15pm ET. If you don't have a cable subscription, you're in luck: for the first time, Fox is allowing viewers to stream the Super Bowl for free directly from the Fox Sports App or FOXSports.com.

The Fox app itself is compatible with a range of devices, meaning you can stream it directly to your TV via AppleTV, Roku, Chromecast, FireTV, XBox, or AndroidTV. To create a profile and get set up, simply navigate to the Fox Super Bowl page and click "Get Started."

If you don't want to go through the Fox app, you can also try third party platforms that have a live TV component, such as Hulu with Live TV, YouTube TV, or Fubo TV. If you're not already subscribed to these services, they cost between $45 to $55 a month, but SlingTV also offers Fox and is about $25 a month. AT&T TV Now is another streaming service that includes Fox, but it's the most expensive at $65 a month.

If you don't have any interest in watching the half time show live but want to see it eventually, the performance is usually uploaded the same day to the official NFL YouTube page.

Whichever way you choose to watch, you'll definitely want to tune in somehow — the Super Bowl LIV marks the first time JLo has ever performed at the halftime show. "Ever since I saw Diana Ross fly off into the sky at the halftime show, I dreamed of performing at the Super Bowl," Lopez said in a statement to the NFL. "And now it's made even more special not only because it's the NFL's 100th anniversary, but also because I am performing with a fellow Latina. I can't wait to show what us girls can do on the world's biggest stage."

Shakira agreed, adding that she's "honored to be taking on one of the world's biggest stages in the company of a fellow female artist to represent Latinos and Latinas from the U.S. and all over the world."

And to top it all of, it's Shakira's birthday: "This is a true American dream and we are going to bring the show of a lifetime!"

More like this
Twitter Is Freaking Out Over Rihanna’s 2023 Super Bowl Halftime Show Announcement
By Stephanie Topacio Long
TV Schedules Undergo Major Changes For The Queen's Funeral
By Sam Ramsden
Everything To Know About Taylor Swift’s 10th Studio Album, 'Midnights'
By Grace Wehniainen and Jake Viswanath
Jason Derulo Is Launching A New Singing Show In The UK
By Maxine Harrison
Get Even More From Bustle — Sign Up For The Newsletter