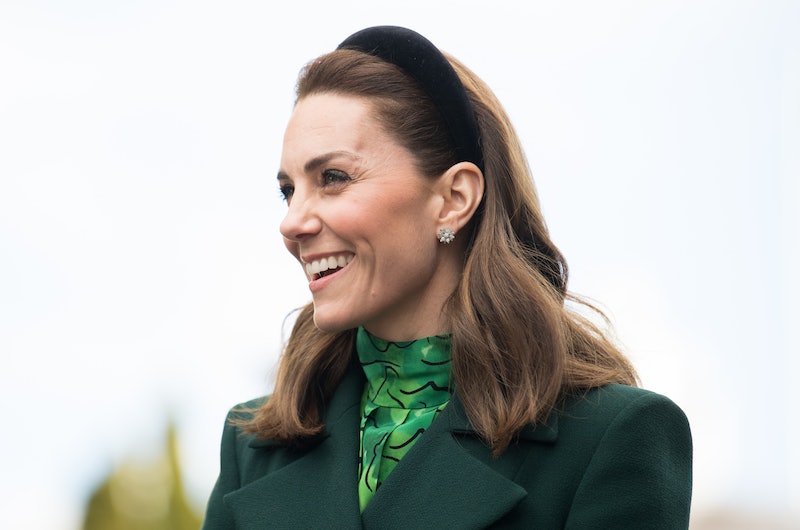 Is it a hat? Is it a headband? Or a hatband hybrid? Regardless of where it sits, royal watchers will recognise it as Kate Middleton's go-to headgear. She first debuted the style at Prince Louis’s christening in July 2018, and then the hair accessory then swept the Spring/Summer 2019 runways, from Prada to Givenchy, and even Chanel. Since, it has become a mainstay in Middleton’s wardrobe, and we can’t get enough of the Duchess of Cambridge’s now-signature headband.

Middleton’s choice of hair accessories could also be a nod to her late mother-in-law. The late Diana, Princess of Wales, was known to wear headbands throughout the '80s and '90s, and the Duchess has followed in her sartorial footsteps many times before. But with this accessory, she's paving her own sartorial way.

Her first "hatband" was a rather intricate incarnation, but the embellished Jane Taylor headband offset her minimalist Alexander McQueen dress perfectly. More in the "hat" category than the "headband", royal style expert Elizabeth Holmes defines the headband as "a substantial headband, which can also be worn for occasions that would otherwise require a hat. The key differentiator here is not necessarily the width but the height. There has to be some volume involved."

Since the christening, the Duchess has experimented with new colours and textures. (Autumn 2018 was big for Middleton's accessories repertoire.) Notable examples include the blue, floral Juliette Botterill design worn with a Catherine Walker dress coat to attend Sophie Carter and Robert Snuggs’ wedding in September the same year, and the pleated Jane Taylor band paired with her Catherine Walker coat for the her first appearance of 2019 at the New Year’s service at Sandringham.

More recently, the Duchess has stepped out in another of the designer’s velvet hairbands, paired with a green Alessandra Rich dress during the recent royal visit to Ireland. As Kate Middleton continues to champion the trend, here are the best tips for how to wear a headband in true Duchess style.