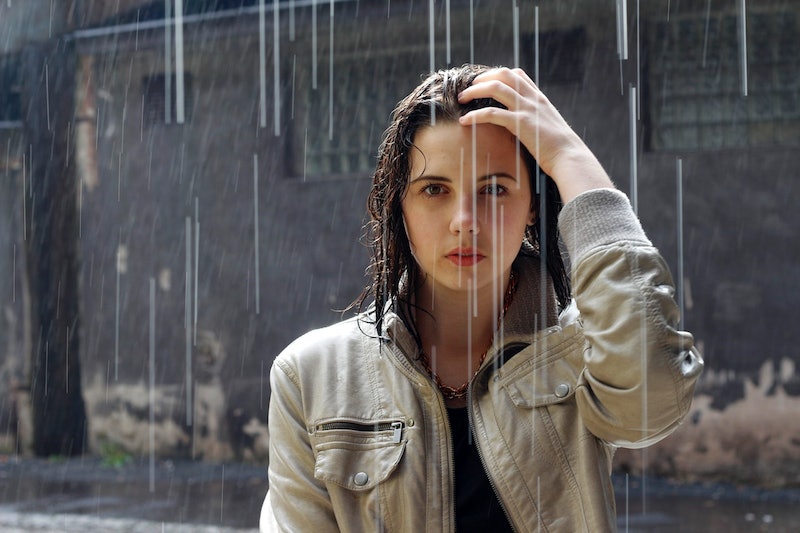 If you've always felt like your name really doesn't suit you, it might be because your parents gave you the wrong name. Oops. While some parents wait to meet their baby before choosing a name, others have it picked out before their child is born. And, now, a new study published in the Psychonomic Bulletin & Review reports that being given a name that doesn't match your facial features can have lifelong social consequences.

The study by Professor Jamin Halberstadt of the University of Otago’s Department of Psychology, and then Ph.D. candidate David Barton, "found people tend to associate round names such as 'Bob' and 'Lou' with round-faced individuals, and they have an inherent preference for names and faces that go well together."

Focusing on the Bouba-Kiki effect, people’s tendency to associate rounded objects with names that require rounding of the mouth to pronounce, the study found that people whose names and faces match are more likely to be popular and successful.

"The fact that extreme name-face congruency predicted the proportion of votes that American senators received illustrates just one practical implication of this work,” Professor Halberstadt told the University of Otago News.

The brain is a tricky thing. While you think you're totally in control of your own decisions, your subconscious is often determining how you will behave and react without your knowledge.

Breaking Down The Bouba-Kiki Effect

Psychologists developed the Bouba-Kiki effect to better understand the evolution of language, and whether the first sounds made by humans were arbitrary and random, or whether people consistently applied them to certain symbols, concepts, and shapes, according to the Scientific American.

"In this effect, people are shown a pointy picture or a curvy, bubbly shape and asked to identify it as 'Bouba' or 'Kiki,' even though those are both nonsense words," the Scientific American explained. "They are asked to do the same with a pointy, sharper shape. A surprising number of people identify the round shape as 'Bouba' and the pointy shape as 'Kiki' although they have not been told what the words mean."

"The results go beyond the idea that people judge others based on superficial features like their names," Professor Halberstadt told the University of Otago News. "They also judge others based on how well the features fit together. In this case, the fit is between people’s names and their faces; people with angular faces but rounded names, or vice versa, tend to be disliked."

People Like You More If Your Face & Name Match

Let's take former President Bill Clinton, a man with a round face whose name matches his features. Despite numerous sex scandals and political gaffes during the election, and throughout his presidency, Clinton is a man an overwhelming number of people have fond feelings for.

While he is undeniably charismatic, would he be as popular with a name like Lyle? Barton and Halberstadt were curious about this, too, and the pair predicted that a proper face-name match could give politicians an advantage at the polls.

"The researchers computed matching scores for 158 candidates for the United States Senate, based on independent ratings of the roundness of each candidate’s face and name," the University of Otago News reported. "They found that well-named candidates (whose faces matched their names) had an advantage. Candidates earned on average 10 more percentage points in their elections when their names fitted their faces very well, versus very poorly."

This makes a pretty good case for waiting to meet a child before slapping them with a family name like Ethel in utero when they actually have the round features of a Beyoncé. And, what if Beyoncé were named Ethel? Would people willingly bow down at the church of Ethel? This, my friendlies, is why many celebs change their names.

Is Your Name The Secret To Success?

Have you ever heard of Caryn Johnson, Amanda Rogers, Peter Hernandez, Elizabeth Woolridge Grant, or Robert Ritchie? No? That's because you likely know these people as Whoopi Goldberg, Portia de Rossi, Bruno Mars, Lana Del Rey, and Kid Rock. In particular, according to the study, Robert is the absolute wrong name for someone with an angular face like Kid Rock.

If you're parents did indeed give you the wrong name, now you have one more thing to blame them for. And, now that you know about the Bouba-Kiki effect you can make the right decision for your own children, should you choose to have them.

Many people with a name that just doesn't seem to fit them end up going by a middle name or a nickname. But, if you're planning to run for office, or you're trying to launch your music or acting career, having a name that matches your face clearly gives you a distinct advantage. So, if the name Reginald Dwight isn't getting you anywhere, consider something more fitting, like Elton John. Because, no one is going to shell out hundreds of dollars to see Reginald Dwight perform.

"People’s names, like shape names, are not entirely arbitrary labels," Professor Halberstadt explained. "Face shapes produce expectations about the names that should denote them, and violations of those expectations carry affective implications, which in turn feed into more complex social judgments, including voting decisions."

More like this
This Psychological Effect Might Be Keeping You From Hitting Your Goals
By Lexi Inks
Black Women's Equal Pay Day Highlights An Upsetting Problem
By Brandi Neal
The Spiritual Meaning Of Angel Number 000, Explained
By Kristine Fellizar
10 Ways To Be More Empathetic To Your Partner
By Raven Ishak and Lexi Inks
Get Even More From Bustle — Sign Up For The Newsletter