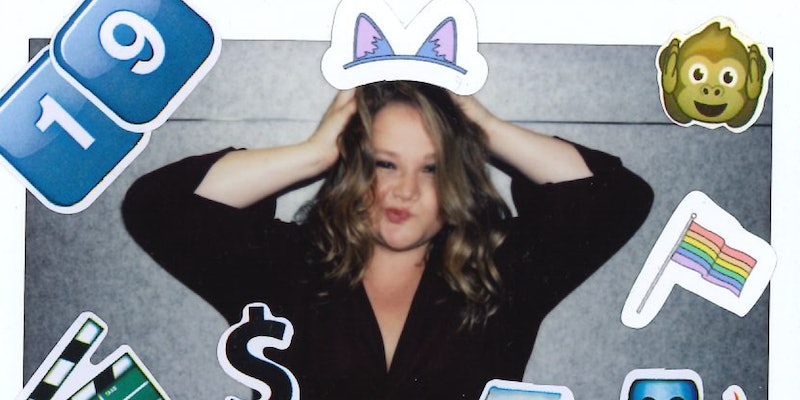 When celebrities hang out with Bustle editors, we want to give them the chance to leave their mark. Literally. So we hand them a pen, a piece of paper, a few questions, and ask them to get creative. The rest is up to them. This time, Patti Cake$ star Danielle Macdonald is leaving her mark in the Bustle Booth.

Danielle Macdonald is one of the latest young actors to snag a spot on the list of up and comers to watch in Hollywood. Her first major starring role, playing Patti in the indie darling Patti Cake$, put her on the map in a major way, and she's not going anywhere. Macdonald, originally from Australia, has been hustling in La La Land for years, first landing bit parts in television shows including Glee (as "Girl #1), Pretty Little Liars (as Cathy), and even American Horror Story (as Bristol Windows). But it's her breakout role as an aspiring New Jersey rapper in Patti Cake$ that's pushed the 26-year-old from background player to bonafide star.

But, don't let her new stardom fool you. At the risk of sounding cliché, MacDonald is really just like us. Don't believe me? During her stop in the Bustle Booth, Macdonald spilled tea on her go-to coffee order — an iced latte — and her fav "chick flick" is How To Lose A Guy in 10 Days. So, as it turns out, she's relatable, and she has great taste.

MacDonald's Bustle Booth answers also paint the picture of a young star dedicated to making Hollywood a more representative space, specifically for women. When asked to name her celebrity idol, she crossed out "celeb" and wrote, "Anyone/everyone who stands up for human rights & equality." And when asked about female directors, she told Bustle that they were necessary because "we have voices. We aren't stereotypes."

Given the importance Macdonald places on female directors, it's not surprising that her next project, which she teased via doodle, is a completely female driven production. The actor's new movie, which she described as two women, hearts, and Dolly Parton, is Dumplin'. Based on the YA hit by Julie Murphy, Dumplin' not only boasts a female director, Anne Fletcher (The Proposal, Step Up), it also has a female screenwriter, Kristin Hahn, and a handful of female producers — including Hahn and Jennifer Aniston.

In the film, Macdonald plays Willowdean Dickson, a plus-sized teenager who signs up for the local beauty pageant to spite her beauty queen mother, played by Aniston. It's a journey of self acceptance and confidence, a mother-daughter drama, and a Dolly Parton homage all in one (Willowdean is a huge Dolly fan). It's the kind of movie Macdonald wishes had been in theaters when she was a teenager. "I would have wanted to see this movie made when I was a teenager growing up," she told W Magazine. "That would have been really cathartic."

Dumplin' is a big shift from Patti Cake$, taking the actor form New Jersey to Texas, but also taking her from a role that doesn't revolve around her weight (Patti) to one that does (Willowdean). It's a tricky shift, one Macdonald seems aware needs to be done right. "It was really nice to be able to do a role where it's not just about her weight," she told The Guardian of Patti. That said, she also sees the value in playing a role that helps normalize all differences, be it differences in size or anything else. "I think when we normalize roles and put people in roles where you wouldn't necessarily see them — I'm talking in every way, like switching genders and different body types and different ethnicities and different sexualities — it just makes it normal and not a thing," she said in an interview with Variety. "It's not just making the story about this person in this role. It's just a role and I'm playing it."

And from the looks of it, Macdonald will have plenty of roles ahead.

More like this
'Grey's Anatomy's New Intern Got Advice From Dr. Bailey Herself
By Grace Wehniainen
Lin-Manuel Miranda & Tituss Burgess React To 'Little Mermaid' Casting Backlash
By Radhika Menon
An Extremely Messy Ranking Of What Actually Happens In 'Don't Worry Darling'
By Chloe Foussianes
Paul Mescal, Man Of Mystery
By Samantha Leach and Heather Hazzan
Get Even More From Bustle — Sign Up For The Newsletter