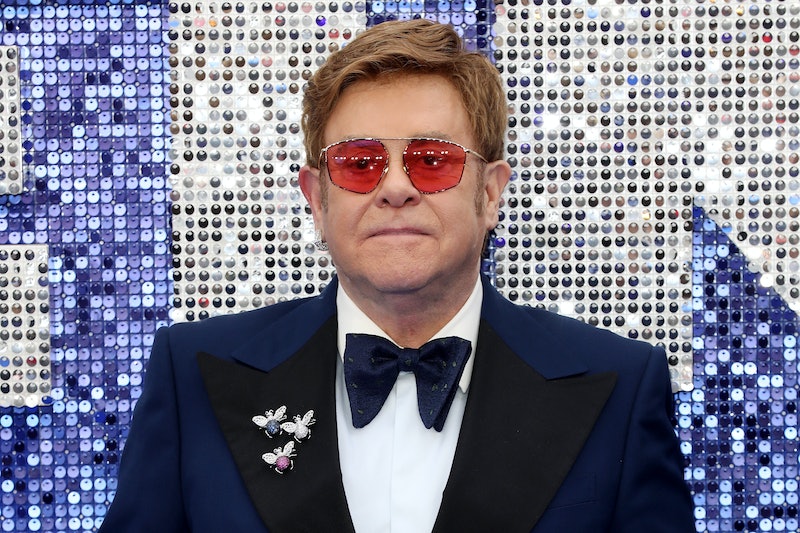 With the May 31 release of Rocketman — and also the "live-action" Lion King, for that matter — Elton John is about to have a serious resurgence in popularity. And while fans who have kept following the musician throughout his career surely know what he's up to, the flashy biopic may have others wondering what he has going on these days and whether they can get tickets to see him live sometime soon. Wasn't there talk about Elton John retiring?

Yes. Yes, there was. In January 2018, John announced that he was retiring from touring — but not right away. Obviously, first he would need to go on a 300-date final tour lasting three years. The tour, called the Farewell Yellow Brick Road tour, kicked off in September 2018 and will conclude in December 2021 with a show at The O2 in London. The tour will take him to North America, Europe, and Oceania.

But while John is going to retire from touring, he's not retiring from making music. The 72-year-old made that very clear when he announced the tour during a big event in New York City.

"When I say I'm stopping touring, I'm not stopping music," he told Anderson Cooper, who hosted the event. "I will be, hopefully, making more records. I'll be writing more musicals, or I'll be doing more exhibitions with our photography, but mostly I'll be taking my kid to soccer academy, which is the most important thing."

And his kids with husband David Furnish are the reason why John decided to throw in the towel on touring.

"My priorities have changed in my life," he explained. "Ten years ago if you’d have said I'm going to stop touring, I'd have said, 'No, no. I'm a working musician. I always play.' But we had children and that changed our lives. And in 2015, David and I sat down with their school schedule, and I thought, I don't want to miss too much of this."

John and Furnish have two children, Elijah, who is six, and Zachary, who is eight. The singer spoke about his family to Us Weekly in February and explained that his kids are pretty grounded when it comes to his fame. "They know that daddy is famous but … when we are out in the summer and people are taking our photograph or asking for a photograph, they say, ‘Why do they want your photograph?’ And we always say, ‘Because people like my music.'" He added, "They know what daddy does, but I never bring Elton home. I try to leave Elton on the stage."

While it's clear that John has no plans to stop working, just because he won't be touring, doesn't even mean that he'll stop performing. In the same interview, Us Weekly reported that John said he might be open to considering another residency "once the dust settles."

That said, during his announcement event he said that he won't go back on the decision to not tour anymore. "I'm not going to be one of these people who says, I'm going to do a world tour and then I'm retiring. I'm not Cher," John said. (Since her "farewell tour" ended in 2005, Cher has toured two more times. John did previously announce he was retiring from performing, too, way back in 1977.) "Even though I like wearing her clothes. So, this is the end."

If you'd like to see John, all the dates and tickets are listed here. It'll be your last chance. (Well, possibly.)

More like this
Everything You Need To Know About ‘Black Panther: Wakanda Forever’
By Bustle Editors
Christian Bale Sang With Taylor Swift & His Daughter Can't Believe It
By Radhika Menon
Snoop Dogg & Michelle Pfeiffer Lead Moving Tributes To Coolio
By El Hunt
Harry Styles’ Red Carpet Looks Have One Thing In Common
By El Hunt
Get Even More From Bustle — Sign Up For The Newsletter