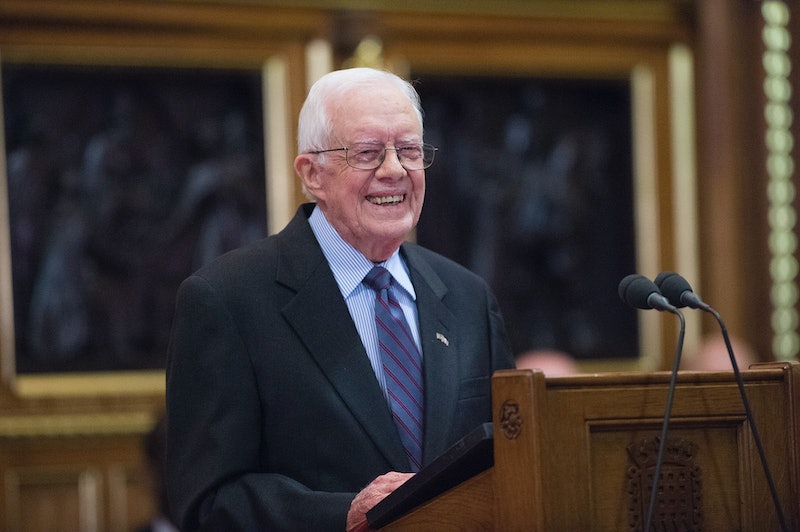 On Friday at noon local time in D.C., Donald Trump will take the oath of office and become the 45th President of the United States. In part because Trump ran a highly controversial campaign with divisive platforms, over 60 elected officials are boycotting his inauguration. But the last two Democratic presidents, Barack Obama and Bill Clinton, will be in attendance. And what about Clinton's Democratic predecessor? Will Jimmy Carter be at the inauguration?

He will, in fact, reportedly attend the event. The 39th president of the United States confirmed in December that he'd be attending Trump's swearing-in ceremony. He was the first former president to do so; after he did, Clinton announced that he and Hillary would be going to the Trump's inauguration as well.

But not all Democrats are following suit. As of this writing, over dozens of Democratic officials have announced that they will not be attending Trump's inauguration. Collectively, they've given many different justifications for this decision. Rep. John Lewis is largely responsible for starting the trend, and cited Russia's alleged interference in the election (Russia has denied these allegations) as the reason for his boycott. Some are skipping it out of solidarity with Lewis; others have pointed to Trump's worrisome comments about people of color and immigrants in explaining why they won't be there. Still others have indicated that it would be disrespectful to their constituents to attend.

Although Carter will be at the inauguration, he isn't the biggest Trump fan. While he generally kept a low profile during the campaign, he confirmed at an event in August that he planned to vote for Hillary. After Trump won, however, he said that the incoming president needs Americans' "support and our prayers." Carter later claimed that he hopes to work with Trump on disease eradication.

"Of course, [disease eradication efforts] are dependent on USAID," Carter said at a press conference in January. "I’ll be meeting with President-elect Trump and also with his new secretary of state, who is in charge of USAID, just to let them know what we are doing."

Carter defeated Gerald Ford in the 1976 presidential election but lost reelection to Ronald Reagan four years later. He announced in 2015 that he'd been diagnosed with metastatic cancer. It spread from his liver to his brain, but Carter underwent a new type of cancer treatment called immunotherapy, and months later, announced that he was cancer-free. At 92 years of age, he is the nation's second oldest living president next to George H.W. Bush.